St Patrick the Bishop of Armagh and Enlightener of Ireland 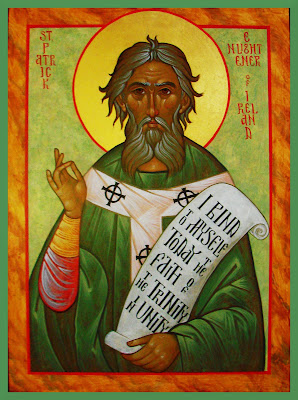 Saint Patrick, the Enlightener of Ireland was born around 385, the son of Calpurnius, a Roman decurion (an official responsible for collecting taxes). He lived in the village of Bannavem Taberniae, which may have been located at the mouth of the Severn River in Wales. The district was raided by pirates when Patrick was sixteen, and he was one of those taken captive. He was brought to Ireland and sold as a slave, and was put to work as a herder of swine on a mountain identified with Slemish in Co. Antrim. During his period of slavery, Patrick acquired a proficiency in the Irish language which was very useful to him in his later mission. 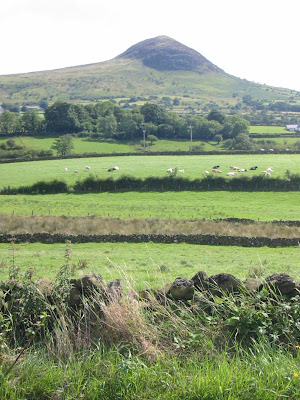 Slemish, where St. Patrick lived as a slave in his youth (source)
He prayed during his solitude on the mountain, and lived this way for six years. He had two visions. The first told him he would return to his home. The second told him his ship was ready. Setting off on foot, Patrick walked two hundred miles to the coast. There he succeeded in boarding a ship, and returned to his parents in Britain.
Some time later, he went to Gaul and studied for the priesthood at Auxerre under St Germanus (July 31). Eventually, he was consecrated as a bishop, and was entrusted with the mission to Ireland, succeeding St Palladius (July 7). St Palladius did not achieve much success in Ireland. After about a year he went to Scotland, where he died in 432.
Patrick had a dream in which an angel came to him bearing many letters. Selecting one inscribed “The Voice of the Irish,” he heard the Irish entreating him to come back to them.
Although St Patrick achieved remarkable results in spreading the Gospel, he was not the first or only missionary in Ireland. He arrived around 432 (though this date is disputed), about a year after St Palladius began his mission to Ireland. There were also other missionaries who were active on the southeast coast, but it was St Patrick who had the greatest influence and success in preaching the Gospel of Christ. Therefore, he is known as “The Enlightener of Ireland.” 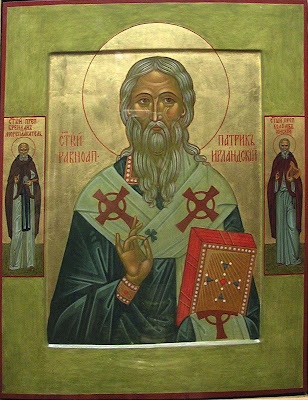 His autobiographical Confession tells of the many trials and disappointments he endured. Patrick had once confided to a friend that he was troubled by a certain sin he had committed before he was fifteen years old. The friend assured him of God’s mercy, and even supported Patrick’s nomination as bishop. Later, he turned against him and revealed what Patrick had told him in an attempt to prevent his consecration. Many years later, Patrick still grieved for his dear friend who had publicly shamed him.
St Patrick founded many churches and monasteries across Ireland, but the conversion of the Irish people was no easy task. There was much hostility, and he was assaulted several times. He faced danger, and insults, and he was reproached for being a foreigner and a former slave. There was also a very real possibility that the pagans would try to kill him. Despite many obstacles, he remained faithful to his calling, and he baptized many people into Christ.
The saint’s Epistle to Coroticus is also an authentic work. In it he denounces the attack of Coroticus’ men on one of his congregations. The Breastplate (Lorica) is also attributed to St Patrick. In his writings, we can see St Patrick’s awareness that he had been called by God, as well as his determination and modesty in undertaking his missionary work. He refers to himself as “a sinner,” “the most ignorant and of least account,” and as someone who was “despised by many.” He ascribes his success to God, rather than to his own talents: “I owe it to God’s grace that through me so many people should be born again to Him.”
By the time he established his episcopal See in Armargh in 444, St Patrick had other bishops to assist him, many native priests and deacons, and he encouraged the growth of monasticism. 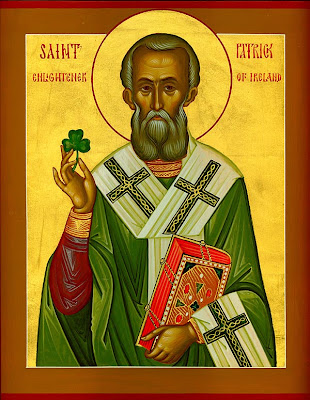 St. Patrick, using the shamrock to teach about the Holy Trinity (source)

St Patrick is often depicted holding a shamrock, or with snakes fleeing from him. He used the shamrock to illustrate the doctrine of the Holy Trinity. Its three leaves growing out of a single stem helped him to explain the concept of one God in three Persons. Many people now regard the story of St Patrick driving all the snakes out of Ireland as having no historical basis.
St Patrick died on March 17, 461 (some say 492). There are various accounts of his last days, but they are mostly legendary. Muirchu says that no one knows the place where St Patrick is buried. St Columba of Iona (June 9) says that the Holy Spirit revealed to him that Patrick was buried at Saul, the site of his first church. A granite slab was placed at his traditional grave site in Downpatrick in 1899.
(source) 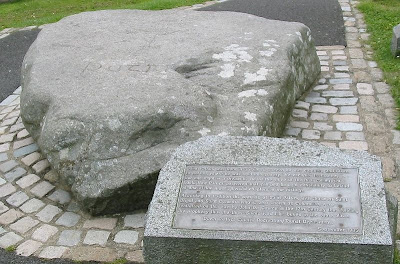 The purported grave site of St. Patrick (along with Sts. Columba and Brigid, according to tradition, whose Holy Relics were purportedly moved there in the 12th century in fulfilment of a prophecy) in Downpatrick (source)

Holy Bishop Patrick, / Faithful shepherd of Christ’s royal flock, / You filled Ireland with the radiance of the Gospel: / The mighty strength of the Trinity! / Now that you stand before the Savior, / Pray that He may preserve us in faith and love!

From slavery you escaped to freedom in Christ’s service: / He sent you to deliver Ireland from the devil’s bondage. / You planted the Word of the Gospel in pagan hearts. / In your journeys and hardships you rivaled the Apostle Paul! / Having received the reward for your labors in heaven, / Never cease to pray for the flock you have gathered on earth, / Holy bishop Patrick!
(source) 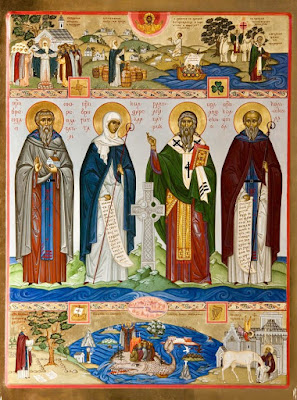 Icon depicting four great saints and enlighteners of Ireland: St. Brendan the Navigator, St. Brigit, St. Patrick and St. Columba of Iona (source)
Doxastikon of the Praises in the Plagal of the Fourth Tone (amateur translation)
Thus says the Hierarch Patrick to the Orthodox Christians who dwell on the isle of Ireland, on this island where he preached Christ: Do not fear, little flock, for you go forth through the snares of evil beliefs and you dwell among wolves who divide the flock. For behold, I am with you, who in you sowed the seed of piety and delivered the people from the delusion of the druids. Only live rightly according to the Gospel, and gather in the faith as one soul, and do not be frightened by anything that you may suffer, and I will ceaselessly pray on behalf of you, entreating for us for the remission of sins and the great mercy.
Note: Taken from the full Orthodox service to St. Patrick (in Greek), which is available here. 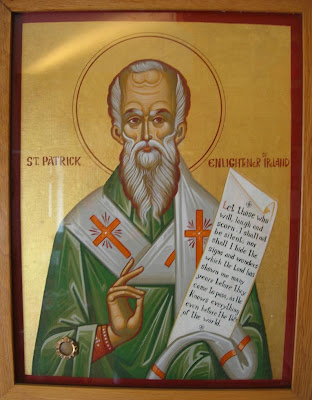 St. Patrick of Ireland (source)
Through the prayers of our Holy Fathers, Lord Jesus Christ our God, have mercy on us and save us! Amen!
Posted by Agioi_Anargyroi at 4:24 AM

Labels: Lives of the Saints, The British Isles

I'm most fascinated with the Cyrillic icon of Patrick that also has St Brendan on the left as well as an unidentified saint on the right.

Is this image copyrighted or do you know where I might obtain a copy?

I don't know if it is copyrighted or not.

The saint to the right appears to be St. Columba of Iona.