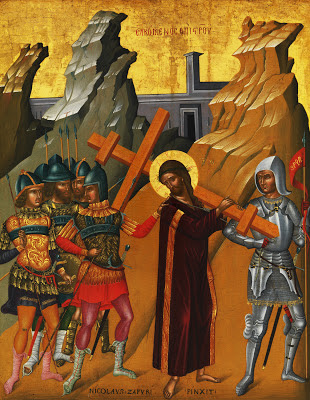 We have written, O beloved, of the medicines of repentance, that we might hasten to the harbor of salvation. We have been pierced by sin, let us be healed by repentance. Through sin the devil pierces, through repentance Christ heals. He, through sin, is overpowered by the roots of sin, while the Lord, foreseeing the sin, uprooted it with the axe of repentance. “Behold” as is written, therefore, “the axe is laid at every tree. Every tree that does not bear good fruit is cut down, and cast into the fire.” The devil sowed sin as weeds, Christ, with the sickle of repentance, did cut the weeds of sin. Sin is an evil thing, but repentance is a good thing. Let us therefore flee from that to be feared, and hasten towards that to be desired. Through sin the devil leads to Gehenna, through repentance Christ leads towards the Kingdom. Have you sinned? Be silent (hesychason), for it is not as dangerous to sin, but to remain in sin is evil, for to have an apology is to be delivered from unforgivable torture.

For as Peter sinned through denial, and Paul transgressed by persecuting Christ, and David worked adultery and murder, they became worthy of death. But though as men they sinned, they repented as saints. Though they were ensnared by the nets of sin, they shook off the outrage of impiety in the blink of an eye, and hastened towards repentance, that they might granted the remission of their offenses. Come, therefore, let us also hasten towards repentance. And though the devil has burdened us with sin, the Lord Jesus Christ, Who was born of the holy Virgin Mary, through repentance lightens the burden of sin by taking it upon Himself. “Behold,” as it is written, “the lamb of God, Who takes away the sin of the world.” For the devil placed sin within men, while the Lord took away sin from men. He gave sin, that men might be lost on behalf of sin. The Lord took on sin, that He might free human nature from impropriety. Before the coming of Christ, the devil was terrible. Before the Cross, sin was unbearable. But the Cross has ever removed the thorns of sin. The Lord Jesus appears on earth, and the devil is cast down like lightning from the earth. Behold, as it is written, “Satan falls from heaven like lightning.”

The death of Christ overpowered the kingdom of death. For death reigned from Adam until Moses, and upon those who had not sinned had come the likeness of Adam's transgression, as a type of things to come. However, after the death of the Lord, death has become a plaything and a child. Therefore, after the resurrection of Christ, we who withstood the typhoon of death say: “O death, where is your sting? O hades, where is your victory?” Before the Cross, the counsel of the evil one breathed forth death. After the Cross, after the passion of Christ, behold priests and women, young people and adolescents, as if trampling upon grapes, trample upon snakes and scorpions, and upon every power of the enemy. This I mention, that I might show the fall of sin, and the power of repentance. Do not become bitter at the thorns of sin within, nor that your sloth has given birth to sin. Do not condemn yourself that you have sinned, but punish yourself that you have not repented. Because of the infirmity of the body that the Lord knows, He permitted the medical science among men, and made herbs upon the earth for healing. In like manner, beholding the unsteadiness of the soul and the wounds of sin, as a defense for souls, granted repentance, and granted the divine and spiritual books of the ways of repentance as healing herbs, that each of us might straightaway have the bandage of healing, fleeing from passion, coming to one's self through faith. But let our repentance not remain as words alone in us, for it is improper that repentance appear through words, that the Church of our Lord Jesus Christ not be formed in reality. Confess your offenses, O man, redeem yourself from sin, that you might receive the remission of sin. Be redeemed, accept the free gift of remission of offenses...
(source)
Through the prayers of our Holy Fathers, Lord Jesus Christ our God, have mercy on us and save us! Amen!
Posted by Agioi_Anargyroi at 11:14 AM