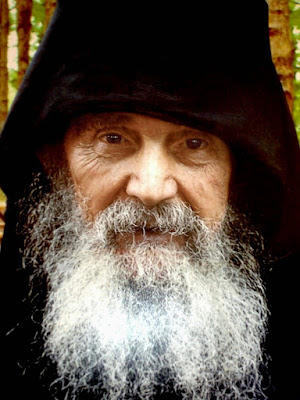 On the morning of Sunday December 8th, 2019, around 7am Greek time, and 10pm the evening before Phoenix time, Elder Ephraim of Philotheou and Arizona reposed in the Lord, full of days, after a struggle with health problems his final years. The whole previous day, his end was clearly approaching, and he communed the Spotless Mysteries. The next day, the nurses found the Elder at about 9am in an almost standing position, and had given up his spirit.

Elder Ephraim was born on June 24th, 1928 in Volos, as Ioannis Moraitis. His childhood years were passed in poverty, as he helped his father at work, while he kept the pious example of his mother (whom he tonsured later in life as a nun, named Theophano).

At the age of 14, he began to have a desire for monasticism, but he did not receive a blessing from his  then spiritual father to go to Mount Athos until he was 19 years old. 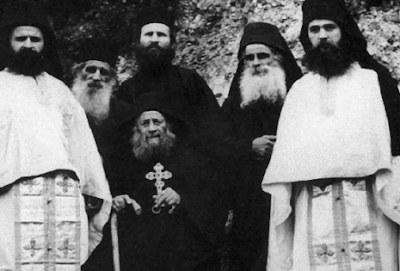 Elder Ephraim (far right), as a young priest monk in the synodeia of Elder Joseph the Hesychast (seated) (source)

With his arrival on Mount Athos on September 26, 1947, he went straightaway to Elder Joseph the Hesychast at the Cave of the Precious Forerunner, where he was received into his brotherhood. He was tonsured 9 months later, in 1948, with the name "Ephraim".

Out of obedience to his Elder, Monk Ephraim was later ordained a deacon and then a priest.

His life in the brotherhood of Elder Joseph was very austere and ascetically.

After the repose of Elder Joseph in 1959, many monks gathered around Elder Ephraim and had him as their spiritual father. 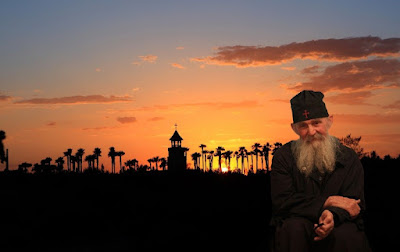 In 1973, his brotherhood moved to the Holy Monastery of Philotheou, where he became the Abbot. Due to the Elder's fame, his monastic brotherhood quickly grew quickly.

He was asked by the Holy Administration of Mount Athos to repopulate monasteries on the Holy Mountain that had gone into decline, such as Xeropotamou, Konstamonitou, and Karakallou. All of these monasteries were under the spiritual guidance of the Elder until today.

Furthermore, there are many other monasteries in Greece under the spiritual guidance of Elder Ephraim, such as the Holy Monastery of St. John the Forerunner in Serres, Panagia Odigitria in Portaria (Volos), and Archangel Michael (a former dependency of Philotheou) on the island of Thassos. 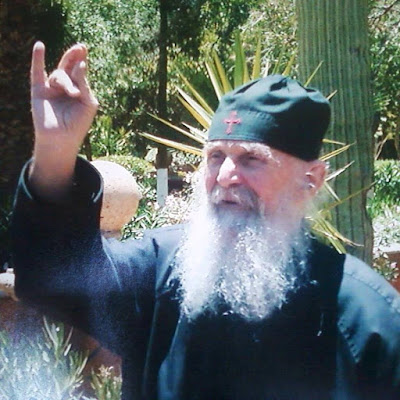 In 1979, he traveled to Canada due to health problems. As soon as he reached Cana and began testing by doctor, he began to confess people and give guidance and preach to the Greeks there. His pastoral activities later continued in the USA, and continued to multiply.

Several books have been published with his teachings (such as here and here), while his biography of Elder Joseph contains many stories from his early life on Mount Athos. 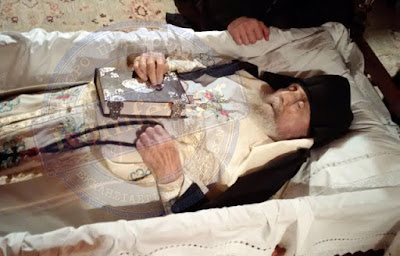 The earthly remains of Elder Ephraim of Arizona, after his repose on December 8th, 2019 (source)
May the Lord grant Elder Ephraim a blessed Paradise, may He reward his many struggles for Him all his life, may He grant consolation to his spiritual children throughout the world, and may we have his blessing!


Through the prayers of our Holy Fathers, Lord Jesus Christ our God, have mercy on us and save us! Amen!
Posted by Agioi_Anargyroi at 1:54 AM

When can pilgrims generate the remains of this holy man?