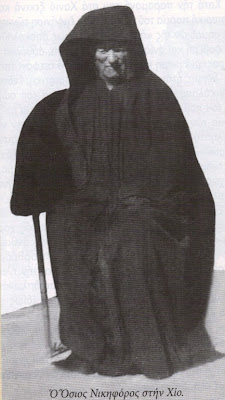 Fr. Nikephoros (in the world, Nicholas) was born in a village of Chania (Crete), in Serikari. His parents were simple and pious villagers, who while he was still a small child, died and left him an orphan. Thus, at the age of thirteen he left his home, traveled to Chania and began to work in a barbershop. There he started to show the first signs of Hansen's disease (i.e. leprosy). At that time, lepers were exiled to the island of Spinaloga, because leprosy was a transmissible disease and was treated with fear and horror. Nicholas, when he was sixteen years old and when the signs of his disease began to be more visible, to flee from enclosure on Spinaloga fled with a boat for Egypt. There he remained working in Alexandria, again in a barbershop, however the signs of his disease became even more evident, especially on his hands and face. Due to the suggestions of a cleric he fled to Chios where there was a home for lepers, in which was a priest, Fr. Anthimos Vagianos, later St. Anthimos of Chios. 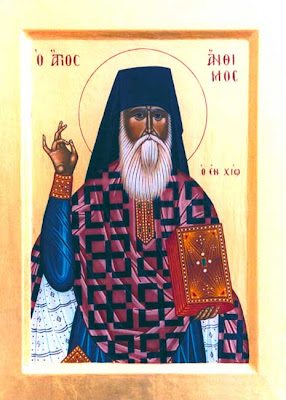 Icon of St. Anthimos of Chios (+1960) - Commemorated on February 15th (icon taken from: http://christopherklitou.com/icon_15_feb_anthimus_of_chios.htm)
Nicholas reached Chios in 1914 at the age of 24. At the leper home in Chios, where there was a grouping of many beautiful little homes, was a chapel of St. Lazaros, where was preserved the wonder-working icon of Panagia of Ypakoe (Obedience). In that place was opened the stadium of virtues for Nicholas. Within two years St. Anthimos discerned that he was ready for the angelic schema and tonsured him a monk with the name Nikephoros. The disease progressed and evolved in the absence of suitable medicines, and brought many great changes (the medicine was found later, in 1947).

Fr. Nikephoros lived with indiscriminate, genuine obedience, with austere fasting, working in gardens. He also compiled in a catalogue the miracles of St. Anthimos, which he had seen with his own eyes (many took the place of healing of the demon-possessed). 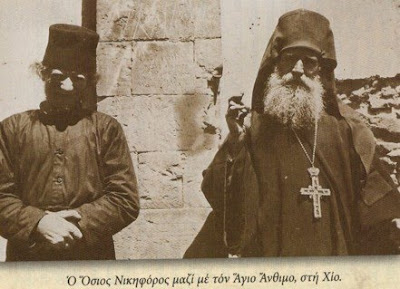 There was a unique spiritual relationship between St. Anthimos and monk Nikephoros, who “did not separate himself from him by even a step”, as mentioned by Fr. Theoklitos of Dionysiou in his book “St. Anthimos of Chios”. Fr. Nikephoros prayed for endless hours at night, performing countless prostrations, not offering a word to anyone nor spoiling his heart on anyone, and was the head chanter of the church. Because of his illness, however, slowly he lost his eyesight and most of the hymns were chanted by others.


In 1957 the Lovokomeio of Chios was closed and the remaining patients, along with Fr. Nikephoros, were sent to the Anti-Leper Station of St. Barbara in Athens, in Aigaleo. At that time Fr. Nikephoros was about 67 years old. His body parts and his eyes had been totally affected and transformed from the illness. 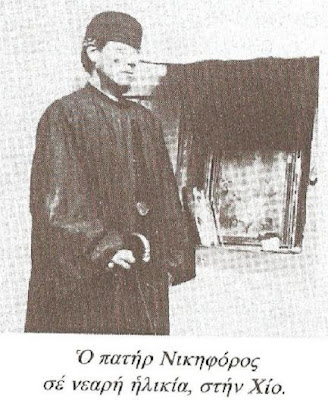 Picture of Fr. Nikephoros at a young age, in Chios (taken from: http://ierapostoli.wordpress.com/2009/02/27/tyflos_nikoforos/)

There, in the Anti-Leper station lived Fr. Eumenios, who also had Hansen's disease, but because of medical advances was totally cured. He decided however to remain for the rest of his life in the Anti-leper station near his fellow patients, who he treated with much love. Thus he became a spiritual child of Fr. Nikephoros, to whom as a reward for his patience, the Lord had granted many gifts. Many people flocked to the humble cell of the leper monk Nikephoros, at St. Barbara of Aigaleo, to receive his blessing. Those who met him mention that:

Though he was confined to bed, with wounds and pains, he did not murmur but showed great patience.

He had the grace of comforting the troubled.

His eyes were constantly irritated, his vision was minimal, and he had hooked hands and paralyzed lower extremities.

Besides all of these he was most sweet, mild, greatly smiling, relating grace-filled stories, he was enjoyable, lovable.

His face, which was eaten by the signs of his sickness and wounds, shone and imparted joy to all who saw this totally poor and phenomenally sick man who said: “Let His holy Name be glorified.”

At the age of 74, on January 4th 1964, Fr. Nikephoros reposed in the Lord. His holy relics were fragrant when they were later uncovered. Fr. Eumenios, and other pious people offered many occasions when miracles occurred at the intercessions of Fr. Nikephoros.
(from the book: Nikephoros the Leper: The Radiant Athlete of Patience, by Monk Simon, Athens 2007; amateur translation of the Greek text from: http://ierapostoli.wordpress.com/2009/02/27/tyflos_nikoforos/) 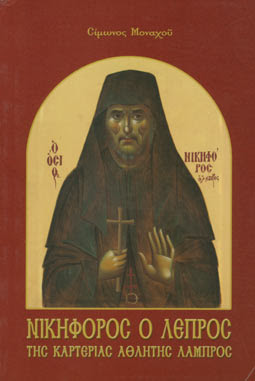 Book Cover of: Nikephoros the Leper: The Radiant Athlete of Patience (taken from: http://www.stamoulis.gr/ViewShopProduct.aspx?ProductId=377173)

On December 3rd, 2012, the Holy Synod of the Ecumenical Patriarchate of Constantinople announced their decision to officially number among the Saints, St. Nikephoros the Leper. He was a faithful disciple of St. Anthimos of Chios, a perfect example of Christ-like humility, patience and endurance in afflictions, and a great consoler of many. The following are amateur translations of selected hymns from the service of the Saint in Greek here. May St. Nikephoros intercede for us all! 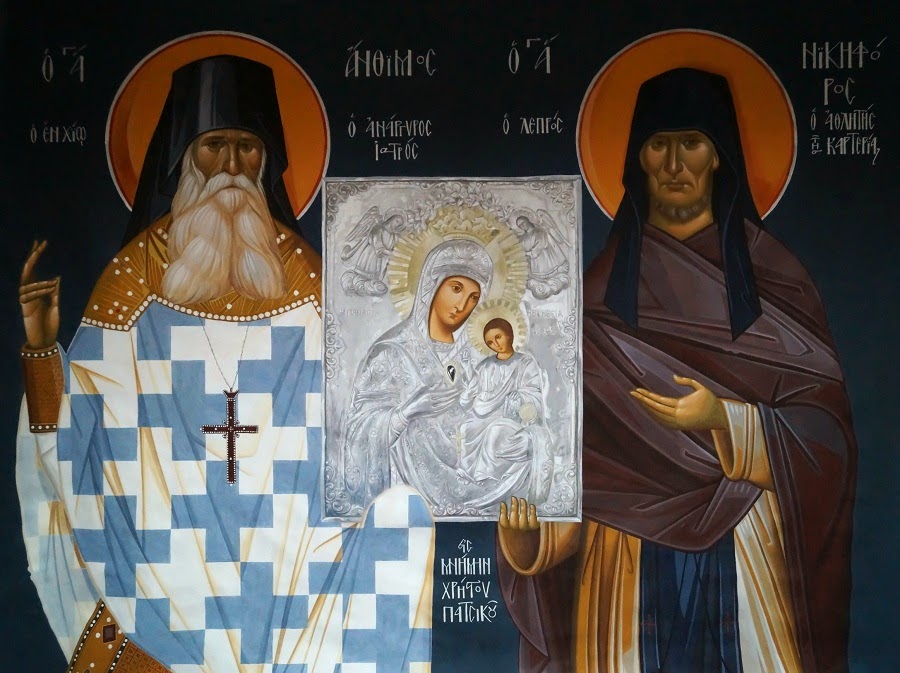 St. Anthimos of Chios with his disciple, St. Nikephoros the Leper (source)

Through the prayers of our Holy Fathers, Lord Jesus Christ our God, have mercy on us and save us! Amen!
Posted by Agioi_Anargyroi at 7:11 PM