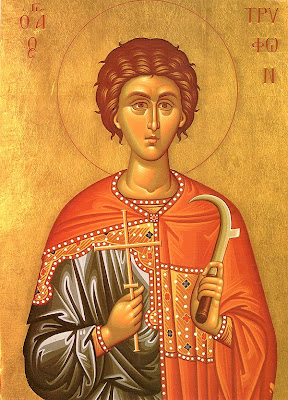 St. Tryphon the Great Martyr and Unmercenary - Commemorated on February 1st, and with the Synaxis of the Holy Unmercenaries (http://ocafs.oca.org/FeastSaintsViewer.asp?SID=4&ID=1&FSID=100397)

[He once saved the inhabitants of his native city from starvation. St Tryphon, by the power of his prayer, turned back a plague of locusts that were devouring the grain and devastating the fields. (http://ocafs.oca.org/FeastSaintsViewer.asp?SID=4&ID=1&FSID=100397)] 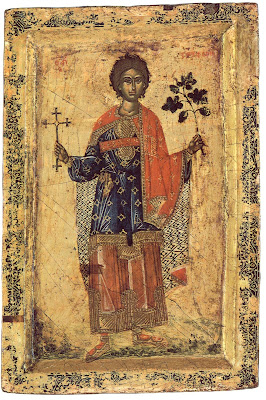 The Roman Empire at that time was ruled by Emperor Gordian whose daughter Gordiana went insane and this caused her father great sorrow. All the physicians were unable to help Gordiana. The evil spirit spoke through Gordiana and said that no one can cast him out except Tryphon. After many who were named Tryphon in the empire were summoned, by Divine Providence, young Tryphon was also summoned. He was brought to Rome and he healed the emperor's daughter. The emperor lavished upon him many gifts all of which Tryphon, upon his return, distributed to the poor. In his village this holy youngster continued to tend geese and to pray to God. When Decius, the Christ-persecutor, was crowned emperor, Saint Tryphon was tortured and cruelly tormented for Christ. He endured all tortures with great joy saying: "Oh! If only I could be made worthy to die by fire and pain for the Name of the Lord and God, Jesus Christ!"

[He was subjected to harsh tortures: they beat him with clubs, raked his body with iron hooks, they scorched his flesh with fire, and led him through the city, after iron nails were hammered into his feet. St Tryphon bravely endured all the torments without complaint.(http://ocafs.oca.org/FeastSaintsViewer.asp?SID=4&ID=1&FSID=100397)]

All sufferings did him no harm and finally the tormentors sentenced him to be beheaded. Before his death Tryphon prayed to God and gave up his soul to his Creator in the year 250 A.D." 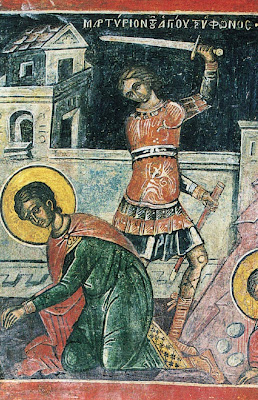 The Martyrdom of St. Tryphon the Great Martyr and Unmercenary (http://pravicon.com/images/sv/s2012/s2012004.jpg)

The Prayer of Saint Tryphon before his death
"O Lord, God of gods and King of kings, the most holy of all holies, I thank You that You made me worthy to complete my mortification without faltering. And now, I pray to You that the hand of the invisible demon does not touch me; that the demon not drag me into the abyss of destruction. Rather, let Your holy angels lead me into Your beautiful dwelling place and make me an heir of Your desired kingdom. Receive my soul and harken to the prayer of all those who would offer sacrifices to You in my remembrance. Gaze upon them from Your holy dwelling place and grant them abundant and incorruptible gifts. For You are the only good and merciful Gift-giver unto the ages of ages. Amen." Since Tryphon suffered in Nicaea and since many miracles occurred over his lifeless body, the citizens of Nicaea wanted to bury Tryphon in their cemetery. But, the saint appeared in a vision and expressed his desire that he be translated to his village of Lampsacus where he once tended geese and to be buried there."
(http://www.westsrbdio.org/prolog/prolog.htm)

The Veneration of St. Tryphon in Nicaea
"[Nicaea] was the scene of the martyrdom of St. Tryphon, a victim of the persecutions of Decius (249-251). The saint was actually buried in his home village in Phrygia, but his presence was manifested in his church in Nicaea every February 1st. On that day, at the morning service, while hymns were being sung in the saint's honor, a vast crowd witnessed the miracle: dried lily bulbs put in the martyr's lamp suddenly bloomed out of season amid the frosts of winter. A thirteenth-century emperor, Theodore II Laskaris, described the miracle, the accompanying festival, and the great crowds of people who came to receive the blessings of the saint and experience his power to drive away demons and cure ills. Tryphon was the patron saint of the empire in exile, and his image and lily appeared on its coins. His miracle was the great attraction of its capital, Nicaea."
(http://www.jstor.org/stable/pdfplus/1291859.pdf)

For more on the Veneration of St. Tryphon throughout the Roman Empire, see: http://www.johnsanidopoulos.com/2010/02/veneration-of-st-tryphon-in-roman.html. 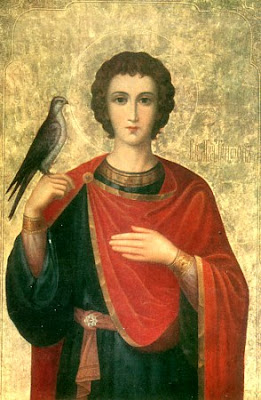 St. Tryphon in Russia
"In Russia, St Tryphon is regarded as the patron saint of birds. There is a story that when Tsar Ivan the Terrible was out hunting, his falconer carelessly allowed the Tsar's favorite falcon to fly away. The Tsar ordered the falconer Tryphon Patrikeiev to find the bird within three days, or else he would be put to death. Tryphon searched all through the forest, but without luck.

On the third day, exhausted by long searching, he returned to Moscow to the place called Marinaya Grove. Overcome with weariness, he lay down to rest, fervently praying to his patron saint, the Martyr Tryphon, for help.

In a dream he saw a youth on a white horse, holding the Tsar's falcon on his hand. The youth said, "Take the lost bird, go to the Tsar and do not grieve." When he awakened, the falconer actually spotted the falcon on a pine tree. He took it to the Tsar and told him about the miraculous help he received from the holy Martyr Tryphon. Grateful to St Tryphon for saving his life, Tryphon Patrikeiev built a chapel on the spot where the saint appeared. Later on, he also built a church dedicated to the holy Martyr Tryphon in Moscow.

The holy martyr is greatly venerated in the Russian Orthodox Church as the heavenly protector of Moscow. Many Russian icons depict the saint holding a falcon on his arm."
(http://ocafs.oca.org/FeastSaintsViewer.asp?SID=4&ID=1&FSID=100397) 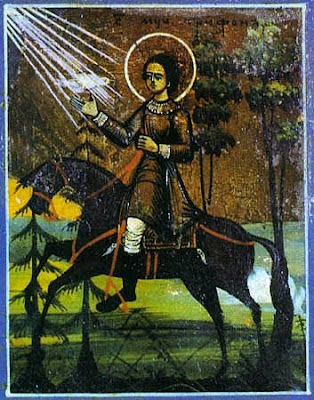 St. Tryphon in the Greek tradition is a protector of farmers, fields, gardens and vineyards, and helps deliver from various pests. For more see: http://full-of-grace-and-truth.blogspot.com/2010/01/prayer-to-st-tryphon-for-deliverance-of.html, http://full-of-grace-and-truth.blogspot.com/2010/01/st-tryphon-great-martyr-and-monastery.html.

May St. Tryphon intercede for us and help us! 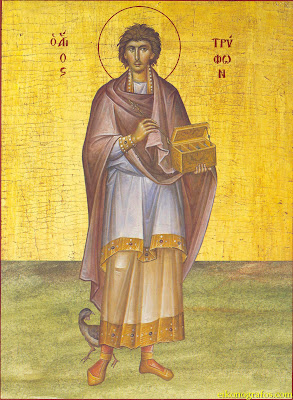 
Troparion of St Tryphon Tone 3
In the Holy Spirit thou didst pour forth abundant grace on the Church like an unfailing fountain; thou dost refresh our souls with the delight of thy gifts. O glorious Tryphon, entreat Christ our God to grant us His great mercy.
(http://www.stnectarios.org/menologion/feb.pdf)
Kontakion - Tone 8
By the power of the Trinity you destroyed polytheism to the ends of the earth, and you were honored by Christ, all-glorious Tryphon; having conquered tyrants through Christ the Savior, you received your crown of martyrdom and the gift of divine healing, for you are invincible.
(http://www.oca.org/FStropars.asp?SID=13&ID=100397) 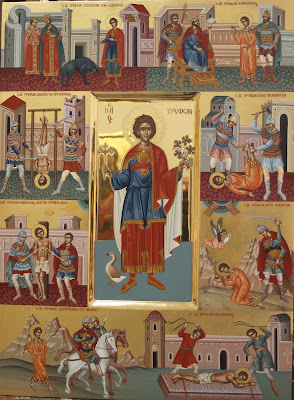 St. Tryphon with scenes from his life (source)
Through the prayers of our Holy Fathers, Lord Jesus Christ our God, have mercy on us and save us! Amen!
Posted by Agioi_Anargyroi at 4:13 PM