Sayings of St. Syncletika the Righteous of Alexandria 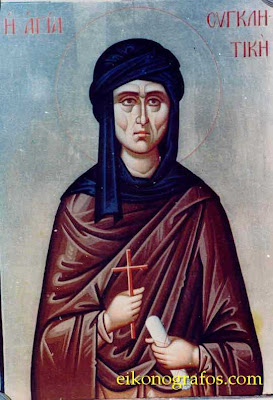 St.Syncletiki (Syncletika) the Righteous of Alexandria - Commemorated on January 5th (Icon courtesy of www.eikonografos.com used with permission)
Sayings of St.Syncletika the Righteous of Alexandria
“Amma Syncletica said: In the beginning there is struggle and a lot of work for those who come near to God. But after that there is indescribable joy. It is just like building a fire: at first it is smoky and your eyes water, but later you get the desired result. Thus we ought to light the divine fire in ourselves with tears and effort.

She also said: Those who put out to sea at first sailed with a favourable wind; then the sails spread, but later the wind becomes adverse. Then the ship is tossed by the waves and is no longer controlled by the rudder. But when in a little while there is calm, and the tempest dies down, then the ship sails on again. So it is with us, when we are driven by the spirits who are against us; we hold to the cross as our sail and so we can set a safe course.
She also said: There is an asceticism which is determined by the enemy and his disciples practise it. So how are we to distinguish between the divine and royal asceticism and the demonic tyranny? Clearly through its quality of balance.”
The holy Syncletica said, "I think that for those living in community obedience is a greater virtue than chastity, however perfect. Chastity carries within it the danger of pride, but obedience has within it the promise of humility."
Someone asked Amma Syncletica of blessed memory, "Is absolute poverty perfect goodness?"
She replied, "It is a great good for those capable of it; even those who are not capable of it find rest for their souls in it though it causes them anxiety. As tough cloth is laundered pure white by stretched and trampled underfoot, so a tough soul is stretched by freely accepting poverty."
Amma Syncletica said, "We ought to govern our souls with discretion and to remain in the community, neither following our own will nor seeking our own good. We are like exiles: we have been separated from the things of this world and have given ourselves in one faith to the one Father. We need nothing of what we have left behind. There we had reputation and plenty to eat; here we have little to eat and little of everything else."
Amma Syncletica said, "In the beginning there are a great many battles and a good deal of suffering for those who are advancing towards God and, afterwards, ineffable joy. It is like those who wish to light a fire. At first they are choked with smoke and cry, until they obtain what they seek. As it is written, "Our God is a consuming fire" (Hebrews 12:24); so we also must kindle the divine fire in ourselves through tears and hard work."
Amma Syncletica said, "There are many who live in the mountains and behave as if they were in the town, and they are wasting their time. It is possible to be a solitary in one's mind while living in a crowd, and it is possible for one who is a solitary to live in the crowd of his own thoughts."
She also said, Choose the meekness of Moses and you will find your heart which is a rock changed into a spring of water.
She also said, "Just as a treasure that is exposed loses its value, so a virtue which is known vanishes; just as wax melts when it is near fire, so the soul is destroyed by praise and loses all the results of its labour."
She also said, "Just as one cannot build a ship unless one has some nails, so it is impossible to be saved without humility."
She also said, "It is dangerous for anyone to teach who has not first been trained in the practical life. For if someone who owns a ruined house receives guests there, he does them harm because of the dilapidation of his dwelling. It is the same in the case of someone who has not first built an interior dwelling; he causes loss to those who come. By words one may convert them to salvation, but by evil behaviour, one injures them.”
(taken from: http://www.monachos.net/content/patristics/patristictexts/223-syncletia-sayings?format=pdf)
For the life of St. Syncletiki, see: http://ocafs.oca.org/FeastSaintsViewer.asp?SID=4&ID=1&FSID=100099.

St. Sykglitike the Righteous (Icon courtesy of www.eikonografos.com used with permission)
Through the prayers of our Holy Fathers, Lord Jesus Christ our God, have mercy on us and save us! Amen!
Posted by Agioi_Anargyroi at 7:09 AM

Labels: Quotes of the Fathers

hi my holy sisters and brother, I am just working on my weekly assignment on the desert mothers and fathers, among them is amma Syncletica, and her sayings, I am interested in knowing everything about her, though Coptic Alexandrian myself, it is the first time I know her name and her story. blessed she is a great ascetic woman , still trying to unearth the secrets of her pursuing God for perfection in Jesus Christ.

hi my holy sisters and brother, I am just working on my weekly assignment on the desert mothers and fathers, among them is amma Syncletica, and her sayings, I am interested in knowing everything about her, though Coptic Alexandrian myself, it is the first time I know her name and her story. blessed she is a great ascetic woman , still trying to unearth the secrets of her pursuing God for perfection in Jesus Christ.