St. Thomaïs the Righteous of Lesvos 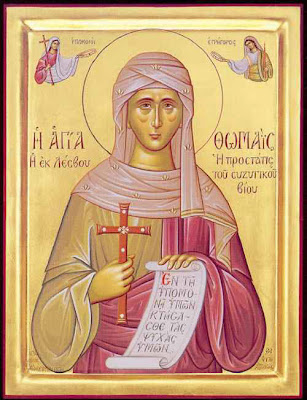 St. Thomaïs the Righteous of Lesvos - Commemorated on January 3rd (icon taken from: http://vatopaidi.files.wordpress.com/2010/01/03_thomais.jpg)
Note: The incredible, virtuous life of St. Thomais, a protector of the married life, is a wonderful example of the love, patience and forbearance that should exist between Christian husbands and wives. However, this in no way justifies the domestic abuse that she suffered at the hands of her husband. As St. Paul mentions in his Epistle to the Ephesians (the portion read during the Orthodox Wedding Service): "Even so husbands should love their wives as their own bodies. He who loves his wife loves himself For no man ever hates his own flesh, but nourishes and cherishes it, as Christ does the church, because we are members of his body." May St. Thomais intercede for all of us and help us!

St. Thomais was from the island of Lesvos and was born between 910-913 AD from pious and rich parents. They were childless, but with the Grace of God and the intercessions of the Panagia, they brought the Saint into the world. The Saint, after pressures and great desires of her parents, was married to a man named Stephanos. And because she was very pious and virtuous, she endured the barbaric behavior of her husband, who beat her severely every day [for thirteen years]. The Saint countered this temptation with prayer, patience and charity. God made her worthy of the grace of wonder-working.

Icon of St. Thomais (Icon courtesy of www.eikonografos.com used with permission)
St. Thomais righteously fell asleep in peace at the age of 38 and was buried in the convent named “Mikra Romaiou”, or “Romaiou”, which was between Selyvria and Polyandriou on the seventh hill of Constantinople. Forty days after her burial, her holy relic was uncovered and placed in a luxurious reliquary inside the church of the monastery. [Her body] was incorrupt and on her precious hands are discerned the wounds from her husband. In older times her memory was celebrated on January 1st, but after the 10th century the celebration of her memory was transferred to January 3rd, as the day of her death was the same as the feasts of Christ's Circumcision and St. Basil the Great. Her precious body was lost, most likely during the sack of Constantinople by the Latins (1204).

Her grave and her sacred relic became a spring of miracles. A demon-possessed man named Konstantinos, who approached her tomb, was healed. A paralytic named Eutychianos, who prayed and embraced her tomb stood on his feet. A nun with terrible pains in the head was healed and another with epilepsy was also healed. A fisherman found his torn nets in the sea filled with fish. A woman with terrible stomach pains was healed and from gratitude built a magnificent arch above her grave. As a final miracle [presented here], her husband, who after her death became possessed, was healed. They placed him in chains and let him to the Saint's tomb and he was healed.
(amateur translation and summary of Greek texts from: http://www.synaxaristis.googlepages.com/3ιανουαριου, http://www.pigizois.net/agiologio/lesviako_agiologio/10.htm; Note, the full Greek text of the life of the Saint is available here: http://www.fordham.edu/halsall/basis/thomais-uni.html)

For a modern miracle of the Saint, see: http://full-of-grace-and-truth.blogspot.com/2010/01/modern-miracle-of-st-thomais-righteous.html. May St. Thomais intercede for us all and help us! 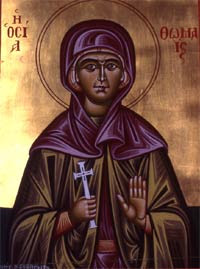 Thank God for Holy Women. St. Thomais heal my wife, she left the family to live a life of immorality.

Did your wife come back for reconciliation of marriage?