St. Anthony and the Cobbler 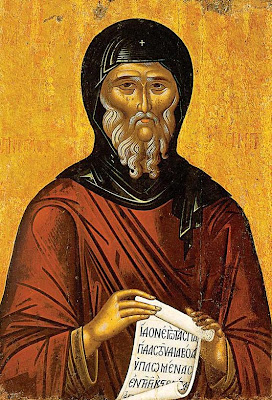 St. Anthony the Great (taken from: http://vatopaidi.files.wordpress.com/2010/01/st-anthony-the-great2.jpg)
St. Anthony and the Cobbler (amateur translation)
St. Anthony the Great once prayed: “Lord, reveal to me how the faithful person in the city among the noise can reach the spiritual level of the ascetic who dwells in the deep desert.”

He had not even finished this request to the All-good God when he heard a voice tell him:

“The Gospel is the same for all men, Anthony. And if you want to confirm this, how one who does the will of God is saved and sanctified wherever he is, go to Alexandria to the small cobbler's store, which is simple and poor. It is there below the last road of the city.”

“To the cobbler's store, Lord? And who there can help shine some light on my thought?” replied the puzzled Saint.

“The cobbler will explain to you.” replied the same voice.

“The cobbler? What does this man know about struggles and temptations? What does the poor toiler know of the heights of faith and of the truth?” He wondered.

His objections however could not be straightened by the divine explanation. Because of this, at dawn he traveled to the city. However, as God had shown him, he stopped at the small cobbler store that he found.

Happily and reverently the simple man welcomed him in and asked him: “In what way could I be of use to you, Abba? I'm an illiterate and uncouth villager, but for the stranger, whoever he is, I will try to help, whatever the need.”

“The Lord sent me for you to teach me.” replied the ascetic humbly.

The poor worker jumped up in wonder. “Me? What could I, the illiterate one, teach your holiness? I don't know if I have done anything good or noteworthy in my life, something which could stand unadulterated before the eyes of God.”

“Tell me what you do, how you pass your day. God knows; He weighs and judges things differently.” replied St. Anthony.

“I, Abba, have never done anything good, I only struggle to keep the holy teachings of the Gospel. And further, I try to never forget to never overlook my shortcomings and my spiritual fruitlessness. Therefore, as I work during the day I think and say to myself: O wretched man, all will be saved and only you will remain fruitless. Because of your sin, you will never be worthy to see His Holy Face.”

“Thank you O Lord.” the ascetic said raising his weeping eyes towards heaven. And as the cobbler remained puzzled at this, the ascetic embraced him with love and bid him farewell saying:
“And thank you, O holy man. Thank you, for you taught me how easy it is with only a humble mind, for someone to live in the grace of Paradise.”

And as the poor cobbler continued to stare uneasily, without at all understanding this, St. Anthony took his staff and departed for the deep desert.

He walked, his only companion being the sound of his staff. He walked and his prayer burned like the the sands of the desert, rising towards heaven.

He traveled all day and prayerfully reflected on the lesson that he received that day from the poor cobbler.

“Humility! This therefore is the quickest path to the gate of Paradise.” he said in his thoughts. “Humility is the robe which God clothed himself with and came to earth as man.” the Saint said, and he struggled to perceive the greatness of this holy virtue.

He walked, praying in his nous, and he brought to mind whatever God had taught him, until immediately before him he saw thrown underfoot a countless number of traps. Traps of every sort, terrible notions, machinations never before seen.

“My God” he exclaimed and turned the frightened eyes of his soul towards heaven. “Who could ever flee, O Lord, from such traps and ruses?


Through the prayers of our Holy Fathers, Lord Jesus Christ our God, have mercy on us and save us! Amen!
Posted by Agioi_Anargyroi at 2:09 PM

Labels: Humility, Lives of the Saints, St. Anthony the Great

Is there an icon of the cobbler? Where can I see a copy?

Is there an icon of the cobbler somewhere? Id like to see a copy.

I first met a briefer version of this story in a book by the French priest and spiritual writer, Jean Lafrance. Father Lafrance felt from the beginning of his ministry the call to a life consecrated to prayer. After a long time in a monastery he shared his spiritual discoveries in France and elsewhere in preaching retreats and in publishing books of which the continuing theme was a word of the Curé of Ars : "Man is a poor thing who needs to ask everything from God."

Worth mentioning in the coptic version of the story rather than a cobbler the man is a physician. Presumably because of the high regard they seem to place on being a medical doctor.