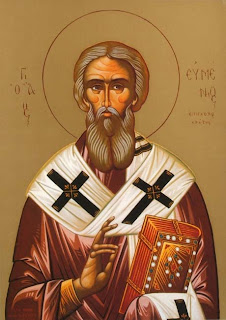 Saint Eumenius, Bishop of Gortyna on Crete - Commemorated on September 18th (icon taken from: http://vatopaidi.files.wordpress.com/2009/09/saint-eumenius-of-crete.jpg)
"From his youth, Eumenius wholeheartedly followed Christ, freeing himself of two heavy burdens: the burden of wealth and the burden of the flesh. He freed himself of the first burden by distributing his entire estate to the poor and needy, and the second burden by strict fasting. In this way he first healed himself, and then began to heal others. Passionless and filled with the grace of the Holy Spirit, Eumenius shone with a light that could not be hidden. As it is written, A city that is set on an hill cannot be hid (Matthew 5:14), so the holy Eumenius could not be hidden from the world. Witnessing his goodness, the people chose him as Bishop of Gortyna, and he governed the flock of Christ as a good shepherd. He was a father to the poor, wealth to the needy, consolation to the sorrowful, a healer of the sick and a most wonderful miracle-worker. By his prayers, he worked many miracles: he subdued a poisonous serpent, cast out demons and healed many of the sick-and he did this not only in his own town, but also in Rome and in the Thebaid. In a time of drought in the Thebaid, he obtained rain from God by prayer." (taken from: http://www.westsrbdio.org/prolog/prolog.htm)
"St Eumenius wisely and zealously defended the Orthodox Faith against the Monophysite heresy. For his opposition to the heresy the saint was banished to the Thebaid, where he died in the seventh century. His body was then transferred and buried in Gortyna." (taken from: http://ocafs.oca.org/FeastSaintsViewer.asp?SID=4&ID=1&FSID=102653)
Apolytikion in the Plagal of the Fourth Tone
You are a guide of Orthodoxy, a teacher of piety and modesty, a luminary of the world, the God inspired pride of monastics. O wise Eumenios, you have enlightened everyone by your teachings. You are the harp of the Spirit. Intercede to Christ our God for the salvation of our souls.
Kontakion in the Second Tone
Illumined with light from God on high, O blessed one, thou shinest on us, who lovingly acclaim with hymns thy most holy glorious and august repose, O Eumenius; for thou ever prayest for us, O Father, thou faithful Hierarch of the Lord.
(taken from: http://goarch.org/chapel/saints_view?contentid=209)
Through the prayers of our Holy Fathers, Lord Jesus Christ our God, have mercy on us and save us! Amen!
Posted by Agioi_Anargyroi at 9:14 AM

Labels: Crete, Lives of the Saints