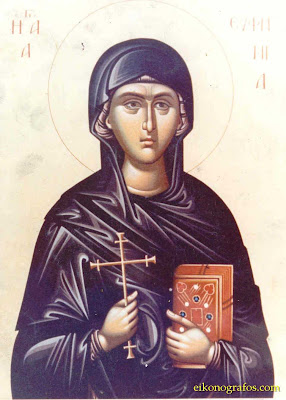 
"The Holy Great Martyr Euphemia the All-Praised was the daughter of Christians, the senator Philophronos and Theodosia. She suffered for Christ in the year 304 in the city of Chalcedon, on the banks of the Bosphorus opposite Constantinople.

The Chalcedon governor Priscus circulated an order to all the inhabitants of Chalcedon and its surroundings to appear at a pagan festival to worship and offer sacrifice to an idol of Ares, threatening grave torments for anyone who failed to appear. During this impious festival, 49 Christians were hidden in one house, where they secretly attended services to the True God.

The young maiden Euphemia was also among those praying there. Soon the hiding place of the Christians was discovered, and they were brought before Priscus to answer for themselves. For nineteen days the martyrs were subjected to various tortures and torments, but none of them wavered in their faith nor consented to offer sacrifice to the idol. The governor, beside himself with rage and not knowing any other way of forcing the Christians to abandon their faith, sent them for trial to the emperor Diocletian. He kept the youngest, the virgin Euphemia, hoping that she would not remain strong if she were all alone.

St Euphemia, separated from her brethren in faith, fervently prayed the Lord Jesus Christ, that He strengthen her in her impending ordeal. Priscus at first urged the saint to recant, promising her earthly blessings, but then he gave the order to torture her. 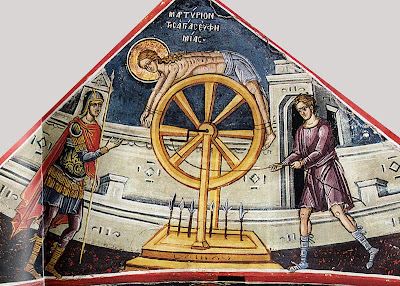 The martyr was tied to a wheel with sharp knives, which cut her body. The saint prayed aloud, and as it happened, the wheel stopped by itself and would not move even with all the efforts of the executioners. An angel of the Lord, came down from Heaven, removed Euphemia from the wheel and healed her of her wounds. The saint gave thanks unto the Lord with gladness. 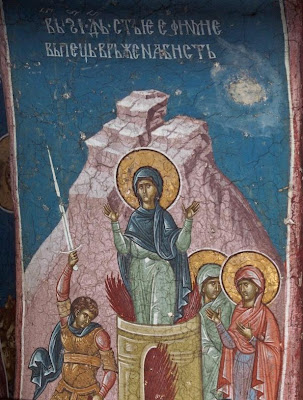 Detail of fresco of the Martyrdom of St. Euphemia, from Decani Monastery (taken from: http://www.srpskoblago.org/Archives/Decani/exhibits/Menologion/September/CX4K3353_l.html)
Not perceiving the miracle that had occurred, the torturer ordered the soldiers Victor and Sosthenes to take the saint to a red-hot oven. But the soldiers, seeing two fearsome angels in the midst of the flames, refused to carry out the order of the governor and became believers in the God Whom Euphemia worshipped. Boldly proclaiming that they too were Christians, Victor and Sosthenes bravely went to suffering. They were sent to be eaten by wild beasts. During their execution, they cried out for mercy to God, asking that the Lord would receive them into the Heavenly Kingdom. A heavenly Voice answered their cries, and they entered into eternal life. The beasts, however, did not even touch their bodies.

St Euphemia, cast into the fire by other soldiers, remained unharmed. With the help of God she emerged unharmed after many other tortures and torments. Ascribing this to sorcery, the governor gave orders to dig out a new pit, and filling it with knives, he had it covered over with earth and grass, so that the martyr would not notice the preparation for her execution. 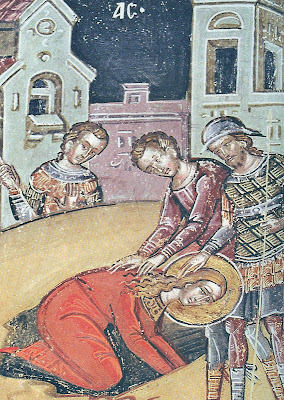 Another fresco (16th Century) of the Martyrdom of St. Euphemia, from the Holy Monastery of St. Bessarion, Douskiou (taken from: http://vatopaidi.files.wordpress.com/2009/07/0050_11-copy.jpg)
Here also St Euphemia remained safe, easily passing over the pit. Finally, they sentenced her to be devoured by wild beasts at the circus. Before execution the saint began to implore that the Lord deem her worthy to die a violent death. But none of the beasts, set loose at her in the arena, attacked her. Finally, one of the she-bears gave her a small wound on the leg, from which came blood, and immediately the holy Great Martyr Euphemia died. During this time there was an earthquake, and both the guards and the spectators ran in terror, so that the parents of the saint were able to take up her body and reverently bury it not far from Chalcedon.

A majestic church was afterwards built over the grave of the Great Martyr Euphemia. At this temple the sessions of the Fourth Ecumenical Council took place in the year 451. At that time, the holy Great Martyr Euphemia confirmed the Orthodox confession in a miraculous manner, and exposed the Monophysite heresy. Details of this miracle are related under July 11. 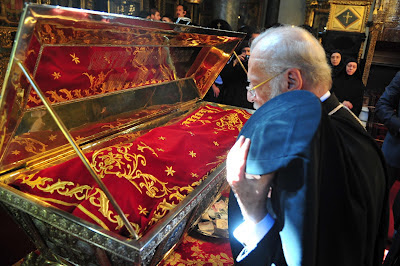 Patriarch Bartholomew venerating the Holy Relics of St. Euphemia the Great Martyr, which reside in the Phanari in the Patriarchal Church of St. George, Constantinople. (http://4.bp.blogspot.com/-cy6D2DMwNY0/UFYBa4WBkFI/AAAAAAAAGFM/IBYsVUkySKo/s1600/patr+proskynaei+leipsano2.jpg)
With the taking of Chalcedon by the Persians in the year 617, the relics of the holy Great Martyr Euphemia were transferred to Constantinople (in about the year 620). During the Iconoclast heresy, the reliquary with the relics of St Euphemia appears to have been thrown into the sea. Pious sailors recovered them. They were afterwards taken to the Island of Lemnos, and in the year 796 they were returned to Constantinople." (taken from: http://ocafs.oca.org/FeastSaintsViewer.asp?SID=4&ID=1&FSID=102626)

See previous post for info on the miracles of St. Euphemia at the Fourth Ecumenical Council (Celebrated July 11th) and with Elder Paisios the Athonite: http://full-of-grace-and-truth.blogspot.com/2009/07/miracle-of-st-euphemia-great-martyr-and.html. 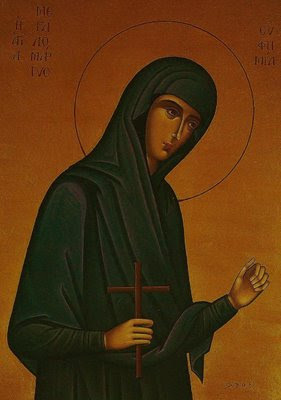 Apolytikion in the Fourth Tone
O Lord Jesus, unto Thee Thy lamb doth cry with a great voice: O my Bridegroom, Thee I love; and seeking Thee, I now contest, and with Thy baptism am crucified and buried. I suffer for Thy sake, that I may reign with Thee; for Thy sake I die, that I may live in Thee: accept me offered out of longing to Thee as a spotless sacrifice. Lord, save our souls through her intercessions, since Thou art great in mercy.

Kontakion in the Fourth Tone
Thou strovest valiantly in thy sacred contest; and even after death, thou makest us holy with streams of healings, O all-famed Euphemia. For this cause we venerate thy most holy dormition and with faith we stand before thine all-ven'rable relics, that we be freed from illness of the soul and also draw forth the grace of thy miracles.
(other hymns taken from: http://goarch.org/chapel/saints_view?contentid=207)
Through the prayers of our Holy Fathers, Lord Jesus Christ our God, have mercy on us and save us! Amen!
Posted by Agioi_Anargyroi at 9:48 AM