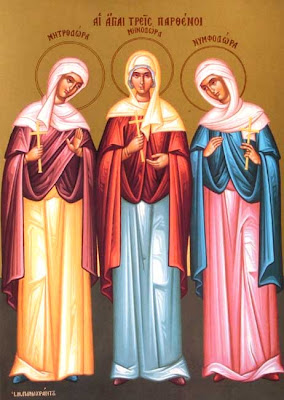 
"The Holy Virgins Menodora, Nymphodora, and Metrodora (305-311), were sisters from Bithynia (Asia Minor). Distinguished for their special piety, they wanted to preserve their virginity and avoid worldly associations. They chose a solitary place for themselves in the wilderness and spent their lives in deeds of fasting and prayer.
Reports of the holy life of the virgins soon spread, since healings of the sick began to occur through their prayers. The Bithynia region was governed at that time by a man named Frontonus, who ordered that the sisters be arrested and brought before him.
At first he tried to persuade them to renounce Christ, promising great honors and rewards. But the holy sisters steadfastly confessed their faith before him, rejecting all his suggestions. They told him that they did not value the temporal things of this world, and that they were prepared to die for their Heavenly Bridegroom, for death would be their gateway to eternal life.
Flying into a rage, the governor took out his wrath on St Menodora, the eldest sister. She was stripped of her clothes and beaten by four men, while a herald urged her to offer sacrifice to the gods. The saint bravely endured the torments and cried out, "Sacrifice? Can't you see that I am offering myself as a sacrifice to my God?" Then they renewed their torments with even greater severity. Then the martyr cried out, " Lord Jesus Christ, joy of my heart, my hope, receive my soul in peace." With these words she gave up her soul to God, and went to her Heavenly Bridegroom.
Four days later, they brought the two younger sisters Metrodora and Nymphodora to the court. They showed them the battered body of their older sister to frighten them. The virgins wept over her, but remained steadfast.
Then St Metrodora was tortured. She died, crying out to her beloved Lord Jesus Christ with her last breath. Then they turned to the third sister, Nymphodora. Before her lay the bruised bodies of her sisters. Frontonus hoped that this sight would intimidate the young virgin.
Pretending that he was charmed by her youth and beauty, he urged her to worship the pagan gods, promising great rewards and honors. St Nymphodora scoffed at his words, and shared the fate of her older sisters. She was tortured and beaten to death with iron rods.
The bodies of the holy martyrs were to be burned in a fire, but a heavy rain extinguished the blazing fire, and lightning struck down Frontonus and his servant. Christians took up the bodies of the holy sisters and reverently buried them at the so-called Warm Springs at Pythias (Bithynia).
Part of the relics of the holy martyrs are preserved on Mt. Athos in the Protection cathedral of the St Panteleimon Russian monastery, and the hand of St Metrodora is on the Holy Mountain in the monastery of the Pantocrator." (taken from: http://ocafs.oca.org/FeastSaintsViewer.asp?SID=4&ID=1&FSID=102557) 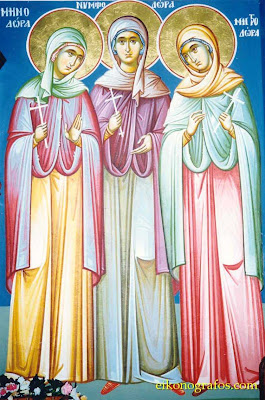 Troparion - Tone 4
O Holy Martyrs, you wisely exchanged horrible torture and bitter death for Eternal Life! Three virgins, you confessed the unoriginate Trinity at an evil council, And for this reason were slain by the sword, Following the way of the Lamb who was slain! Now ever pray for us who commemorate your holy memory!
Troparion - Tone 1
Let all who rejoice at their triumph honor these three virgin martyrs, who are united to God as sisters and who pour forth fair streams of grace: Menodora, Metrodora, and Nymphodora, who were in all things courageous; they ever pray to the Trinity for us.
Kontakion - Tone 4
Invincible in your struggles for the Holy Trinity, And through your love for each other as sisters, you defeated the foe of your spiritual life, And with the five virgins, entered victoriously into the Heavenly Mansions Where you ever rejoice with the angels in the presence of the King of All!
(taken from: http://www.oca.org/FStropars.asp?SID=13&ID=102557)
Through the prayers of our Holy Fathers, Lord Jesus Christ our God, have mercy on us and save us! Amen!
Posted by Agioi_Anargyroi at 10:11 AM