St. Theodora of Vasta and her miraculous chapel 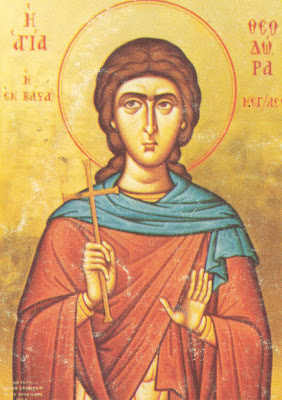 Icon of St. Theodora the Righteous Martyr of Vasta (taken from: http://vatopaidi.files.wordpress.com/2009/09/theodora-vasta.jpg)
One of the Saints celebrated today (Semptember 11th) is St. Theodora, the Righteous Martyr of Vasta. Her church in the Peloponnese has become a great place of pilgrimage in Greece, where many hasten for healings of soul and body, or solely to see the miraculous trees that are part of her chapel.
Accounts of her life seem to differ. Some say that she went to serve in the army, as her parents had no other male heir, and it was there that she was killed. Some say that she lived as a nun, and she was later slanderously accused of fathering a child with a young girl of the area, for which she was killed (or various combinations of these). Some also say that the accounts of her life have similarities to St. Theodora of Alexandria, who also celebrates on September 11th. In any case, she is clearly considered a Righteous Martyr, and a great Saint and miracle-worker of the Church. 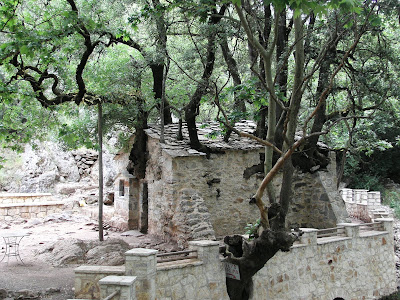 A picture of the miraculous Church of St. Theodora of Vasta, with 17 trees coming from the roof, and watered by an underground spring of Holy Water (this and many other pictures available here: http://users.hol.gr/~spyrosy/vasta/)
On her death bed, tradition holds that she prayed: "My Christ, forgive my enemies. Let my body become a church, my hair a forest of trees, and my blood a spring to water them." This became true, for at the site of her martyrdom was built a church. "This small chapel supports 17 large trees that emerge from the roof and the walls of the chapel. Each tree weighs close to a ton and stands over 20 meters high. For hundreds of years, the roots have not been visible. Locals could not find a scientific explanation for this phenomenon. Many researchers have spent years studying this structure, even X-raying the walls, but have no explanation for the roots of the trees. In 2003, a geophysical report was presented at the 4th Symposium of Archaeometry in Greece. The results of this investigation proved that the roots followed the gaps existing inside the stone wall of the chapel creating repulsion stresses between the stones and thus reaching the ground.

The entire building is under considerable pressure due to the large load of the trees and it is a miracle that after hundreds of years, the chapel survives with no damage to the structure or to the trees. A spring comes out from underneath the chapel and irrigates the trees." (excerpted from: http://orthodoxwiki.org/Theodora_of_Vasta; for the geophysical report cited, see: http://www.archaeometry.gr/oldv/symposium2003/pages_en/abstracts/papers/geophysical/geo8.htm) 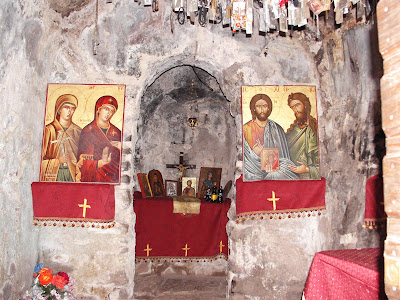 A picture of the interior of the Church of St. Theodora. In the top right are many symbols of healings that have occured, and which people have brought out of gratitude (taken from: http://users.hol.gr/~spyrosy/vasta/)
Note that St. Theodora has not been officially recognized as a Saint, but she is widely honored by the Church and its faithful, especially due to the many miracles that have occurred through her prayers. May St. Theodora intercede for all of us and help us! 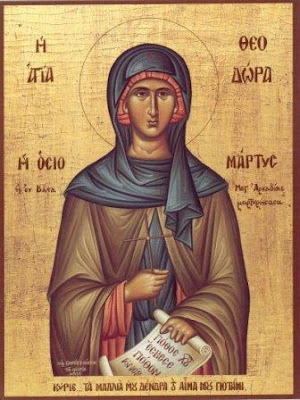 Another icon of St. Theodora the Righteous Martyr of Vasta (taken from: http://www.photosled.com/data/2405/0911_Teodora_Bastas.jpg)


Apolytikion of St. Theodora of Vasta in the Fourth Tone.
As a most-precious gift, and rational offering, was proved to be, to Christ the God over all, your blood O all-pure one. Therefore Righteous Martyr, Theodora entreat for the remission of sins, salvation of souls, grant to those who honor your divine struggles.
(amateur translation of the above hymn, taken from: http://orthodox-answers.blogspot.com/2007/08/blog-post_23.html)

Through the prayers of our Holy Fathers, Lord Jesus Christ our God, have mercy on us and save us! Amen!
Posted by Agioi_Anargyroi at 6:42 AM

At the page
www.Agia_Theodora.gr
can you find many photos from chapel of Saint Theodoras.

I would like to make a respectful suggestion. I really like this blog but the black background make it very difficult for me to read.
I wish the author would consider
trying another color for the background. Please forgive
David

Thank you for the observation; I'm always looking to improve things.

I will looking into changing the theme to something easier to read.

I didn't know about this martyr, thank you very much for sharing this knowledge!
Holy Martyr, pray for us.

Can someone tell me what the scroll in her hands says?

I thought she was canonised by the Greek Orthodox Church?

I'm not aware of an official canonization by the Ecumenical Patriarchate, but of course this does not stop the local veneration of various saints. Sainthood intact begins as the testimony and witness to the holiness and miracles of a saint from the body of the faithful, and eventually, the Church officially acknowledges and certifies this with canonization for some at some times.