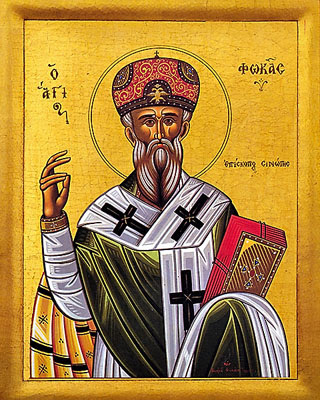 St. Phocas the Hieromartyr, Bishop of Sinope - Commemorated September 22nd (http://uncutmountainsupply.com/proddetail.asp?prod=1PH15)
Excerpt from St. John Chrysostom's Homily: "On St. Phocas"
Note: This is taken from a homily of St. John delivered on the feast of the transferral of the relics of St. Phocas to Constantinople. The translation is taken from "The Cult of the Saints", which includes translations of multiple homilies of the Saint on the Holy Martyrs. Though he is referring specifically to St. Phocas (purportedly the Hieromartyr, Bishop of Sinope), he is also describing the grace of all of the Martyrs of Christ, and the sanctification we receive by honoring them.


Let no one keep away from this holy festival. Let no virgin remain at home, let no married woman stick to the house. Let's empty the city, and set course for the martyr's tomb. After all, the imperial couple, too, are joining with us in the festivities. What excuse, then, does the private person have, when the imperial couple are quitting the palace and taking a seat at the martyr's tomb? For the nature of the martyr's power is such that it catches in its net not just private persons, but those who wear diadems. This [power is] a source of shame for the Greeks, this [power is] the censure of their error, this [power is] the total annihilation of demons. This [power is] our nobility, and the Church's crown. I celebrate with martyrs and instead of at [the sight of] meadows skip at the sight of their trophy, because instead of springs [of water] they poured forth blood. Their bones were consumed and yet their memory becomes fresher with every day. My point is that just as the sun cannot in any way be extinguished, so too the martyrs' memory. For Christ himself revealed: “The heaven and the earth will pass away, but my words will not pass away” (Mt 24.35). But let's put off our praises of the martyr until the appropriate moment. For truly what's been said is enough for the benefit of those who ought to assemble and make the day of the festival renowned. For what I said yesterday, I say again today, too, namely that while no glory will attach to the martyr from the attendance of large numbers, the blessing to you from being in the martyr's presence will be substantial. For just as the person who looks towards the sun doesn't make that star more brilliant, but floods their own eyes with light; so, too, then, the person who honors a martyr doesn't make him more radiant, but draws from him the light's blessing.
(http://books.google.com/books?id=NId6lapCDGkC&pg=PA26&lpg=PA26&dq=homily+st.+John+Chrysostom+on+St.+Phocas&source=bl&ots=UZxwL1gEVt&sig=RMHnNrHX0yfm_fd68y7yOwUV36w&hl=en&ei=CAp7Tu28OdLdgQea8by6AQ&sa=X&oi=book_result&ct=result&resnum=5&ved=0CD0Q6AEwBA#)
Through the prayers of our Holy Fathers, Lord Jesus Christ our God, have mercy on us and save us! Amen!
Posted by Agioi_Anargyroi at 4:02 AM