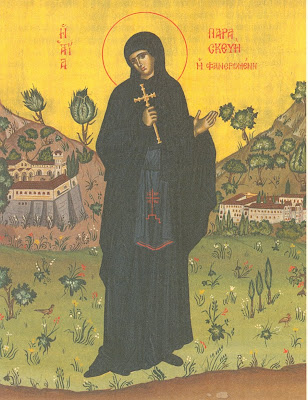 St. Paraskevi the Great Martyr of Rome, "H Phaneromenh" ("The Revealed One") (http://3.bp.blogspot.com/-D5ODBnntO_s/TfzoRpIyIuI/AAAAAAAAHzg/W0Nxpcemtkk/s1600/%25CF%2583%25CE%25AC%25CF%2581%25CF%2589%25CF%2583%25CE%25B70011.jpg)
Miraculous appearance of St. Paraskevi to Elder Damaskenos (amateur translation)
Elder Damaskenos (+2001) (Spiritual Father of the Monastery of St. John the Forerunner, Megara)writes: “We have the Saints and all the heavenly world dancing with us and celebrating with us. The Saints, with their love, capture our minds, so to speak... Every instant they communicate with us, because they are found amidst the light of God, and they are no longer burdened by material things. Therefore, they closely follow us continuously, and when we call upon them, immediately they visit us and save us from from many temptations, and the nous rejoices...”

“You see that the Saints leap to come to us, and they want us to leap towards them, that we might be friends. We should return this visitation, for they desire it unbelievably. And what if the visible world is separated from the invisible? We must embrace the love of Christ, and make the leap!”

In the spring of 1988 (March 17th), the Elder, together with three sisters of the Monastery set off by car to work on the then dirt road, which had become impassible due to the rains. At the same time they would cut grass for the Monastery's cows. A short distance before the outdoor icon-stand of St. Paraskevi, at Stampola's field that was filled with wild flowers, they saw a woman wearing a kerchief, and dressed in dark clothing, moving slowly and bending down. She looked as if she were searching for something. She suddenly lifted her head and gazed intensely on the Elder, as if she wanted to talk with him. Her wholly-radiant and white face, along with her large almond eyes made a great impression on everyone. They passed her, however, without speaking with her.

After about an hour, as they were returning, they again met this strange sight, as she moved in the same way at the same place. The sisters were curious and asked:
“Papou*, what a strange thing! What is this woman doing by herself for so long here? She doesn't look like she is gathering plants.”
[*Papou: Greek word for "Grandfather", used as a term of endearment by the nuns towards their spiritual father]

At that instant, the woman turned around and gazed at the Elder with great emphasis, however, this time the sisters asked:
“Papou, stop so we can ask her who she is.”

But he, without stopping, repeated the words: “Thus the Saints appear—suddenly!”

Then the sisters thought that may this appearance was supernatural, and lamented that they didn't stop to investigate this unusual presence.

After a few days, at the end of the Divine Liturgy of Holy Saturday, one sister saw this same strange woman in church going to get antidoron from Papou. Astonished, she thought with joy: “Now you won't escape. I'll ask you who you are.” And she tried to catch her. As soon as she got closer, however, she disappeared before her eyes. She looked for her inside and outside of the Church, but she was gone! It was certain, furthermore, that her presence was supernatural.

Later Papou confessed that the sight of her and her appearance had filled his soul with a Divine exultation and informed him that she was St. Paraskevi. Besides this, for a while, he refused to accept this event as the Saint's appearance, as he feared being deluded. Because of this he tried to convince himself that this must have been an ordinary woman gathering plants. Of course, Papou would not accept all supernatural things as Divine, untested. For a long time, therefore, he repelled the spiritual sweetness that he sensed while remembering this meeting, thus protecting himself. However as he said, his soul did not find rest in this state of denial, and in the end, he lost peace in prayer. Thus he understood his mistake to not accept this blessing of God.

Later he confirmed to us: “As I stare into the eyes of St. Paraskevi, I greatly sense a river of Grace within me. I see that it raises me to a greater fire of Divine love. If I left my nous to work out the issue of the appearance of the Saint, I would have been wounded greatly! But I maintain that: “Who am I [to be worthy of such a vision]?” For there is always the danger of delusion.”

Later a spiritual child of his from Megara revealed: “I saw in a dream a woman who said: Go tell Damaskenos: Three times I appeared to you. What else do you want?”

“I am she whom your mother honors and fasts for since she was a small child. I Am Paraskevi!”


Through the prayers of our Holy Fathers, Lord Jesus Christ our God, have mercy on us and save us! Amen!
Posted by Agioi_Anargyroi at 7:56 PM