Excerpt from St. John Chrysostom's Homily on the Conception of St. John the Forerunner 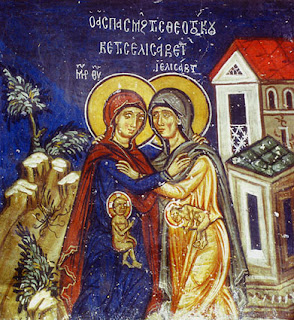 The Theotokos bearing Christ in her womb, greeting the Righteous Elizabeth, bearing the Precious Forerunner in her womb (http://pravicon.com/images/sv/s0772/s0772008.jpg)
Excerpt from St. John Chrysostom's Homily on the Conception of St. John the Forerunner (amateur translation)
None of the Lord’s laws disobey, but are all present to serve the divine command. He made an ordinance, therefore, and it shall not pass away. For by His word all things came into being, and instantly he is able to change them by the works of his word. He once said to the dry rock, “become a spring”, and a river of water came forth. He struck the rock, and poured forth water, and it became rivers. And the rock that was once dry and not quenching, became a spring of rivers and mother of waters. For God brings forth childbearing, not barrenness. The up till then barren rock was transformed into a lake, and the up till then barren Elizabeth was commanded to bear a child, and shown forth a mother, and showed her barrenness fruitful, and the old, burdened woman as a newly-wedded girl. For she who was heading towards the grave, now rejoiced in childbirth. For she whose body had wilted, God renewed her womb. And she whom youth abandoned, is divorced from old age. She who became neighbor to death, is called mother by a child. And this “mommy” transcends time, calling to motherly care, and the child she holds in her arms, she who once needed a cane due to her age. And the cry of the first-born child rings out, and the barren womb paradoxically gives birth, that the Virgin who gives birth beyond nature might be believed. How much greater and paradoxical are these new things! For a barren one and a Virgin have unexpectedly become mothers.
(Note: hosted by a non-Orthodox site: http://www.documentacatholicaomnia.eu/04z/z_0345-0407__Iohannes_Chrysostomus__In_oraculum_Zacharia__MGR.pdf.html)


Through the prayers of our Holy Fathers, Lord Jesus Christ our God, have mercy on us and save us! Amen!
Posted by Agioi_Anargyroi at 7:17 AM