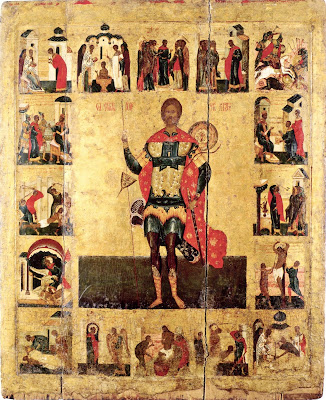 St. Niketas the Great Martyr, the Goth - Commemorated on September 15 (http://pravicon.com/images/sv/s1523/s1523006.jpg)
"The Holy Great Martyr Nicetas was a Goth (a Germanic tribe). He was born and lived on the banks of the Danube River, and suffered for Christ in the year 372. The Christian Faith was then already widely spread throughout the territory of the Goths. St Nicetas believed in Christ and accepted Baptism from the Gothic bishop Theophilus, a participant in the First Ecumenical Council. Pagan Goths began to oppose the spread of Christianity, which resulted in internecine strife.

After the victory of Fritigern, heading a Christian army and inflicting defeat on the pagan Athanaric, the Christian Faith began to spread increasingly among the Goths. The Arian bishop Ulfilas, the successor to Bishop Theophilus, created a Gothic alphabet and translated into the Gothic language many priestly books. St Nicetas worked intensely among his fellow Goths at spreading Christianity. By his personal example and inspired words he brought many pagans to the Christian Faith.

However, after his defeat Athanaric again contrived to gather his own forces, return to his own country and regain his former power. Since he remained a pagan, he continued to hate Christians and persecute them. 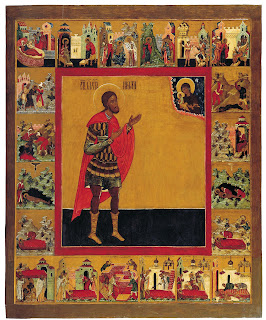 St. Niketas the Great Martyr (http://pravicon.com/images/sv/s1523/s1523007.jpg)
[When the Gothic prince Athenarik began to torture Christians, St. Nicetas stood before the prince and denounced him for his paganism and inhumanity. Subsequently harshly tortured, Nicetas confessed his faith in Christ even more strongly, and prayed to God with thanksgiving. His mind was unceasingly raised up to God, and on his breast under his robe he bore an icon of the Most-holy Theotokos with the Pre-eternal Christ Child standing and holding the Cross in His hands. St. Nicetas carried this icon because the Holy Theotokos had appeared to him and comforted him. (http://www.westsrbdio.org/prolog/prolog.htm)]

St Nicetas endured many tortures, and died after being thrown into a fire. His body remained unharmed by the fire and was illumined by a miraculous light. By night, a friend of the martyr, a Christian named Marianus, retrieved the body of St Nicetas,and buried it in Cilicia. Afterwards, it was transferred to Constantinople. Part of the relics of the Great Martyr Nicetas were later transferred to the monastery of Vysokie Dechani in Serbia. St Nicetas received an unfading crown of glory from Christ in the year 372.

We pray to St Nicetas for the preservation of children from birth defects."
(http://ocafs.oca.org/FeastSaintsViewer.asp?SID=4&ID=1&FSID=102615) 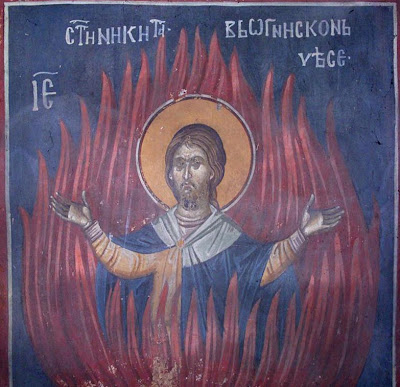 The Martyrdom of St. Niketas the Great Martyr (http://pravicon.com/images/sv/s1523/s1523003.jpg)
HYMN OF PRAISE
The Holy Martyr Nicetas
by St. Nikolai Velimirovitch
He is a true patriot who, among his own people,
Erects a true altar to the Living Lord.
Athenarik the Goth ruled by force,
And offered sacrifices to lifeless idols.
But holy Nicetas, the soldier of Christ God,
Was a preacher of eternal salvation.
He cast rays of the Eternal Light throughout the night,
Dispersing the idolatrous darkness that shrouded souls.
Holy Nicetas opposed the prince,
And his brave endurance amazed his people.
By the power of the Honorable Cross, he confounded the darkness
And filled all the people with the fear of God.
His blood was the rosy hue of the new dawn,
And his spirit was raised up to the heavenly courts.
In the terrible fire, Nicetas burned,
But, not even today, has he been consumed.
With the truth of Christ the Goths were baptized,
And they glorified Nicetas, their wonderful one.
O Saint Nicetas, voice of God's trumpet,
Courageous martyr, true patriot;
From the tents of the earth you have departed,
And you stand in the royal courts with the angels.
Pray for us, for the King listens to you,
That He grant our souls mercy.

You defeated error and triumphed in martyrdom, Nicetas, namesake of victory; for you conquered the ranks of the enemy and ended your contest by fire. Pray to Christ our God to grant us His great mercy.
Kontakion - Tone 2
You stood firm and defeated delusion and have received your martyr's crown, Nicetas, namesake of victory; you are rejoicing with the angels, together with them you are praying unceasingly to Christ God for us all.
(http://oca.org/FStropars.asp?SID=13&ID=102615) 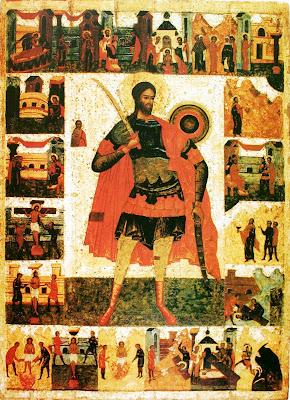 St. Niketas the Great Martyr (http://pravicon.com/images/sv/s1523/s1523008.jpg)
Through the prayers of our Holy Fathers, Lord Jesus Christ our God, have mercy on us and save us! Amen!
Posted by Agioi_Anargyroi at 9:45 AM

Thank you so much for this article.