On the Holy Cross, by St. John Chrysostom 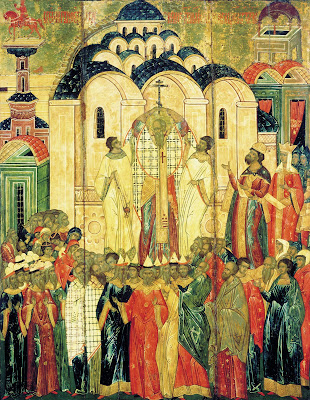 The Elevation of the Precious Cross of Christ (http://www.belygorod.ru/img2/Ikona/Used/232Vozdvijenie_krestaXVIGTG.jpg)
On the Holy Cross, attributed to St. John Chrysostom
Let us consider of what great blessings for us Christ's Cross has become the cause. For though the Lord's Cross sounds sad and bitter, it is in reality full of joy and radiance. For the Cross is the salvation of the Church; the Cross is the boast of those who hope in it; the Cross is reconciliation of enemies to God and conversion of sinners to Christ. For through the Cross we have been delivered from enmity, and through the Cross we have been joined in friendship to God. Through the Cross we have been freed from the tyranny of the devil, and through the Cross we have been delivered from death and destruction. 'When the Cross was not proclaimed, we were held fast by death; now the, Cross is proclaimed, and we have. come to despise death, as though it did not exist, while we have come to long for everlasting life. 'When the Cross was not proclaimed, we were strangers to paradise; but when the Cross appeared, at once a thief was found worthy of paradise. From such darkness the human race has crossed over to infinite light; from death it has been called to everlasting life, from corruption it has been renewed for incorruption. For the eyes of the heart are no longer covered by the darkness that comes through ignorance, but through the Cross they are flooded with the light of knowledge. The ears of the deaf are no longer shut by unbelief, for the deaf have heard the word of the Lord, and the blind have recovered their sight to see the glory of God. These are the gifts we are given through the Cross. What blessing has not been achieved for us through the Cross?
The Cross is proclaimed, and faith in God is confessed and truth prevails in the whole inhabited world. The Cross is proclaimed, and martyrs are revealed and confession of Christ prevails. The Cross is proclaimed, and the resurrection is revealed, life is made manifest, the kingdom of heaven is assured. The Cross has become the cause of all these things, and through the Cross we have been taught to sing. What then is more precious than the Cross? What more profitable for our souls? So let us not be ashamed to name the Cross, but let us confess it with total confidence.
Christ is hung upon the Cross, and the devil has become a corpse. Christ has been stretched on the Cross, and a standard of salvation has been given to the world. Christ has been nailed to the Cross, and every soul has been released from bonds. Christ has been fixed to the Cross, and all creation has been set free from the slavery of corruption. Christ has breathed his last on the Cross, and a new marvel has been shown to the world; for the sun's light is darkened. This what a prophetic saying cries out, "And it shall come to pass in that day, says the Lord, that the sun will set at midday, and the light will become dark in the daytime, and I will change all your feasts into grief and all your songs into laments" [Amos 8:9]. Do you see, beloved, how great a mystery the prophetic saying holds? For here the deeds of both are intimated: I mean of the Jews, who are under the law, and of the nations, who are outside the law, who both practice iniquity. For those who feast according to the law will grieve as they celebrate their feasts, and instead of songs, they make lamentations over Jerusalem. For Jerusalem will no longer hold solemn rites, and no feast will be celebrated in it. While pagan nations will mourn, making confession for their sins, and mourning is cause of blessedness. For scripture says, "Blessed are those who mourn, for they will be comforted" [Matthew 5:4]. They will mourn, then, over their empty feasts and lawless songs that they performed for the unclean demons. Take note then today how a pagan, repenting for the evil things he has done, laments and says with the prophet, "We have erred and strayed in our shame, and our sins have covered us, for we have been filled with our impiety. We have acknowledged the iniquities of our fathers". So then let us too lament and mourn for the evils that have been laid to our charge; let us cling to the Cross, placing all our hopes on the Cross, so that taught through the Cross, fixing our thought on heaven, being brought close to Christ our Saviour, we may be found worthy to be near God in the kingdom of heaven, in Christ our Lord himself, to whom be glory and might to the ages of ages. Amen.
Translation of text by permission of copyright © of the Very Rev. Archimandrite of the Oecumenical Throne Ephrem Lash. www.anastasis.org.uk. This appeared originally in Light of Christ, Newsletter of the Orthodox Church of St. John the Baptist and St. Anthony, London. (http://www.orthodox-christian-comment.co.uk/properofseason-exaltation_of_the_holy_cross.htm)


Through the prayers of our Holy Fathers, Lord Jesus Christ our God, have mercy on us and save us! Amen!
Posted by Agioi_Anargyroi at 3:57 AM