The Holy Prophet Jonah lived in the eighth century before the birth of Christ and was a successor of the Prophet Elisha.

[It is said that he was that son of the widow of Zarephath in Sidon whom the Prophet Elias had raised from the dead. (http://www.westsrbdio.org/prolog/prolog.htm)]

The Book of the Prophet Jonah contains prophecies about the judgments on the Israelite nation, the sufferings of the Savior, the downfall of Jerusalem, and the end of the world. Besides the prophecies, the Book of Jonah relates how he was sent to the Ninevites to preach repentance (Jon. 3: 3-10). 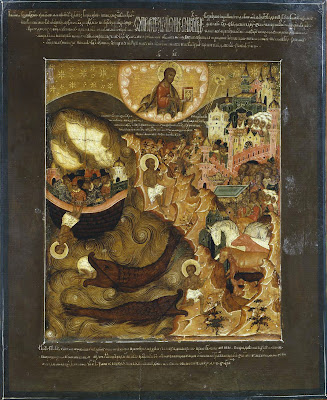 Icon depicting Jonah fleeing from the Lord on the ship, being thrown overboard, being disgorged by the sea beast, and preaching repentance to the people of Ninevah. Note that the full story is read annually in the Vespers of Holy Saturday (http://anastasis.org.uk/HWSat-V.htm) (http://pravicon.com/images/sv/s1018/s1018009.jpg)

Our Lord Jesus Christ, addressing the Scribes and the Pharisees who demanded a sign from Him, said that no sign would be given except for the sign of the Prophet Jonah, "As Jonah was in the belly of the whale three days and three nights, so also shall the Son of Man be in the heart of the earth three days and three nights (Mt. 12: 40). From these words the Lord shows clearly the symbolic meaning of the Book of the Prophet Jonah in relation to Christ's death on the Cross, descent into Hell, and the Resurrection.

Reproaching the lack of penitence and recalcitrance of the Jews, the Lord said, "The Ninevites shall rise in the judgment with this generation and will condemn it, because they repented at the preaching of Jonah; and one greater than Jonah is here" (Mt. 12: 41).
(http://ocafs.oca.org/FeastSaintsViewer.asp?SID=4&ID=1&FSID=102696)

The Holy Prophet Jonah
Nineveh! Nineveh resounds with sin,
And God sends Jonah to heal Nineveh.
Jonah does not want to, and flees from God!
Oh, where will you go, Jonah, to hide from the Most High?
Jonah sleeps; he sleeps and the tempest rises.
God moves slowly, but He will find you in time.
Hurled into the waves, swallowed by the whale,
``From whom did I flee?'' Jonah asks himself.
``I fled from Him, from Whom one cannot hide!''
God chastises Jonah and yet delivers him,
And, by His providence, glorifies him forever.
Jonah, you do not want to speak to the Ninevites,
But through your punishment you will prophesy the immortal Christ.
You do not want to by words? Then you must, by deeds,
Prophesy Christ and the death and resurrection of the body!
Your deeds, Jonah, will not fade away,
And Christ the Lord will speak of you to men,
That, through you, the mercy of the Living God might be revealed,
By which you will be saved, as well as Nineveh.
Through you, the power of repentance shall be revealed-
The power of repentance and God's forgiveness.
You pitied the gourd, and God pitied men.
Help us to repent, O God, and save us from condemnation.
(http://www.westsrbdio.org/prolog/prolog.htm) 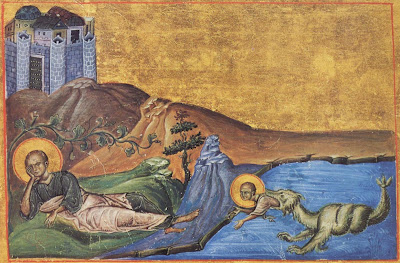 Prophet Jonah being spit up by the sea beast, and being protected by the shade of the plant.
"And God said to Jonas: Are you then so very grieved over the gourd [which withered in the sun]? And he said: I am very grieved, even to death. And the Lord said: You had pity for the gourd, for which you had suffered no evil, nor did you rear it; it came into being before night, and perished before night. And I, shall I not have pity for Nineve the great city..." (Fourth Reading of the Vespers of Holy Saturday (http://anastasis.org.uk/HWSat-V.htm)) (http://pravicon.com/images/sv/s1018/s1018003.jpg)

Troparion - Tone 2
The memory of your Prophet Jonah, we celebrate today, O Lord. By his prayers we entreat you: O Christ God, save our souls! 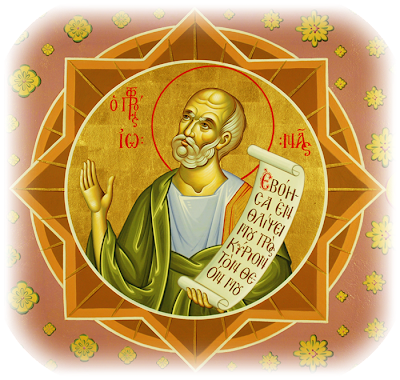 Through the prayers of our Holy Fathers, Lord Jesus Christ our God, have mercy on us and save us! Amen!
Posted by Agioi_Anargyroi at 8:26 AM