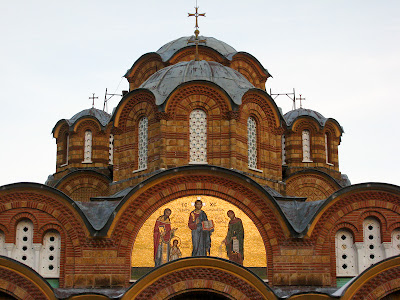 The Monastery of Sts. Raphael, Nicholas and Irene the Newly-revealed, Goumenissa (https://lh6.googleusercontent.com/-VFL-DDWG7NY/R88jB08fP7I/AAAAAAAAHSY/pyAK8B5QObQ/IMG_1527.jpg)
Sts. Raphael, Nicholas and Irene heal a modern case of acute leukemia (amateur translation)
P. Zoupides (Kallithea, Alexandroupolis) writes: At Pascha in 2003, our only child Joanna (then 4 years old), got sick with a high feaver and otitis. With two doses of strong antibiotics, her body's defenses fell. On May 23rd, she woke us up crying, doubled [in pain] on her bed. After countless tests, they sent us to the Hospital, and from there to Thessaloniki or Athens, because only there could they do a myelogram. On June 2nd we entered the Hematology-Oncology center of AHEPA. Terrible was the sight of so many children there! They drew countless blood and in the end, they did a myelogram. The next day, Director-Professor Fani Athanasiadou told us that our child had dual type acute lymphoblastic leukemia, of T, but primarily B cells, a rare presentation. She would have to be admitted, start chemotherapy, which she probably wouldn't have been able to take...

We were admitted. The very first day, our child told us:
“Daddy, I saw the Papouli [term of endearment for a clergyman].”

“St. Nicholas. He was wearing black clothes, and he told me, Daddy, that you should go to the Monastery to bring me a small icon of St. Raphael to put above my head, below the icon of Christouli [Christ], there...he is making me well.” At that point she raised her hands and pointed to the icon of Christ that was nailed to the wall above her head.

My God, what things were going through our minds! A unique experience: from sorrow to come joy, from agony, strength, from a tear, faith, and from pain, hope.

It is worth noting that these were words from a four-year-old child, who had never heard of Saints till that point. And furthermore, my mother and I had St. Nicholas [of Myra] as our sole protector.

We ran from excitement to the street and began to ask who was that Saint, and where is that Monastery nearby.

And oh, how great are the signs of God! In the room next door (no. 7) was a sick three-year-old blessed boy (like an angel) Vasilaki, whom the doctors had diagnosed with a tumor on his nose one day before, and who was beginning treatments.

His parents immediately explained that their aunt obviously knew of the monastery of St. Raphael in Griva, Goumenissa, and with great faith they told her:
“Don't let anyone bother the child until I go to the Monastery and bring back holy oil and holy water to cross him with.”

That is what happened. Their aunt went to the Monastery of Griva, entreated the Saints from her soul, and took a bottle of holy oil and holy water. When she reached the hospital, she crossed the child with holy oil and gave him holy water to drink. At the same time, she also read the supplication service to the Saints [Raphael, Nicholas and Irene].

The next morning they resumed their endless tests on the boy, and they all came back negative. The child was totally clear, there was no tumor anywhere. At the hour when the parents and aunt of the child in room 7 were rejoicing, at that instant, my mother was leaving room 6 and almost fell down, seeing them dance from their joy. They told her the miracle of the Saint to their boy, and she called me to hear with my own ears and to tell us to go to this monastery ourselves. The boy's father made a map of the path from Thessaloniki to Griva, and we said our goodbyes.

Without a second discussion, we left with my mother for the monastery. When we got there around 3:30PM, we saw a monk, to whom we explained our little girl's state. He took us to the small church where they have the relics of the Saints and began to read the Paraklesis. Until that moment, none of us could understand what exactly was going on, where and how we got there.

And soon the answer to the mystery was revealed. During the Paraklesis, we heard them commemorate Sts. Raphael, Nicholas and Irene. I turned to stare at my mother. I lifted up my eyes and gazed upon the icon of the three Saints, and began to read their names. Then I understood that: “the Papouli Nicholas” which my daughter mentioned was the Saint from St. Raphael's group, the Saint which none of us knew, though it is clear that he knew us, and sent his intercessions. We burst into tears. We who are so unworthy, were granted to experience such a miracle. We embraced and kissed the all-sacred relics of the Saints, crying, and as our tears fell, we entreated the Saints to help our child in these difficult hours which she was going through, in which we could do nothing but simply watch.

Then the monk gave us holy oil and holy water to cross our daughter with, and urged us to have three Divine Liturgies done in Joanna's name, to go to Holy Confession, and to take Holy Communion, if we could. And of course he mentioned that it would be good, if possible, to go venerate at the place of martyrdom of the Saints on the island of Mytilene.

My child was rescued from certain death by a miracle of the Saints (an extensive description and pictures of the child were recently sent to the monastery).
(http://www.orthodoxia-ellhnismos.gr/2011/09/blog-post_8081.html#more)


Through the prayers of our Holy Fathers, Lord Jesus Christ our God, have mercy on us and save us! Amen!
Posted by Agioi_Anargyroi at 5:34 AM

Would you be able to guide our family to get in contact with the monastery to help pray for the cure of my sister Victoria who also has Leukemia. At the time of relapse, Victoria had been in remission for 18 months and it had been 14 months since her stem cell/bone marrow transplant. Since she just completed chemo about two weeks ago, she has contracted the flu and pneumonia. My parents are members of the Saints Raphael, Nicholas and Irene Greek Orthodox Church in Florida. Please help us and pray for my sister's complete and absolute recover so she can live a long, healthy, happy and loving life with her entire family. Thank you. Dean Couluris - I can be reached at dcouluris@gmail.com and her husband at andrew.georgakopoulos@gmail.com.

May Christ have mercy on Victoria, through the intercessions of the Theotokos, and the great, wonderworking Sts. Raphael, Nicholas and Irene!

Hi,
I am a film and television student from Australia and am in the developmental stages of a documentary about the miracles of saint Raphael, Nicholas and Irene. I am currently searching for individuals who have been touched by their miracles to describe their experiences on camera and was wondering if there is any way I could get in contact with the people discussed in this post?
In making this documentary I hope to make known the wonders of these saints to the younger generation, inform those who may not be religious and reaffirm faith in those who are.
Thank you for your time,
Tiana