The Divine Liturgies of St. James Adelphotheos and St. Basil the Great 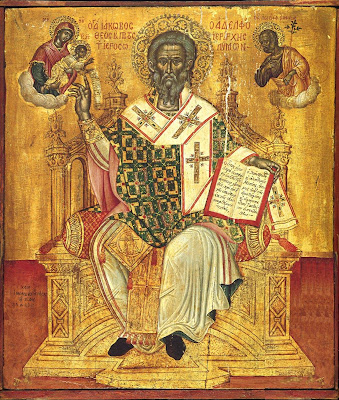 St. James (Iakovos) Adelphotheos, the First Bishop of Jerusalem, depicted enthroned with Christ, the Theotokos, and his father, St. Joseph the Betrothed (alterred from: http://pravicon.com/images/sv/s0848/s0848011.jpg)
Note: In this selection, we see both the historical and spiritual importance of the Divine Liturgy of St. James (Iakovos) Adelphotheos, and the Divine Illumination that underlined the composition of the Divine Liturgy of St. Basil the Great. It is important to keep in mind that this in no way demeans the ancient and compunctionate Liturgy of St. James, which many Orthodox Churches still celebrate to this day (on St. James' Feast on October 23, or on other days). In addition, it is important to know that this does not justify just any change to the holy services of the Orthodox Church. St. Basil, one of the greatest Fathers of the Church, had the wisdom, discernment, and divine guidance to know when alterations were necessary to the Divine Liturgy. To this day, there seem to be no grounds for further alterations to the timeless, heavenly and soul-saving Divine Liturgies of the Orthodox Church.

After the Resurrection of Christ, St. James, the son of Joseph the Betrothed, the so-called "Adelphotheos" ["Brother of God"], became the Archpriest of the faithful of Jerusalem, and wrote in Hebrew certain prayers and entreaties to God to be said by the Priests when they would celebrate the Divine Mystagogy, which was granted by our Lord Jesus Christ to the Apostles on that night that he was betrayed.

Those prayers and the service of the Divine Liturgy were translated into Greek, as they are found today. St. Clement, the disciple of the Holy Apostle Peter whom he appointed Pope of Rome, advised all Christians to celebrate the Divine Mystagogy in this manner.

In this way, therefore, the Christians celebrated the Divine Liturgy for 350 years. However, those prayers and the Service was very long. The Priests neglected the service and did not liturgize, while the Christians during the Liturgy grew tired and yawned, as they wanted to go to their homes and to their jobs.


Thus St. Basil the Great saw this situation, and hoped in some way to ease the great burdens of the Christians, while also trying to find time to expand his teaching. He asked God to show him a sign that he might know if it was His will to complete his task [i.e. to write an shorter Divine Liturgy].

Thus he prayed for many days with fasting and tears.

One night, he saw a wondrous and paradoxical vision, which he was made worthy of due to his purity and holiness, and which I am afraid to relate, O blessed Christians, being myself unworthy and full of all uncleanliness.

Therefore in this vision, St. Basil saw Christ with the Apostles (O Your condescension, O Lord Who loves mankind!) and according to the archpriestly order He celebrated the Divine Mystagogy with them. However, the Lord did not say the prayers as written in the Liturgy of the Brother of God James, but He shortened them in the manner in which St. Basil later composed his Divine Liturgy.

The Saint, having seen this vision, thanked God Who hearkened to his prayer, and he wrote the Divine Liturgy in a more condensed fasion, as it is found today.
(http://athos.forumup.gr/about2205-athos.html) 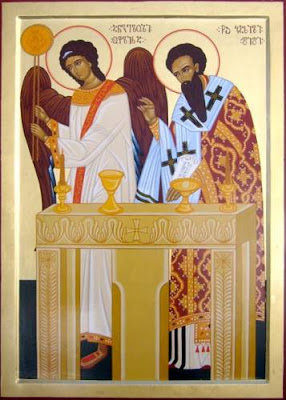 St. Basil the Great, celebrating the Divine Liturgy (http://pravicon.com/images/sv/s0384/s0384019.jpg)
Through the prayers of our Holy Fathers, Lord Jesus Christ our God, have mercy on us and save us! Amen!
Posted by Agioi_Anargyroi at 10:58 AM