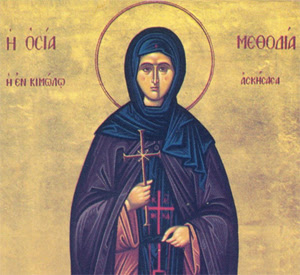 Born by pious parents on November 10th 1861 at Kimolos, she was the third child from the eight in her family. She was baptized Irene and from a very young age she stood out by her piety, modesty and love towards the Church.

Within the pious environment of her island and a family devoted to Christ, as she grew up so did her faith and religious fervency. She longed and waited for the proper time to devote herself completely to God and the Church.

However, since she was at an age “suitable for marriage” her parents decided to marry her; she submitted to their will and married a seaman from Chios.

Some time after the marriage the husband of the young woman shipwrecked and drowned at the shores of Asia Minor and then Irene felt that this was the time of divine calling for her.

When she confessed her wish to the priest who was her spiritual advisor, he encouraged her in realization her aim. After proper preparation she was ordained a nun, by the then archbishop of Siros Methodios and took the name Methodia. This event filled Methodia with infinite joy since her deepest wish was fulfilled. From then on she passed her life following faithfully and with great dedication the rules of monasticism, staying in her solitary cell, at “Stiadi”, at the uninhabited Inner Castle of Kimolos, next to the Sacred Church of the Birth of the Lord, which is dated from 1592.

This solitary cell was a true “confinement” where Methodia led an ascetic life with deep faith and enthusiastic perseverance and in spite of the fact that she didn’t live in a monastery she kept the monastic rules diligently and religiously. Her faith and prayers, fasting, vigil, study and her charity transformed her small cell into a holy place which was literally and metaphorically sweet-scented.

From the site of her confinement Methodia seldom left, only to watch the [Divine Liturgy] and receive Holy Communion or when it was great need and she wanted to assist someone who was in need. Her confinement was absolute during the period of the Lent and then she accepted to listen and give advice to women who were in great need and with whom she communicated through a small window, the only one in her cell, without opening her door. However, the rest of the time her cell was a true sacred school not only for the women of Kimolos but also for women from came from other islands having learned about the Osia [righteous monastic woman] in order to benefit spiritually from her teaching, to find relief from the sufferings of life and to draw from her inexhaustible source of faith, courage and will, love, perseverance and heart. She had dedicated students who transferred to their families the “dew and the medicament” which sprung from the sacred site and we can argue, with no hint of exaggeration that she influenced the life of all her compatriots.

Strict fasting, vigilance, prayer, tears, study, humility, charity enabled Methodia to become a “healer through Christ” receiving the grace to perform miracles. Miracles that are testified by her compatriots but also miracles that took place and continue to take place even today to those who invoke her help with clear heart and faith.

At an age of 47 and after a brief illness the “Christ Bearing” Osia Methodia passed away on October 5th 1908, while it was generally believed by her compatriots that God placed her amongst His Saints. In their mind she was a Saint and that was obvious in the fact that on August 15th 1946 they composed and signed a confession by which they recognized Osia as “patron saint and guardian of the island and great benefactor of them all”. 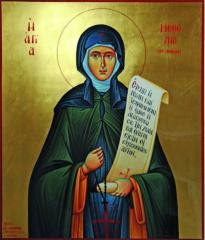 In 1962 in the place of her ruined cell a small church was built, honored under the name of Virgin the Merciful and Osia Methodia. They transferred her holy remains from the church of Agios Spiridonas, where they were kept since then, and placed in a crypt within the church. On October 5th 1991, a day of the event for her official declaration as a Saint, her remains were transferred again to the Sacred Church of Panagia Odigitria and they are still kept there, at the holy pilgrimage to every faithful Christian.

They called her an unsleeping vigil candle, the pride and guardian of Kimolos, inspired by God and valuable vessel of God-send virtues, luminescent lamp and brilliant glory of Cyclades. Innumerable are the epithets with which the admiration of the pious Christians adorned the humble peasant girl who felt the Lord’s calling from a very early age and responded with all the might of her soul. In the last two centuries the Cyclades gave four holy figures to our Church: Osios Nikodemos Agioritis from Naxos, Osios Arsenios from Paros, Osia Pelagia from Tinos and Osia Methodia in the 20th century from Kimolos. Her official sanctification took place by the Ecumenical Patriarchate with the Act 499 on July 17th 1991. 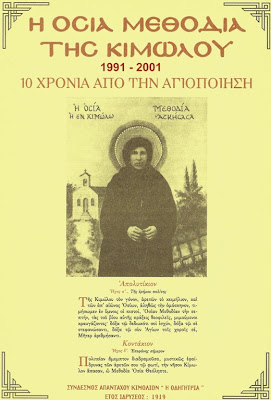 From a letter of Saint Methodia of Kimolos to her sister Anna.
"So, Anna, I pray that you not worry, because this world is like a dream. Do not say that you are tired of life, because it is a great sin, my child. I always pray to God to keep you in good health so that you may work, and that His grace might illumine you to do what is good, just as, my Anna, almighty God also illumined me, a sinner, and did not turn away from me in aversion.

When I was a girl, Anna, I used to say in my mind that God would help me fare well, because I felt my conscience pure, not knowing the judgments of God, which are an abyss. But now, when His grace has illumined me, I hate the corruptible things of this world and its pleasures, and follow my Creator, for I was like the prodigal son. Have you seen, Anna, what God says in the holy Book of the Gospels? He says that whoever follows Him will not be allowed by Him ever to become unhappy, but will receive His grace abundanty. As I see things today in my case, Anna, especially now that I am living in confinement, it is best to have steadfastness, patience, love and humility. Without humility no man is saved, no matter how many good deeds he performs. Humility leads one to salvation."
(http://www.groca.org/?p=2054)

For a press-release written by the late Fr. Cavarnos on the occation of the Saint's canonization, see: http://www.johnsanidopoulos.com/2009/10/saint-methodia-of-kimolos-and-her.html. See Fr. Cavarnos' biography of the Saint: "St. Methodia of Kimolos: Remarkable ascetic, teacher of virtue, counselor, comforter, and healer (1865-1908)" for her full life.﻿ 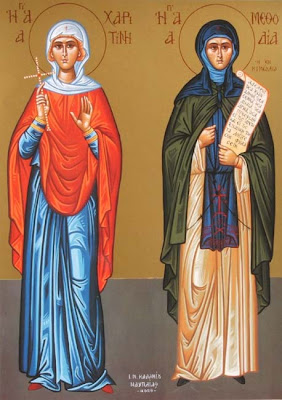 Apolytikion in the First Tone
Let us faithful honor with hymns the venerable Saint Methodia, the offspring of Kimolos, the jewel of virtue, and truly the peer of the holy Ascetics from the earliest times, imitating the deeds of her life beloved by God, crying out: glory to Him Who gave thee power, glory to Him Who crowned thee, glory to Him Who hath numbered thee, O holy Mother, in the choir of the Saints.
(http://www.johnsanidopoulos.com/2009/10/saint-methodia-of-kimolos-and-her.html)

Through the prayers of our Holy Fathers, Lord Jesus Christ our God, have mercy on us and save us! Amen!
Posted by Agioi_Anargyroi at 4:52 PM