The Relationship between Sts. Gerasimos and Makarios Notaras 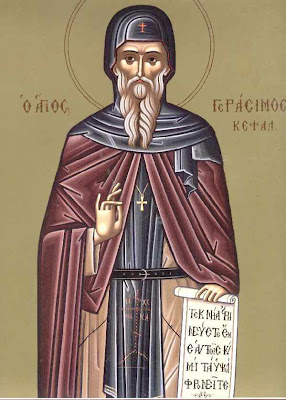 The Relationship between Sts. Gerasimos and Makarios Notaras (amateur translation)
After the arbitrary and anti-canonical dis-enthronement of St. Makarios from his see of Corinth, he continued his preaching and missionary work on different islands of [Greece].

His first stop in 1771 was Zakynthos, but his love and reverence towards his relative, St. Gerasimos Notaras (1509 – 1579), led him to Cephalonia to venerate the grace-flowing and incorrupt holy relic of St. Gerasimos, offering thus his pious respect to the Saint, whom he kept as a radiant example of the life according to Christ.

The arrival and stay on Cephalonia of the God-bearing and well-known Bishop of Corinth, St. Makarios, was accompanied by wondrous signs and occurrences, which revealed in the finest way the living presence of God and His Saints…

The miracle had been recorded in the oral tradition of the monastery, and till this day, the nuns mention the following: St. Makarios, having venerated the holy relic of St. Gerasimos, wanted to remain by himself before the reliquary after the setting of the sun. This, however, was forbidden according to the typikon of the monastery. The strong persistence of St. Makarios provoked the curiosity of the nuns, who decided to make an exception to allow the Saint to remain in front of the holy relic. Then, a few nuns hid in the corner to see what the Saint would do. In this way they became witnesses of an astonishing miracle: while St. Makarios knelt before the reliquary, the reliquary opened and St. Gerasimos arose. The two Saints embraced each other, and having spoken together, St. Gerasimos the wonderworker, the incorrupt in body and living in spirit, entered once again into the reliquary. 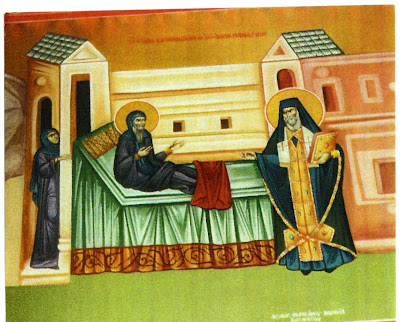 The contemporary sisterhood of the monastery of St. Gerasimos decided, out of reverence to St. Makarios and to make better known the miracle, to paint the icon of this occurrence in the beautiful and grand Holy Church of St. Gerasimos in the monastery at Omalon. It was painted by Mr. Elias Georgatos, who depicted the whole story in the magnificent holy church.

St. Makarios remained in the monastery of St. Gerasimos for a few months. In December 1771, he wrote the “Collection of Exhortations and Examples of our Righteous Fathers” «Συλλογή παραινέσεων και υποδειγμάτων των οσίων πατέρων ημών».

The Saint’s sacred presence on Cephalonia was significant, and to this day is preserved as a precious treasure a sanctified antimension with the signature of St. Makarios, in the Religious Museum of the Holy Monastery of St. Andrew Melapidias.

After his stay on Cephalonia, the Saint left again for Zakynthos, where he remained three years, after which he continued on to visit Hydra, Patmos, Leipsous, Samos, Ikaria, and Chios, where he reposed in righteousness April 17th, 1805.
(http://syndesmosklchi.blogspot.com/2011/04/blog-post_5214.html) 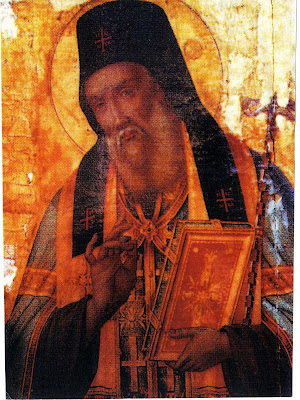 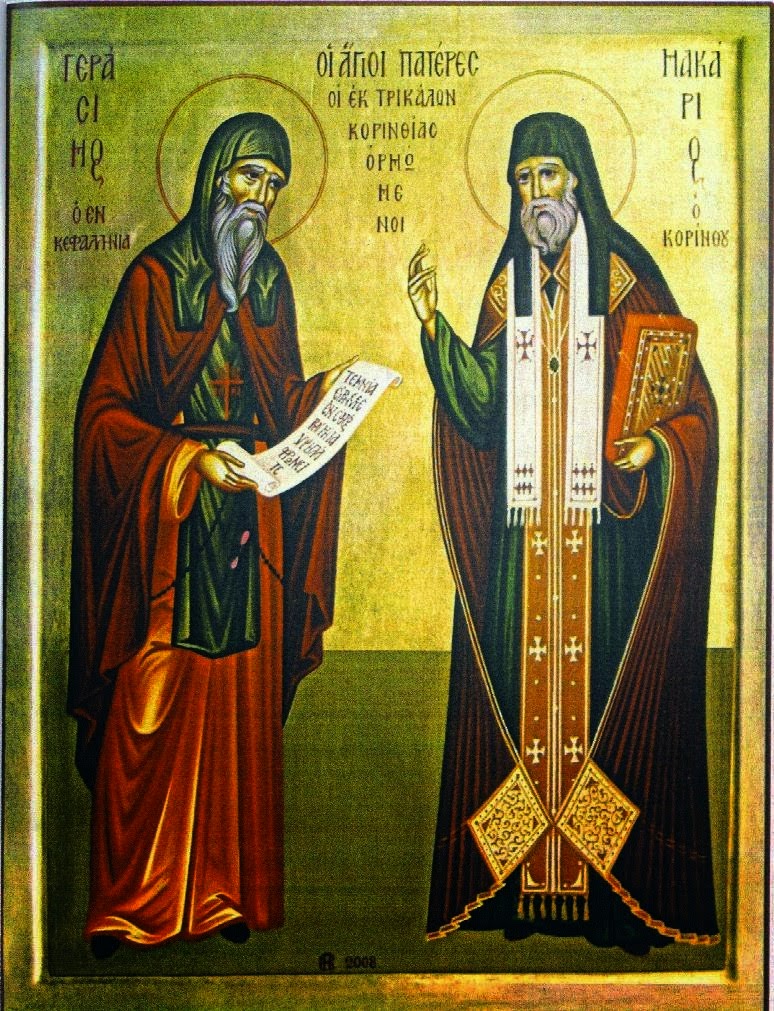 Sts. Gerasimos and Makarios Notaras, relatives according to the flesh and the spirit (source)


Through the prayers of our Holy Fathers, Lord Jesus Christ our God, have mercy on us and save us! Amen!
Posted by Agioi_Anargyroi at 2:52 PM