The Miracle of St. Paraskevi in 1442 on the Island of Chios 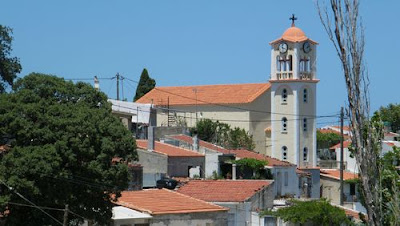 (http://2.bp.blogspot.com/_qpE5hNwi618/TLdRVo62RKI/AAAAAAAAKjo/BC7625YePv0/s1600/parakevi+halandra.jpg)
St. Athanasios of Paros records [in the New Chiakon Leimonarion] the following miracle of St. Paraskevi which took place in 1442 on the island of Chios which is annually commemorated on October 14th:

A hieromonk named Ambrose was celebrating Vespers in honor of Sts. Nazarius, Gervasius, Protasius and Celsus in the Church of St Paraskevi on October 14th in Palaiokastro in the village of Halandra. No one else was in the church. At the end of the service, rain suddenly began to pour down in torrents with a great roar as if the sea was being emptied onto the island, and this continued all night. Ambrose was unable to leave the church and return to his cell. Thinking that the island would be completely flooded by the storm, he began to pray to God to save his homeland and soothe His righteous anger. [St. Athanasios interprets this storm as a consequence of the aftermath of what happened at the Council of Ferrara-Florence.]

The pious hieromonk Ambrose prayed for hours to the point where he grew tired and sat down at a stasidi. While sitting he fell asleep. He had a dream at dawn and saw the church roofless, and, in the heights, a cloud of light within which stood the form of a beautiful and modest woman in prayer to God with hands raised. After her prayer, she said to the Ambrose who was struck with fear: "Ambrose, don't be afraid; I am the Righteous Martyr Paraskevi; your homeland is saved." Ambrose immediately awoke and noticed the rain stopped at once. With joy he began to pray the Matins service.

People from the lower village came up and informed Fr. Ambrose that the waters from the sea rose up to their part of the village up to the Church of Panagia Eleimonitria. It was at that time that Fr. Ambrose revealed to them his vision of St. Paraskevi and her promise that the island was saved. Taking her icon he proceeded to the flooded area of the island and lead a litany. When this was done the waters receded back to the sea. For this the people glorified God for the miracle worked through the Virgin Martyr Paraskevi.

From that time, the island of Chios has celebrated St. Paraskevi's feast day with great solemnity, primarily on her feast day on July 26th, but also on October 14th to celebrate her great miracle. Till this day her holy icon works miracles for the people of Chios.

St. Paraskevi the Great Martyr (http://2.bp.blogspot.com/_qpE5hNwi618/TLdQv4dhg4I/AAAAAAAAKjI/jXI_AE9nGwI/s1600/paraskevi+miracle+icon.jpg)
Selected hymns from the feast commemorating the miracle of St. Paraskevi on Chios (amateur translations below from the full Greek service of the feast here: http://voutsinasilias.blogspot.com/2009/10/14.html)
Doxastikon of the Stichera in the Second Tone
Glory to the Father and the Son and the Holy Spirit.
Rejoice, today, all of Chios, in the memory of the Righteous Martyr, and radiantly celebrate, for the island has found a most fervent protector in dangers. And though once the sea was raging, angered against the City [Constantinople], the Saint raised her martyrical hands in supplication, and paradoxically the island was saved. Therefore we too, the descendents of those saved, reverently commemorate the miracle, and with faith and fervor cry out to her, saying: O Paraskevi most wondrous, do not cease to ever intercede for us.
Aposticha in the Plagal of the Second Tone
Come, all of Chios, and gather spiritually to commemorate the sacred remembrance of the awesome miracle of the Righteous Martyr, which saved all of the city from drowning by the waves. By divine command, the sea, which was to destroy the sinners who angered God, obeyed its bounds, and returned to its original place.
Hail, O all-famed Paraskevi, we cry to you who saved Chios from the all-holy surge. Through your intercessions, you stopped the anger of the Lord of all, and were beheld in an all-radiant cloud with uplifted hands by the Righteous Ambrosios, who heard you, and thus banished all fear and chaos. And ever, out of need, we celebrate this yearly feast, and applaud your grace, O Martyr worthy of praise.
We ever thank you, O Champion Paraskevi, and annually chant and proclaim in your Holy Church, for you saved us from the terrible surge from the Lord because of lawlessness, and we pray to you, to ever look upon with compassion this gathering, being in the presence of God with the sacred Matrona. For you are ever Chios' support, and taking refuge in the two of you, let us hearken to the words of the Scriptures.
Doxastikon of the Aposticha in the First Tone
Glory to the Father and the Son and the Holy Spirit.
O most-praised Paraskevi, the boast of Martyrs, and the protector of our city paradoxically from its works, and ceaseless intercessor towards God. We, out of necessity, praise you and we thank you, for you had compassion upon us, who had sinned against the Master, and did not leave us to perish in the end. And we pray to you: do not cease to ever entreat Him, that we find mercy on the Day of Judgment.
Through the prayers of our Holy Fathers, Lord Jesus Christ our God, have mercy on us and save us! Amen!
Posted by Agioi_Anargyroi at 1:17 PM