The Holy Week Services of St. Demetrios the Myrrh-streamer 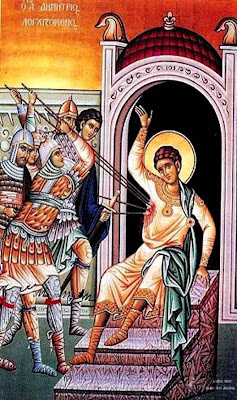 The Martyrdom of St. Demetrios the Great Martyr and Myrrh-streamer (http://users.hol.gr/~jimchr/index.files/image12411.jpg)

The Holy Week Services of St. Demetrios the Myrrh-streamer
The love and devotion towards St. Demetrios the Great Martyr and Myrrh-streamer from the Orthodox faithful of Thessaloniki is truly immense. Though to some it may seem hyperbolic, St. Demetrios has worked countless wonders both for the city of Thessaloniki, and for all the Orthodox faithful throughout the world. In praise of Christ Who strengthened him in his martyrdom, and in honor and thanksgiving to this great Wonderworker, various hymnographers have composed hymns beyond those of the standard Menaia in praise of St. Demetrios.

Many of these hymns comprise the so-called "Holy Week of St. Demetrios". This is a collection of pre-festal hymns from various sources in honor of the Saint, and are generally modelled after and grouped correspondingly to the days of Holy Week (i.e. the Passion and Resurrection of Christ). Thus, they begin on October 19th ("Palm Sunday") and proceed to the feast of St. Demetrios on October 26th ("Pascha"). Many of the hymns have been written by St. Symeon of Thessaloniki (+1429), so we can see how this is an old and established tradition of this local Orthodox Church.

The full services for the Holy Week of St. Demetrios (in Greek) are available online here: http://analogion.com/forum/showthread.php?t=14355. Below are amateur translations of a few hymns from the Holy Week of St. Demetrios. They are beautiful, compunctionate and theological works by two Fathers of our Church, in praise of such a great role model and servant of Christ, St. Demetrios. May he intercede for us all, and heal us of the passions of body and soul!

St. Demetrios the Great Martyr and Myrrh-streamer (http://pravicon.com/images/sv/s0626/s0626011.jpg)
Doxastikon of the Praises in the Plagal of the Second Tone
(of Palm Sunday of St. Demetrios)
By St. Symeon of Thessaloniki
Before the days of your passion, the champion being in prison, the holy Nestor approached him and said to him: “O glorious one, how will I be able to conquer the terrible Lyaios?” He encouraged him, saying: “Go to that stadium, and you will find me fighting with you, interceding for you to the Lord, and make the sign of the cross, and in the midst of the battle cry: O God of Demetrios help me! And you will break him and throw him down.
Kontakion in the Plagal of the Fourth Tone
(of Holy Monday of St. Demetrios)
As a second Jacob, you wrestled with your enemy, and as the chaste Joseph who ruled over the passions, we honor you, for you O martyr were not a slave to sin or to error, and you, O blessed one Demetrios, received grace for your struggle and an incorruptible crown.
Kontakion in the Second Tone
(of Holy Tuesday of St. Demetrios)
Your nous trampled upon the enemies, and all of their deceits you dissolved, and you were granted victory from above, O most-praised Martyrs, and cry out together: How good and pleasant it is to be numbered with Christ.
Oikos
In the heavens, O Christ, dwell Demetrios and Nestor, and they are arrayed by you in divine light. Hasten speedily to me, who walk in the darkness of ignorance, to heal the passions, O only Immortal One, and grant me the garment of incorruption, that being arrayed in white, I might praise their light-bearing feast, and cry to You, O Lord: How good and pleasant it is to be numbered with Christ.

Kontakion in the Fourth Tone
(for the Holy Wednesday of St. Demetrios)
By St. Romanos the Melodist
Victory-bearing champion of the Immortal Master, mighty soldier of the King of Glory, O Demetrios, we the faithful praise you, saying: You have done well, to grant life everlasting.

Oikos
Which should I hymn, O martyr Demetrios? Your pre-struggles? Your struggles? Your post-struggles? All three I am compelled to praise. First, your pure way of life, second, your struggles, third, your many miracles which you have worked and continue to work from your tomb. Therefore, each of the faithful approaches your living relic in faith, reaping as from Paradise, life everlasting. 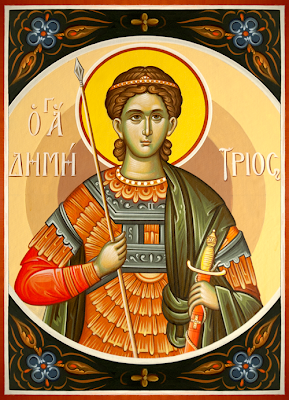 St. Demetrios the Great Martyr and Myrrh-streamer (http://1.bp.blogspot.com/_Ir0BxevvGe4/TNcU6Q16KHI/AAAAAAAAAzA/i7t0mZUVpug/s1600/ag-Dimitrios-2010.png)
Doxastikon of the Stichera in the Eight Tones
(of Holy Friday of St. Demetrios)
By John of Stavrakiou
First Tone
Our thrice-perfect protector, O greatly-glorified Demetrios, the abyss of martyrdoms, the unfading flower, the fragrant apple, the vine which brings the fruit of the various graces of the Spirit,
Second Tone
Your name is wondrous through all the earth, for the grandeur of your miracles has reached the heavens above.
Third Tone
I sing to you at this time with the instrument of David, for you imitated the God-man Word of the all-exalted Father, as His close servant.
Fourth Tone
For though you did not ascend the cross, your most clean body was pierced, and was shown forth as consumed.
Plagal of the First Tone
And now we praise your precious passion, for though formerly Eden was guarded by the fiery sword,
Plagal of the Second Tone
The side of the Savior, which was fearsomely pierced, made passage for the noble and godly-wise thief.
Grave Tone
Because of thus, your name is wondrous through all the earth, and the greatness of your glory is magnified from the ends of the world.
Plagal of the Fourth Tone
Therefore, protecting your mother land, you look upon the Thessalonians, and they are sheltered by you from all types of continuous trials.

Ode I of the Canon in the First Tone.
(of Holy Pascha of St. Demetrios)
It is the day of Resurrection...
by John Stavrakiou

It is the day of resurrection, the slaughter of Demetrios, for the error falls, and the Church of Christ is radiantly resurrected, and greets in joy, and cries out to God a joyous ode.
Let us all purify ourselves, and gather, arrayed in white, at the relics of Demetrios, which shine. And beholding them as we have heard, to the martyr let us say: Rejoice.
Truly the heavens decleare the glory of God, and the faithful glorify the work of His hands, the firmament hymns the martyr, the work of the hands of God, and because of this rejoices.
(http://analogion.com/forum/showthread.php?t=14355) 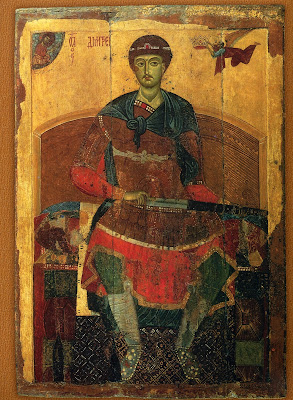 St. Demetrios the Great Martyr and Myrrh-streamer (http://pravicon.com/images/sv/s0626/s0626003.jpg)
Through the prayers of our Holy Fathers, Lord Jesus Christ our God, have mercy on us and save us! Amen!
Posted by Agioi_Anargyroi at 3:26 PM