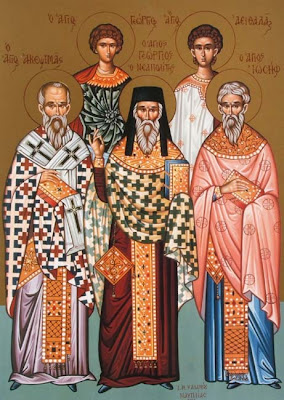 Icon of the Saints celebrated on November 3rd: (first row) Sts. Akepsimas, George of Neapolis, Joseph, (second row) George the Great Martyr (the dedication of his church) and Aethalas (taken from: http://christopherklitou.com/icon_3_nov_george_aethalas_acepsimus_george_of_neapolis_joseph.htm)

"Saint George, the new martyr of Christ, lived in Neapolis of Asia Minor (Nev-Sechir in Turkish) in the eighteenth century. He was a priest at the Church of the Dormition of the Theotokos and served his flock with righteousness and holiness as a true servant of the Most-high. Gifted with the qualities of love and meekness, brotherly love and forbearance, humble and spotless was his support and consolation of the Greek Christians who then lived under the yoke of the Turks. As an angel on earth the divine George willingly served his fellow men cultivating the divine gifts and pleasing to God.

In the year 1797 he was invited to the village Malakopi-located within six hours from Neapolis-to serve at some great feast and to bless their pious Christians, because their priest was ill, and or, in the opinion of others, was hiding from the fury of the Hagarenes [Turks]. The elder George now gladly accepted the invitation without considering the suffering and above all the risks.

Mounting his shabby donkey, he proceeded willing. He approached close to Malakopi, when suddenly at “Kobia Dere ", meaning “ravine”, he experienced a wild attack of Turkish shepherds, who angrily fell on him with an indescribable fury. They robbed him they stripped him naked, and in the end they gave him a martyric death, cutting off his precious head. His body, naked and bloodied, with his head they left in an adjacent canyon, but his soul flew close to its Lord to be numbered among the Righteous and the Hieromartyrs.

Four days passed without the Holy priest reaching Malakopi, but also not returning to Neapolis. Concerned citizens of Neapolis went in search of him. They found his holy body and his precious head and lamenting and weeping at his difficult death, a shepherd hastily buried him, fearing the fury of Hagarenes. Above his grave a stone bore the simple inscription: “The Priest George”.

Some time passed, until one night the holy hieromartyr appeared in a vision to a pious widow relating to her what happened and urging her to inform the Mayor to look to find the location in which he was buried. The woman did not give importance to it, but when after a few days the dream was repeated, she was fearful and did what the saint asked. Without delay the pious citizens of Neapolis led by a priest, called Neophytos, son also of priest Basilios, fellow priest? [συνεφημερίου] of the saint, hastened and excavated that shallow? [πρόχειρο] grave. Oh, the miracle! The relic of the Saint remained whole and incorrupt spreading heavenly fragrance and Grace! After they venerated it with reverence and awe, they placed in a wooden casket and carried it to the home of Fr. Neophytos, according to the desire of the Saint himself, and kept it in a cell.

There many came, locals and foreigners, to venerate the Saint and receive blessing from his venerable relic. Miracles began to occur. The sick and disabled were healed, childless couples bore children, spiritual illnesses disappeared, and further during drought the citizens of Neapolis fled to the Saint, that they might shortly see the blessed rain fall strongly. All confessed how miraculous St. George was shown to be!

In 1924, with the exchange of populations, the Greeks of Cappadocia left for free Greece, each taking with him whatever he considered most precious. The then priest of the Church of the Dormition of the Theotokos archimandrite Ignatios, perceiving his first responsibility to safely transfer the miraculous and incorrupt relic of St. George, brought it from the shore of Mersinis by steamer to Attica. During the journey they had very rough seas, but they were lulled with a miracle of the Saint. 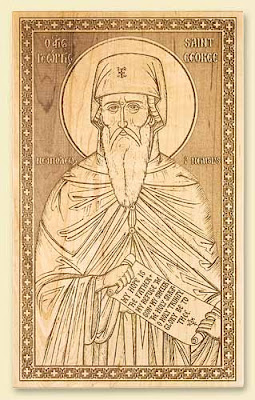 Another icon of St. George of Neapolis (taken from: http://www.holynativityconvent.com/images/Webimageslarge/Laser%20Large%20Images/St-George-of-Neapolis-web.jpg)

In Attica the sacred relic was handed over to citizens of Neapolis, who placed it with reverence in the Church of St. Eustathios in New Neapolis, Perissos. Since then countless are the miracles and the healings which St. George worked to those who call on his name with faith. 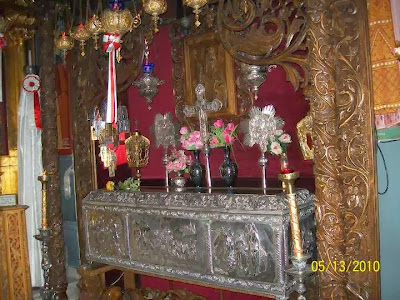 The Reliquary containing the Holy and Incorrupt Relic of St. George of Neapolis, treasured by the Church of St. Eustathios, Nea Neapolis, Perissos (Athens) (source) 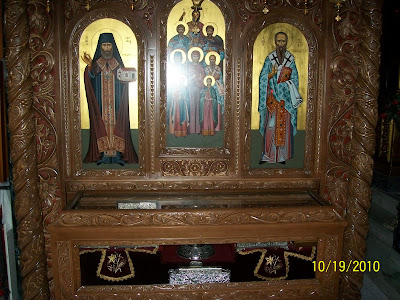 Other Holy Relics treasured in the Church of St. Eustathios, including the Skull of St. Gregory of Nyssa, and Holy Relics of Sts. Theodore Tyron, Theodore Stratelates, and St. George Karslides (source)

Since 2/11/1999, at request of the first Metropolitan Dionysios and noble concession of the Metropolitan of Trifilias and Olympias Stephen, a piece of the sacred relics of the Saint are treasured at the Holy Metropolis Church of St. George of Neapolis, as a permanent blessing of the people of the Metropolis bearing the name of Christ."
(amateur translation of text from here: http://www.imnst.gr/index.php?id=11)

For a video of the Church of St. Eusthathios, Perissos, Athens, along with icons and the Holy Relic of St. George of Neapolis, see: http://apantaortodoxias.blogspot.com/2009/11/3.html. 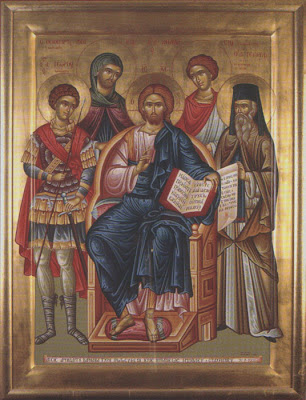 Apolytikion (for a Hieromartyr) in the Fourth Tone
As a sharer of the ways and a successor to the throne of the Apostles, O inspired of God, thou foundest discipline to be a means of ascent to divine vision. Wherefore, having rightly divided the word of truth, thou didst also contest for the Faith even unto blood, O Hieromartyr George. Intercede with Christ our God that our souls be saved.
(altered from: http://www.goarch.org/chapel/saints/68) 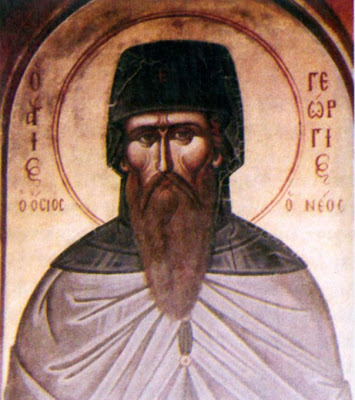 
Through the prayers of our Holy Fathers, Lord Jesus Christ our God, have mercy on us and save us! Amen!
Posted by Agioi_Anargyroi at 11:24 AM