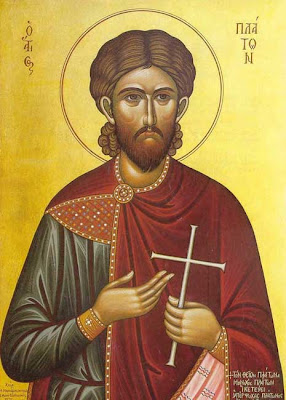 St. Plato the Great Martyr of Ancyra - Commemorated on November 18 (icon taken from: http://christopherklitou.com/icon_18_nov_platon.htm)
"The Holy Martyr Platon, brother of the holy Martyr Antiochus the Physician (July 16), was born at the city of Ancyra in Galatia. While still a youth he left home and went through the cities, preaching the Word of God to pagans, amazing his audience with the persuasiveness and beauty of his speech, and his profound knowledge of Greek learning.

Because of his preaching he was arrested and brought for trial to the temple of Zeus before the governor Agrippinus. At first, the judge attempted to persuade the saint to turn away from Christ by flattery. He assured the youth that he might be on a par of intellect with the greatest of the philosophers Plato, if only he worshipped also the pagan gods. To this St Platon answered, that the wisdom of the philosopher, although great, was but ephemeral and limited, whereas the true, eternal and unbounded wisdom comprised the Gospel teachings. Then the judge promised to give him his beautiful niece for his wife if he would deny Christ. He also threatened him with torture and death if he refused.
[When the governor counseled him to avoid death and save his life by worshiping the idols, Plato said: ``There are two deaths, the one temporal and the other eternal; so also are there two lives, one of short duration and the other without end.'' Then Agrippinus subjected him to even harsher tortures. Among other tortures, red-hot cannon balls were set on the saint's naked body; then they cut strips from his skin. ``Torture me more harshly,'' the martyr cried out to the torturers, ``so that your inhumanity and my endurance may be seen more clearly.'' (http://www.westsrbdio.org/prolog/prolog.htm)]
The patience of the governor was exhausted, and he gave orders to mercilessly beat the martyr, and then send him off to prison.
When they led St Platon off to prison, he turned to the people gathered about the temple, and he called on them not to forsake the Christian Faith. Seven days later they again led the Martyr Platon for trial before Agrippinus in the temple of Zeus, where they had the implements of torture already prepared: boiling cauldrons, red-hot iron and sharp hooks. The judge offered the martyr a choice: either to offer sacrifice to the pagan gods, or to feel the effects of these implements of torture on his body. Again the saint steadfastly refused to worship idols, and after his tortures they threw him in prison for eighteen more days without bread or water.
[When the guards were amazed that Plato was able to live in hunger for so long, he told them: ``You are satisfied by meat, but I, by holy prayers. Wine gladdens you, but Christ the True Vine gladdens me.'' (http://www.westsrbdio.org/prolog/prolog.htm)]
But seeing that this did not shake the martyr, they offered him his life and freedom if he would only say, "Great is the god Apollo." The martyr refused to deny Chirst or to sacrifice to the idols. Therefore, Agrippinus ordered the holy Martyr Platon to be beheaded." (taken from: http://ocafs.oca.org/FeastSaintsViewer.asp?SID=4&ID=1&FSID=103321) 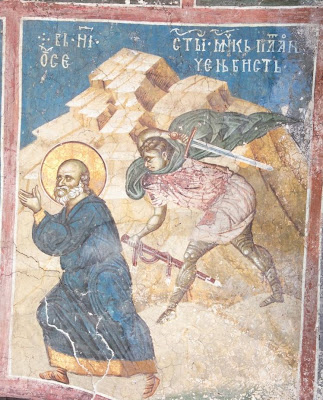 Fresco from Decani Monastery depicting the martyrdom of St. Plato the Great Martyr (taken from: http://www.srpskoblago.org/Archives/Decani/exhibits/Menologion/November/CX4K3532_l.html)
Apolytikion in the Fourth Tone
Thy Martyrs, O Lord, in their courageous contest for Thee received as the prize the crowns of incorruption and life from Thee, our immortal God. For since they possessed Thy strength, they cast down the tyrants and wholly destroyed the demons' strengthless presumption. O Christ God, by their prayers, save our souls, since Thou art merciful.


Απολυτίκιο. Ήχος α'. Χορός Αγγελικός.
Δυάς η ευκλεής, των κλεινών Αθλοφόρων, εδόξασε λαμπρώς, την Αγίαν Τριάδα, ο Πλάτων ο ένδοξος, Ρωμανός τε ο ένθεος, εναθλήσαντες, και τον εχθρόν καθελόντες, όθεν πάντοτε, υπέρ ημών δυσωπούσι, τον μόνον Φιλάνθρωπον.
(http://orthodox-world.pblogs.gr/2008/11/o-agios-megalomartyras-platwn-eortazei-stis-18-noembrioy.html)
Apolytikion of Sts. Plato and Romanos in the First Tone (Amateur translation from the above Greek)
The glorious Dyad, of noble Champions, radiantly glorified, the Holy Trinity, Plato the glorious, Romanos the divine, you struggled, deposing the enemy, therefore ever, entreat on behalf of us, to the only Lover-of-mankind.
Kontakion in the Third Tone
Thine all-holy memory doth cheer and gladden the whole world, calling all to come to thine august and ven'rable temple; wherein now, with jubilation we have all gathered, and with odes we hymn thy triumphs, O Martyr Plato, and with faith, we cry out to thee: Rescue thy people, O Saint, from barbarous foes.
(taken from: http://goarch.org/chapel/saints_view?contentid=296)
Through the prayers of our Holy Fathers, Lord Jesus Christ our God, have mercy on us and save us! Amen!
Posted by Agioi_Anargyroi at 9:08 AM