St. John the Merciful, Patriarch of Alexandria - Commemorated on November 12 (Icon courtesy of www.eikonografos.com used with permission)
"Saint John the Merciful, Patriarch of Alexandria, was born on Cyprus in the seventh century into the family of the illustrious dignitary Epiphanius. At the wish of his parents he entered into marriage and had children. When the wife and the children of the saint died, he became a monk. He was zealous in fasting and prayer, and had great love for those around him.

The saint worthily assumed his archpastoral service, concerning himself with the moral and dogmatic welfare of his flock. As patriarch he denounced every soul-destroying heresy, and drove out from Alexandria the Monophysite Phyllonos of Antioch.

He considered his chief task to be charitable and to give help all those in need. At the beginning of his patriarchal service he ordered his stewards to compile a list of all the poor and downtrodden in Alexandria, which turned out to be over seven thousand men. The saint ordered that all of these unfortunates be provided for each day out of the church's treasury.

Twice during the week, on Wednesdays and Fridays, he emerged from the doors of the patriarchal cathedral, and sitting on the church portico, he received everyone in need. He settled quarrels, helped the wronged, and distributed alms. Three times a week he visited the sick-houses, and rendered assistance to the suffering. It was during this period that the emperor Heraclius led a tremendous army against the Persian emperor Chosroes II. The Persians ravaged and burned Jerusalem, taking a multitude of captives. The holy Patriarch John gave a large portion of the church treasury for their ransom.

The saint never refused suppliants. One day, when the saint was visiting the sick, he met a beggar and commanded that he be given six silver coins. The beggar changed his clothes, ran on ahead of the Patriarch, and again asked for alms. St John gave him six more silver coins. When, however, the beggar sought charity a third time, and the servants began to chase the fellow away, the Patriarch ordered that he be given twelve pieces of silver, saying, "Perhaps he is Christ putting me to the test." Twice the saint gave money to a merchant that had suffered shipwreck, and a third time gave him a ship belonging to the Patriarchate and filled with grain, with which the merchant had a successful journey and repaid his obligations.

St John the Merciful was known for his gentle attitude towards people. Once, the saint was compelled to excommunicate two clergymen for a certain time because of some offense. One of them repented, but the other fellow became angry with the Patriarch and fell into greater sins. The saint wanted to summon him and calm him with kind words, but it slipped his mind. When he was celebrating the Divine Liturgy, the saint was suddenly reminded by the words of the Gospel: if you bring your gift to the altar and remember that your brother has something against you, leave your gift before the altar ... first, be reconciled with your brother, and then come and offer your gift (Mt. 5:23-24). The saint came out of the altar, called the offending clergyman to him, and falling down on his knees before him in front of all the people he asked forgiveness. The cleric, filled with remorse, repented of his sin, corrected himself, and afterwards was found worthy to be ordained to the priesthood.

There was a time when a certain citizen insulted George, the Patriarch's nephew. George asked the saint to avenge the wrong. The saint promised to deal with the offender so that all of Alexandria would marvel at what he had done. This calmed George, and St John began to instruct him, speaking of the necessity for meekness and humility. Then he summoned the man who insulted George. When St John learned that the man lived in a house owned by the church, he declared that he would excuse him from paying rent for an entire year. Alexandria indeed was amazed by such a "revenge," and George learned from his uncle how to forgive offenses and to bear insults for God's sake.

St John, a strict ascetic and man of prayer, was always mindful of his soul, and of death. He ordered a coffin for himself, but told the craftsmen not to finish it. Instead, he would have them come each feastday and ask if it was time to finish the work.

St John was persuaded to accompany the governor Nicetas on a visit to the emperor in Constantinople. While on his way to visit the earthly king, he dreamed of a resplendent man who said to him, "The King of Kings summons you." He sailed to his native island of Cyprus, and died at Amanthos, the saint peacefully fell asleep in the Lord (616-620)."
(taken from: http://ocafs.oca.org/FeastSaintsViewer.asp?SID=4&ID=1&FSID=103286) 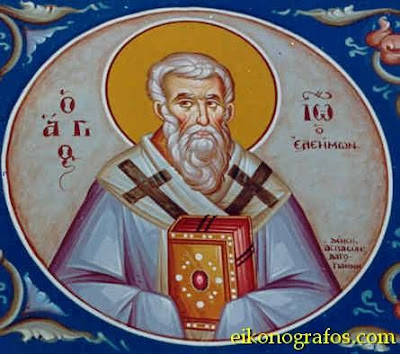 Icon of St. John the Merciful (Icon courtesy of www.eikonografos.com used with permission)
Before the Saint died, outside of what is today the town of Lemeso in Cyprus (which holds St. John as its Patron Saint) he wrote his will. It is short but very encompassing and moving (amateur translation of the Greek text from: http://www.pigizois.net/kiprioi_agioi/ioannis_o_eleimon.htm):

“I thank You, my Lord and God, for you made me worthy to give back the gifts which You gave me. I thank You, for you also heard my prayer and my work now that I am dying is none other than "a third coin”*, which I order to be given to my poor brothers. When by the grace of God I became bishop of Alexandria, I found in the treasury of my bishopric about 8,000 liters of gold. With the greatly gracious offerings of good-loving men, I established to gather [and distribute] an uncountable amount. All of which, which I knew, is a gift of Christ the king of all, which I returned with assiduity and care towards God, to whom they also belong. To Him I also now commend my soul.”
*(possibly a reference to the Parable of the Widow and the Two Mites?)

For more on St. John the Merciful, especially concerning the "Judgements of God" and the "Judgements of Men", see: http://www.johnsanidopoulos.com/2009/11/st-john-merciful-on-judgements-of-god.html. Another note for pilgrims traveling to Meteora in Greece, the Great Meteora Monastery preserves part of the Holy Skull of St. John the Merciful (http://www.kalampaka.com/gr/meteora/monasteries_meteoro.asp). May St. John intercede for all of us and help us! 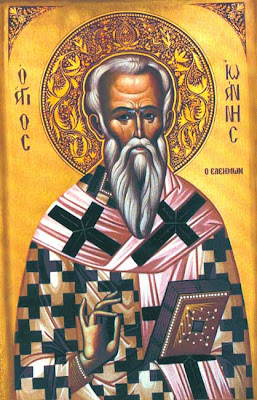 Icon of St. John the Merciful (taken from: http://christopherklitou.com/icon_12_nov_john_the_merciful.htm)
Apolytikion in the Plagal of the Fourth Tone
In patiently enduring, you obtained your reward, O venerable father. You persevered in your prayers without ceasing; and you loved the impoverished and you satisfied them. We entreat you, intercede with Christ God, O blessed John the Merciful, for the salvation of our souls.
Kontakion in the Second Tone
Thy riches and wealth didst thou disperse unto the poor; thou now hast received the Heavens' riches in return. For this cause, O all-wise John, we all honour thee with our songs of praise as we keep thy memorial, O namesake of almsgiving and of mercy.
(taken from: http://goarch.org/chapel/saints_view?contentid=288) 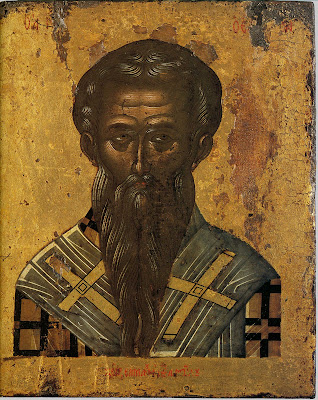 St. John the Merciful, Patriarch of Alexandria (http://www.ruicon.ru/arts-new/icons/1x1-dtl/grecheskaya/svt_ioann_milostivij/?page_19=840&p_f_11_temp_id=1&p_f_11_75=1&ref-cat=)
Through the prayers of our Holy Fathers, Lord Jesus Christ our God, have mercy on us and save us! Amen!
Posted by Agioi_Anargyroi at 7:51 AM