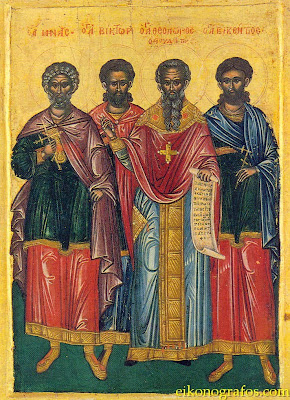 Icon of St. Menas the Great Martyr of Egypt (taken from: http://christopherklitou.com/icon_11_nov_menas_the_egyptian.htm)

The Holy Great-martyr Menas
"Menas was an Egyptian by birth and a soldier by profession. As a true Christian, he was not able to witness the abominable sacrificial offerings to the idols and left the army, the town, the people and everything else, and went to a deserted mountain, for it was easier for him to live among the wild beasts than with pagans. One day Menas clairvoyantly discerned a pagan celebration in the town of Cotyaeus. He descended into the town and openly declared his faith in Christ the Living God. He denounced idolatry and paganism as falsehood and darkness. Pyrrhus, eparch of that town, asked Menas who he was and where he was from. The saint replied: ``My fatherland is Egypt, my name is Menas. I was an officer, but witnessing the worship of idols, I renounced your honors. I now come before you all to proclaim my Christ as the true God, that He may proclaim me as His servant in the Heavenly Kingdom.'' Hearing this, Pyrrhus subjected St. Menas to severe tortures. 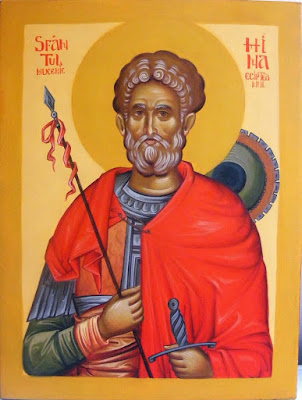 They flogged him, scraped him with iron claws, burned him with torches, and tortured him by various other means, and finally beheaded him with the sword. They threw his body into a fire so that Christians would not be able to retrieve it, but Christians recovered several parts of his body from the fire nevertheless. They reverently buried those remains, which were later transferred to Alexandria and buried there, where a church was built over them. St. Menas suffered in about the year 304 and went to the Kingdom of Christ. He was and remains a great miracle-worker, both on earth and in heaven. Whoever glorifies St. Menas and invokes his help with faith, receives his help. The saint has often appeared as a warrior on horseback, arriving to help the faithful or punish the unfaithful."
(http://www.westsrbdio.org/prolog/prolog.htm) 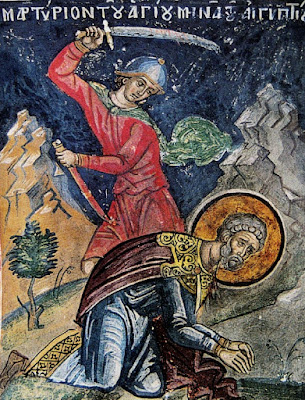 The Martyrdom of St. Menas the Great Martyr and Wonderworker (source)

For more on the Miracles and Shrine of St. Menas, see: http://www.johnsanidopoulos.com/2009/11/saint-menas-great-martyr-and-miracle.html. 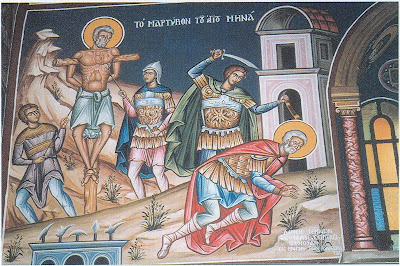 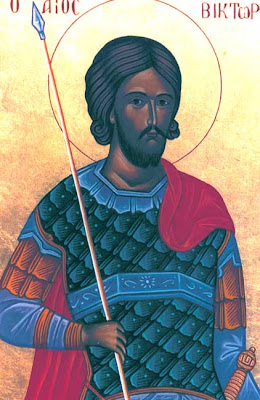 The Holy Martyr Victor
"The Holy Martyr Victor at Damascus was a soldier during the reign of the emperor Marcus Aurelius the Philosopher (161-180). When the emperor began a persecution against Christians, Victor refused to offer sacrifice to the pagan gods. Such obligatory sacrifices were a test of a soldier's loyalty to the gods, the emperor and the state. The saint was given over to torture, but he came through all the torments unharmed. By the power of prayer he was victorious over a sorcerer, who from that point gave up give sorcery and became a Christian.

Through St Victor's prayers, blind soldiers suddenly received their sight. Witnessing the miracle worked by the Lord through St Victor, Stephanida, the young Christian wife of one of the torturers, openly glorified Christ, for which she was condemned to a cruel death. She was tied to two palm trees bent to the ground, which when released, sprung back and tore her apart. She was fifteen years old. 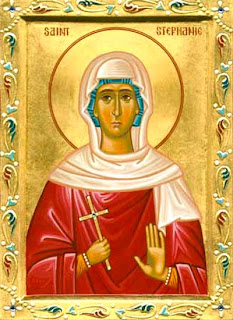 The torturer ordered that the holy Martyr Victor be beheaded. Hearing the commander's order, St Vincent told his executioners that they would all die in twelve days, and that the commander would be captured by the enemy in twenty-four days. As he foretold, so it came to pass.

The martyrs suffered in the second century at Damascus, where their venerable relics were buried."
(http://ocafs.oca.org/FeastSaintsViewer.asp?FSID=103278) 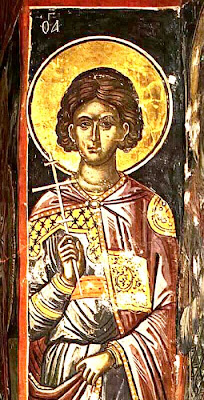 Icon of St. Vincent the Martyr of Spain(http://christopherklitou.com/icon_11_nov_vincent.htm)

The Holy Martyr Vincent (Vikentios)
"The Holy Martyr Vincent of Spain from his childhood was the disciple of a wise pastor Valerian, the bishop of the city of Augustopolis (now Saragossa, Spain). When he reached mature age, the virtuous, educated and eloquent Vincent was ordained deacon by Bishop Valerian. Since the bishop himself was not adept in speech, he gave a blessing to his deacon, an eloquent orator, to preach in church and among the people.

Diocletian (284-305) sent the governor Dacian to the city of Valencia, Spain with full authority to find and execute Christians. People denounced the wise bishop and his deacon to the governor, who arrested them. The soldiers, mounted on horses, dragged the Elder and his disciple behind them in chains from Augustopolis to Valencia, and there they cast them into prison beaten and tortured, giving them neither food nor water.

They subjected the bishop to the first interrogation. The Elder spoke quietly, but seemed tongue-tied and uncertain. Then St Vincent came forward and made the most eloquent speech of his life before the judges and assembled people. After he sent the bishop back to prison, the persecutor gave orders to torture the holy deacon.

The martyr underwent many torments: while nailed to a cross, he was whipped and burned with red-hot rods. When he was removed from the cross, he then himself joyfully climbed back upon it, saying that the executioners were lazy and had not fulfilled their master's orders. They became angry and tortured him again, until they were all exhausted.

After the tortures they threw the martyr back into prison. That night the astonished guard heard him singing Psalms, and saw an unearthly radiant light in the prison. The next morning the holy martyr was condemned to be burned on a gridiron. Christians took the saint's body and buried it with reverence. This occurred in the year 304."
(http://ocafs.oca.org/FeastSaintsViewer.asp?FSID=103279)


Icon of Sts. Menas, Victor and Vincent the Martyrs, who are commonly celebrated together (taken from: http://www.ecclesia.gr/greek/dioceses/xios/in_agiou_mina.html)

Apolytikion of the Martyrs in the Fourth Tone (Amateur translation of the above Greek)
Three-numbered regiment of the Soldiers of Christ, together let us honor as deposers of the enemy, Menas the ever-memorable, Victor the brave, and also Vincent, we praise these together along with the divine Stephanie. By their intercessions O Christ, have mercy on all. 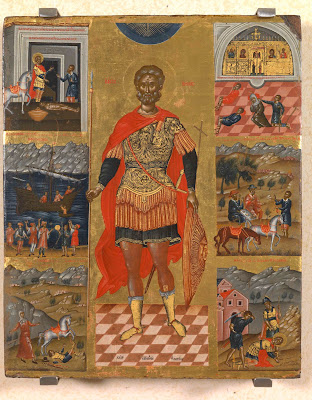 St. Menas the Great Martyr, with scenes from his life (http://194.177.217.107/gr/showpic.asp?picpath=34_8bit_PE-IC8-DS2-Q2&curtable=icons&currecord=34&vorder=1&vmode=first)
Apolytikion of St. Menas in the Plagal of the Fourth Tone
With great valour of soul, thou didst strive in martyrdom, and having fought the good fight, O divine Great Martyr Menas, thou from Heaven hast received the gift of miracles; for God hath shown thee to the world as a worker of great signs, and He made thee our protector and a swift help in afflictions and ever-vigilant defence from harm. 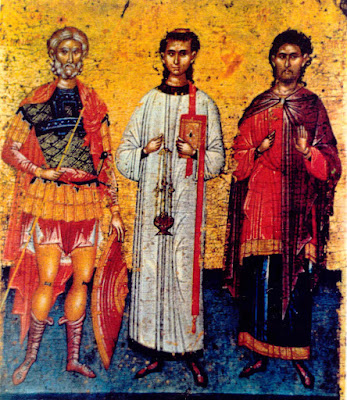 Sts. Menas, Victor and Vincent the Martyrs (source)
Kontakion of the Martyrs in the Plagal of the Fourth Tone
As godly-minded athletes and Martyrs who strove for piety, the Church doth honour and glorify this day the godly contests and travails of Menas the prizewinner, noble Victor, brave Vincent, and valiant Stephanie, and lovingly doth cry out and glorify Christ, the Friend of man.
(taken from: http://goarch.org/chapel/saints_view?contentid=285) 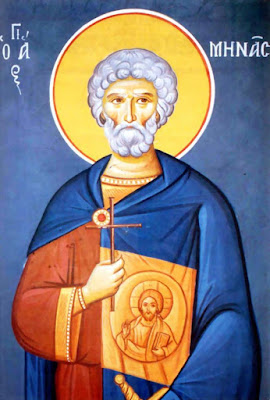 
Through the prayers of our Holy Fathers, Lord Jesus Christ our God, have mercy on us and save us! Amen!
Posted by Agioi_Anargyroi at 6:59 AM

Labels: Lives of the Saints, St. Menas the Great Martyr