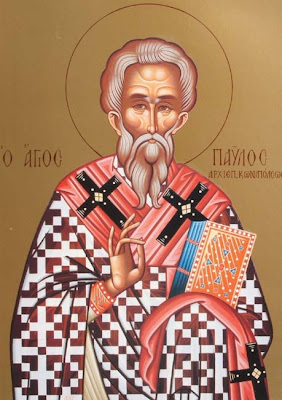 St. Paul the Confessor, Patriarch of Constantinople - Commemorated on November 6th (icon taken from: http://christopherklitou.com/icon_6_nov_paul_of_constantinople.htm)
"Saint Paul was from Thessalonica. He became the secretary of Alexander, Patriarch of Constantinople (see Aug. 30), a deacon, and then the successor of Saint Alexander in about 337. Because of his virtue, his eloquence in teaching, and his zeal for Orthodoxy, the Arians hated and feared him. When the Arian Emperor Constantius, who was in Antioch, learned of Paul's election, he exiled Paul and proclaimed the Arian Eusebius Patriarch. Saint Paul went to Rome, where he found Saint Athanasius the Great also in exile. Provided with letters by Pope Julius, Paul returned to Constantinople, and after the death of Eusebius in 342, ascended again his rightful throne; the Arians meanwhile elected Macedonius, because he rejected the Son's con-substantiality with the Father (and the divinity of the Holy Spirit besides). When Constantius, yet at Antioch, learned of Paul's return, he sent troops to Constantinople to drive Paul out. The Saint returned to Rome, where Saint Athanasius also was again in exile. Constans, Emperor of the West, Constantius' brother, but Orthodox, wrote to Constantius that if Athanasius and Paul were not allowed to return to their sees, he would come with troops to restore them him-self. So Paul again returned to his throne. After the death of Constans, however, Constantius had Paul deposed. Because of the love of the people for Saint Paul, Philip the Prefect, who was sent for him, was compelled to arrest him secretly to avoid a sedition. Paul was banished to Cucusus, on the borders of Cilicia and Armenia; a town through which his most illustrious successor, Saint John Chrysostom would also pass on his way to Comana in his last exile. In Cucusus, about the year 350, as Saint Paul was celebrating the Divine Liturgy in the little house where he was a prisoner, the Arians strangled him with his own omophorion, so much did they fear him even in exile. His holy relics were brought back to Constantinople with honour by the Emperor Theodosius the Great."
(taken from: http://goarch.org/chapel/saints_view?contentid=276) 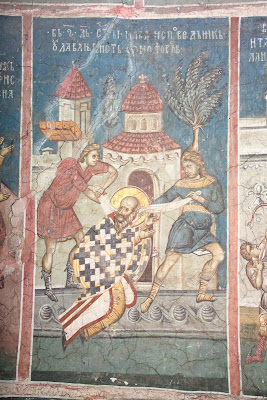 Fresco from Decani Monastery depicting the martyrdom of St. Paul the Confessor, Patriarch of Constantinople (taken from: http://www.srpskoblago.org/Archives/Decani/exhibits/Menologion/November/CX4K3477_l.html)
Apolytikion in the Third Tone
Thy confession of the one divine Faith showed thee to the Church to be a new Paul and a zealot among priests, O holy one. The righteous blood both of Abel and Zachary with thee doth cry out together unto the Lord. Righteous Father, intercede with Christ God in our behalf that His great mercy may be granted unto us.
Kontakion in the Second Tone
Thou shonest on earth, a star bright with celestial light, and now thou dost shine enlightenment on all the Church, in behalf of which thou didst struggle, laying down thine own life, O Paul, and like Abel and Zachary, thy blood doth cry out most clearly to the Lord.
(taken from: http://goarch.org/chapel/saints_view?contentid=276)
Through the prayers of our Holy Fathers, Lord Jesus Christ our God, have mercy on us and save us! Amen!
Posted by Agioi_Anargyroi at 11:01 AM