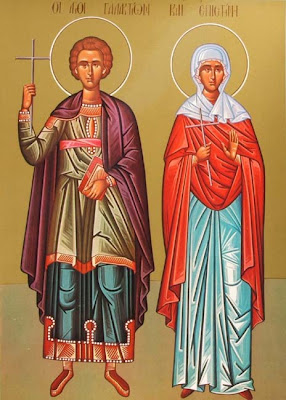 "They were born in the city of Edessa in Phoenicia, both of pagan parents. Galaction's mother was barren until she was baptised. After her baptism, she brought her husband also to the true Faith and baptised her son Galaction, bringing him up a Christian. When the time came for Galaction to marry, his devout mother Leucippe died, and his father betrothed him to a maiden called Episteme. Galaction did not wish to enter into marriage at all, and he quickly urged Episteme to be baptised and then to become a nun at the same time as he became a monk. Both went away to the mountain of Publion, Galaction to a men's monastery and Episteme to a women's, and each of them became a true light in the monastery. They were first in labours, in prayer, in humility and obedience, and first in love. They did not leave their monasteries, and neither saw the other until the time of their death. A fierce persecution arose, and they were both brought to trial. While they were mercilessly whipping Galaction, Episteme was weeping, and they then whipped her also. They cut off their hands and feet, and finally their heads. One Eutolius, a man who had been a servant of Episteme's parents and then a monk together with Galaction, took their bodies and buried them. He also wrote the Lives of these two wonderful martyrs for Christ, who suffered and received their heavenly crowns in 253."
(taken from: http://www.pomog.org/prologue/November/18.htm) 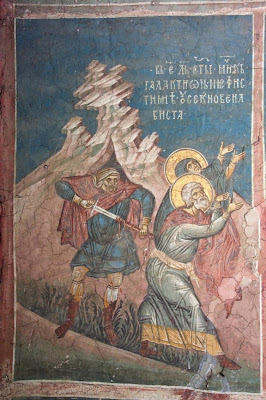 Fresco from Decani Monastery depicting the martyrdom of Sts. Galaction and Episteme (taken from: http://www.srpskoblago.org/Archives/Decani/exhibits/Menologion/November/CX4K3478_l.html)

Excerpt from "A Synoptic View of the Orthodox Ascetical Tradition of Mount Sinai", by Archimandrite Isaiah of Simonopetra
"Certainly, by the 3rd century, the presence of Christian ascetics in Sinai is known, because, during the reign of Diocletian (284-305), Bedouin tribesmen, then still idolaters, killed and sacrificed monks instead of camels to their gods. These monks are probably to be identified with the Abbades of Sinai and Raitho, whose Martyrdom the Orthodox Church celebrates on the 14th of January. A "Discourse upon the Holy Fathers slain on Mount Sinai and Raitho" was written by the Egyptian Abba Ammonius, who became one of the first ascetic spiritual advisers at the Byzantine Imperial Court in the late 4th century, and ended his life as the Metropolitan of Adrianople in Thrace. 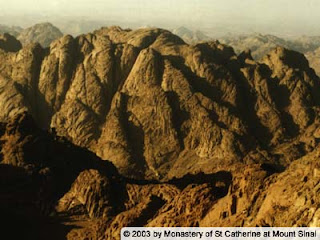 Picture (I believe) of the Mountain of Sts. Galakteon and Episteme (taken from: http://www.sinaimonastery.com/en/index.php?lid=50#)

Just before this, under the Emperor Decian (250), the martyrdom took place of Galaction and Episteme, a young married couple, so the story goes, living in chastity. Instructed by their spiritual mentor Onouphrius and by mutual consent, they had spent periods apart in solitary ascesis on Mount Sinai, where their relics were conveyed after death. A pure legend say, some, a travesty of marriage, say others, an exemplary triumph over nature, says the Orthodox Church."
(taken from: http://www.aegeantimes.gr/pigizois/agglika/inegl_32.htm) 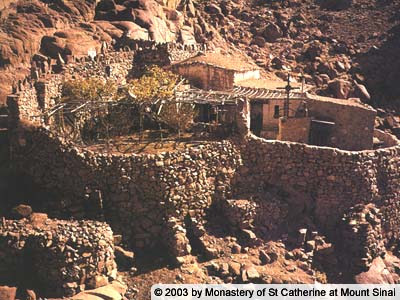 Picture (I believe) of the Hermitage of Sts. Galaction and Episteme; Elder Paisios the Athonite lived here for two years (1962-1964) in great asceticism. (taken from: http://www.sinaimonastery.com/en/index.php?lid=50#; http://www.balamandmonastery.org.lb/fathers/fatherspaisios1.htm#top)


The Mountain of Sts. Galakteon and Episteme (Jebel el-Deir)
"The mountain to the north of the monastery [of St. Catherine at Mount Sinai] derives its name from Saints Galakteon and Episteme, who lived in asceticism at Sinai before their subsequent martyrdom in the reign of the Emperor Decius. The hermitage dedicated to their memory is a small complex with a chapel, two cells, and a kitchen area, located some forty-five minutes from the monastery. From the complex, the pilgrim has a commanding view of the summit of Sinai opposite."
(taken from: http://www.sinaimonastery.com/en/index.php?lid=50#) 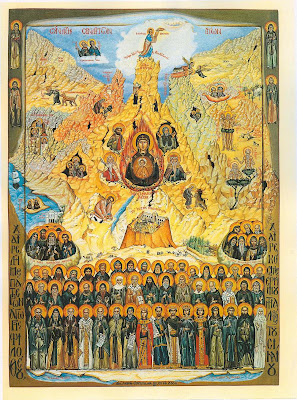 Icon of the Synaxis of the Fathers of Mount Sinai (taken from: http://www.pigizois.net/galery/agiografies/sinaxi_sinaiton_pateron.jpg) 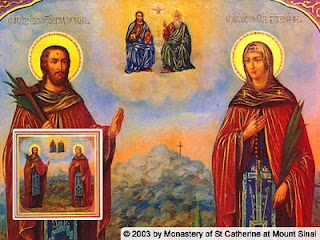 Another icon of Sts. Galaction and Episteme (taken from: http://www.sinaimonastery.com/en/index.php?lid=50#)

Kontakion - Tone 2
You are numbered among the hosts of martyrs for you were illustrious in mighty contests. Galácteon, together with Epistémis, your faithful wife and companion in struggle, unceasingly intercede to the one God for us all.
(taken from: http://www.oca.org/FStropars.asp?SID=13&ID=103176) 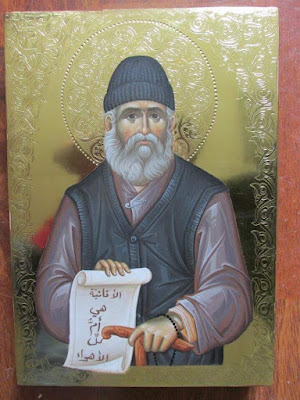 St. Paisios the Athonite (source)
Through the prayers of our Holy Fathers, Lord Jesus Christ our God, have mercy on us and save us! Amen!
Posted by Agioi_Anargyroi at 8:01 AM

Labels: Lives of the Saints, Mount Sinai, St. Paisios of the Holy Mountain

Thanks very much for this beautiful article.


I would like to make you a question, do you know if women can visit the monastery of Mount Sinai? Somebody told me that women are not allowed to enter the monastery as male pilgrims are, and I'm suffering much for this. Do you know about this?

Thank you for your question.

I've never been to St. Catherine's Monastery at Mount Sinai, so I have no first-hand experience.

The Monastery website has a page with info for pilgrims (http://www.sinaimonastery.com/en/index.php?lid=9), and doesn't specifically mention that it is closed to women. In addition, I think I remeber reading somewhere that Fr. Paisios was shocked at the disrespectful dress of some of the female pilgrims to the Monastery when he was there. Thus I tend to think that the Monastery receives female pilgrims, though I'm not totally sure. If anyone knows for sure, please respond.

Though in general, according to Elder Moses the Athonite (source below), Orthodox Monasteries of the East have generally prohibited or guarded entry towards those of a different gender to the Monastics. While this might not always be as evident as Mount Athos or St. Sabbas Monastery, it is clear that most lay people (especially those of the opposite gender) are not allowed to wander freely throughout most monasteries, and especially into the cells of the monastics, etc.