St. Orestes the Martyr of Cappadocia 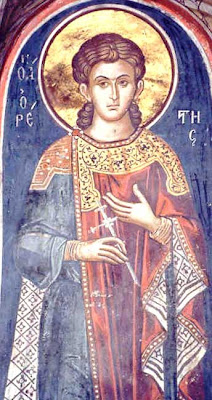 St. Orestes the Martyr of Tyana of Cappadocia - Commemorated on November 10th (icon taken from: http://christopherklitou.com/icon_10_nov_orestes.htm)
"Orestes was from the town of Tyana in Cappadocia. He was a Christian from birth and a physician by profession. He was harshly tortured by a certain wicked eparch Maximus during the reign of Diocletian. When the eparch at first advised him to deny Christ and worship idols, Orestes replied: ``If you knew the power of the Crucified One, you would reject idolatrous falsehoods and worship the true God.'' For this, he was savagely beaten, scraped, pulled apart on the rack, burned with a red-hot iron, and cast into prison to die of starvation. The young Orestes spent seven days without bread or water. On the eighth day, he was again brought before the eparch who threatened him with frightening tortures. Orestes answered: ``I am prepared to endure every pain, having the sign of my Lord Jesus Christ inscribed on my heart.'' The governor condemned him, and the torturers hammered twenty iron nails into his feet and tied him to a horse, dragging him over thorns and rocks until the martyr of God breathed his last. On the place where they discarded Orestes's body, a man bright as the sun appeared, gathered Orestes's relics, and carried them to a hill near the town of Tyana, honorably burying them there. This wonderful saint appeared to St. Dimitri of Rostov after his repose, and showed him all the wounds on his body.***" (http://www.westsrbdio.org/prolog/prolog.htm) 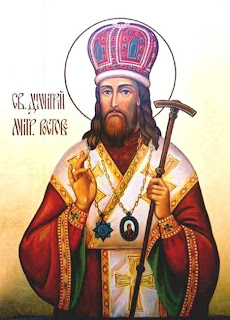 St. Dimitri of Rostov - Commemorated on October 28th and September 21st (taken from: http://christopherklitou.com/icon_21_sept_dimitri_rostov.htm)
"***On another occasion, St. Orestes the Martyr (November 10) appeared to him, just as St. Dimitri had finished writing the saint's life, and said: ``I endured greater tortures for Christ than those you have written.'' He then showed him his left side and said: ``This was pierced with a red-hot iron.'' He then showed him his left hand and said: ``There I was slashed.'' Finally, he showed him his leg above the knee and said: ``And this was cut off by a scythe.'' When St. Dimitri wondered if this Orestes visiting him was one of the Five Companions (December 13), the saint discerned his thought and said: ``I am not the one of the Five Companions but rather the one whose life you have just written.'' (http://www.westsrbdio.org/prolog/prolog.htm) 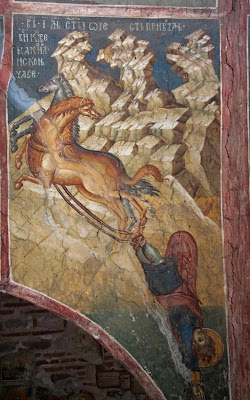 Fresco from Decani Monastery depicting the Martyrdom of St. Orestes of Cappadocia (taken from: http://www.srpskoblago.org/Archives/Decani/exhibits/Menologion/November/CX4K3488_l.html)
Apolytikion in the Fourth Tone
Thy Martyr, O Lord, in his courageous contest for Thee received the prize of the crowns of incorruption and life from Thee, our immortal God. For since he possessed Thy strength, he cast down the tyrants and wholly destroyed the demons' strengthless presumption. O Christ God, by his prayers, save our souls, since Thou art merciful.
Kontakion in the Second Tone
Thine invincibility in contest, O Martyr, was accepted and rewarded by Christ, the Prize-bestower; and He hath granted thee the crown of life and the divine power to work healings, O Orestes, since He is the Friend of man.
(taken from: http://goarch.org/chapel/saints_view?contentid=616&type=saints)
Through the prayers of our Holy Fathers, Lord Jesus Christ our God, have mercy on us and save us! Amen!
Posted by Agioi_Anargyroi at 8:16 AM

Labels: Lives of the Saints, Miracles