The Holy Patriarchal and Stavropegic Monastery of the Holy Glorious Great-martyr Anastasia the "Farmakolytria", Thessalonica 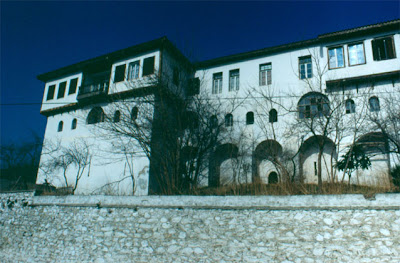 The Monastery of St. Anastasia “Farmakolytrias” (“The Deliverer from Potions”) according to tradition was founded by the empress Theophano, the wife of Leo VI Sophou in 888 AD. However, there aren’t any historical witnesses of the existence of the monastery in the Byzantine years. In 1522, monk Theonas (later Metropolitan of Thessaloniki and Saint) found at that place (between Basilikon and Galatistas) a ruined chapel and built a monastery, which blossomed and was granted awesome and unshakeable privilege and many dependencies, in Chalkidiki and all the Balkans. 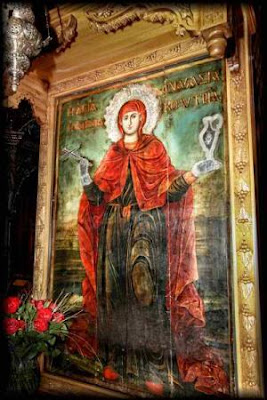 In 1821 the Turks burned the monastery and its entrance and slaughtered all of the monastics. From that time are preserved only the south wing, with the stavrotholia. The rest of the buildings were rebuilt after the catastrophe of the Turks. In the monastery is the chapel of Sts. Kerykos and Julitta, from was painted by painters from Galatsianous in the 19th century, and remains one of the few surviving examples of post-Byzantine painting from the area of Chalkidiki. 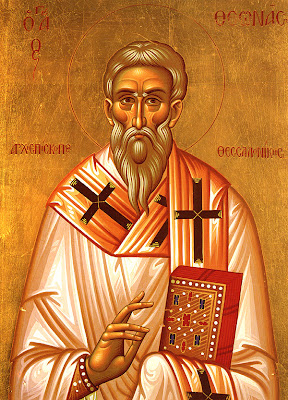 St. Theonas the Archbishop of Thessaloniki, who re-founded of the Monastery of St. Anastasia (+1541 - Commemorated on the Fourth Sunday of Great Lent) (0404theonasthessalonika.JPG)

Among the treasures of the Monastery are the part of the Precious Cross, the Holy Skull and part of the right foot of St. Anastasia, and the wonderworking and incorrupt body of St. Theonas.
(translated and summarized from: http://www.agro-tour.net/web/guest/art_culture/~/topicarts/view/44828/209/164?_topicarts_redirect=%2Fweb%2Fguest%2Fart_culture%2F%257E%2Ftopic%2F209%2F164%3F_topicarts_page%3D2; http://www.patriarchate.org/patriarchate/jurisdiction/organizations/monasteries?searched=anastasia&advsearch=oneword&highlight=ajaxSearch_highlight+ajaxSearch_highlight1) 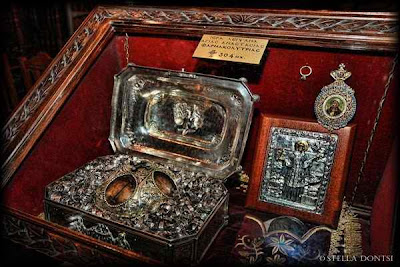 The miraculous Holy Skull and Right Foot of St. Anastasia the Great Martyr, Pharmakolytria ("The Deliverer from Potions") (http://www.amen.gr/uploads/EIKONES/KARA%20AGIAS%20ANASTASIAS%20FARMAKOLITRIAS.jpg) 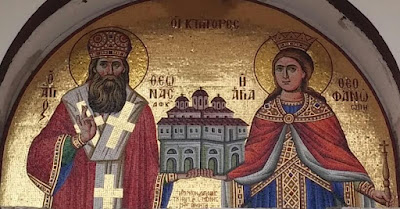 The Founders of the Monastery of St. Anastasia: Sts. Theonas and Theophano (source)


Through the prayers of our Holy Fathers, Lord Jesus Christ our God, have mercy on us and save us! Amen!
Posted by Agioi_Anargyroi at 3:52 PM