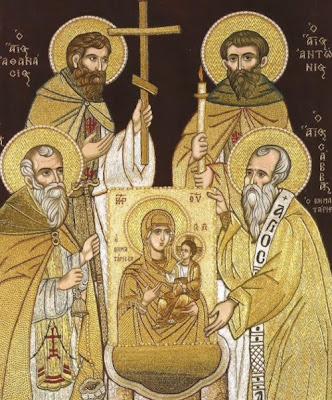 Icon of the Founders of the Holy Monastery of Vatopedi: Sts. Athanasios, Anthony, Nicholas, and Sabbas (holding the icon of Panagia Vimatarissa) (icon taken from: http://vatopaidi.files.wordpress.com/2009/12/oi-ktitores-tis-imm-vatopaidiou-01.jpg)

Sts. Athanasios, Nicholas and Anthony, the Founders of Vatopedi Monastery (10th-11th Century) (Amateur translation and summary of the Greek text from: http://vatopaidi.wordpress.com/2009/12/17/%ce%bf%ce%b9-%cf%8c%cf%83%ce%b9%ce%bf%ce%b9-%ce%ba%cf%84%ce%af%cf%84%ce%bf%cf%81%ce%b5%cf%82-%ce%b1%ce%b8%ce%b1%ce%bd%ce%ac%cf%83%ce%b9%ce%bf%cf%82-%ce%bd%ce%b9%ce%ba%cf%8c%ce%bb%ce%b1%ce%bf%cf%82/)
According to sacred tradition the founders of the Holy Monastery of Vatopedi are believed to be pious princes from Adrianoupolis: Athanasios, Nicholas and Anthony. They came in the middle of the 10th Century, when the Holy Monastery of Megisti Lavra was founded, seeking its founder St. Athanasios the Athonite, who formulated the typikon of the new monastery, and being obedient to the exhortations of the great monk founded and renewed the Monastery of Vatopedi which had been deserted because of pirates. The three righteous ones went forward as rich men, as brothers, as monks and as founders.

The righteous ones came to holy Athos with the desire to build a monastery. The renown of the righteous Athanasios attracted them, along with many others from different places. They offered to remain with him, bringing also the 9000 gold coins which they brought for their task. The righteous Athanasios however told them: “This monastery was founded by the emperor Nikephoros, and if you wish to build a monastery, behold the Monastery of Vatopedi is in ruins. Rebuild this and you will have a reward from God”. The physician-philosopher John Komnenos and later Metropolitan of Drystras Ierotheos in his well-known Guide of the Holy Mountain Athos, which was written in 1698 notes, schematically regarding the three righteous ones: 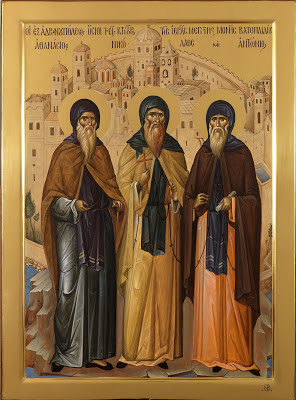 “[summarizing the above, and he continues]...they became monks in [the rebuild Monastery of Vatopedi], and lived God-pleasingly, reposing in the Lord, and their holy relics were placed in the outer narthex of the church, and they are celebrated twice in the year on December 17th and the 5th week of Pentecost”. The righteous Athanasios the Athonite inspired the founding of the athonite monasteries Vatopedi, Iveron, Docheiariou, and Philotheou.

In the apse above their tomb they are portrayed in an icon with the imperial founders, while the three righteous ones have monastic clothing and halos. This fresco was painted in 1760. The tomb is on the right part of the Mesonyktikou of the Katholikon of the monastery, which was opened in 1993 to reveal the bones of the righteous ones and a plaque in which the righteous Athanasios mentions that they should not bury anyone else in that tomb, according to ancient custom.

The study, the writings, etc. tend to concede that the first abbot of Vatopedi Monastery is the founder monk Nicholas, who was buried first in the tomb in the Katholikon after 1012. In this year he wrote for the last time. In 1048 Athanasios wrote for the last time, who was buried second, in the upper portion of the same tomb, where later Anthony was also buried. The final transformation of the tomb into a reliquary and the icon of Panagia Blachernitissa placed above in 1312 indicate that the three founders were early honored as righteous Saints.

From Monk Moses of the Holy Mountain, Vatopedino Synaxari, published by the Holy Monastery Great Monastery of Vatopedi, Mount Athos, 2007. 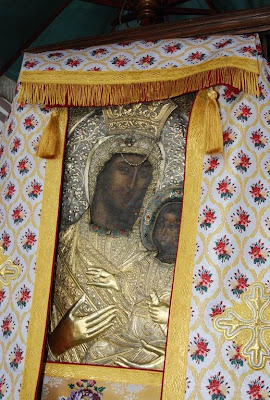 Icon of Panagia Vimatarissa from Vatopedi Monastery (taken from: http://vatopaidi.files.wordpress.com/2009/04/resize-of-dsc_31981.jpg)


Miraculous Icon of Panagia Vimatarissa, or Ktitorissa
"When on one occasion the Arabs raided the Monastery, the deacon-Monk [Sabbas, depicted in the icon at the top of the page] and vematares (the monk in charge of the sanctuary – vema – and, consequently, responsible for the sacred relics and other treasures kept there) managed to hide in the shaft below the altar (an ancient sacrarium) a priceless icon of the Theotokos and a cross, placing before them a burning candle. The Monastery was looted and the monks taken prisoners to Crete. After 70 years, the deacon-monk, who was still alive, was released, and returned to the Monastery. He opened the well and found the icon and the cross upright on the surface of the water, while the candle was still burning. The icon is today kept on the synthronon of the sanctuary and is called the “Ktitorissa” (Foundress), perhaps because the finding of it is linked in some way with the building of the Monastery by the three brothers and founders of the Monastery Athanasius, Nicholas and Antony, who were monks there around the end of the 10th century."
(taken from: http://mountathos.gr/active.aspx?mode=en{0bc0e16a-bb01-422b-9e36-e3fb872c7cf6}View) 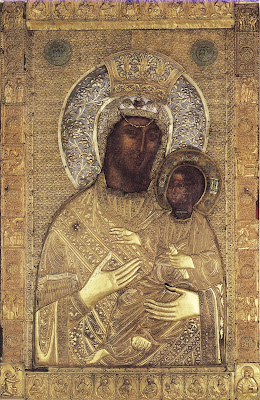 The wondrous icon of Panagia Vimatarissa, Vatopedi Monastery, Mount Athos (source)
Most-Holy Theotokos, save us!
Through the prayers of our Holy Fathers, Lord Jesus Christ our God, have mercy on us and save us! Amen!
Posted by Agioi_Anargyroi at 9:16 AM

Labels: Historic Churches/Pilgrimages, Icons of the Theotokos, Lives of the Saints, Mount Athos