St. Eugenia the Righteous Virgin Martyr, and those with her 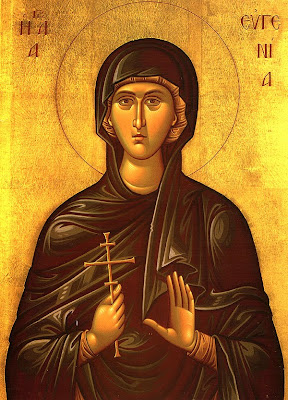 St. Eugenia the Righteous Virgin Martyr, and those with her - Commemorated on December 24 (icon taken from: http://ocafs.oca.org/FeastSaintsViewer.asp?SID=4&ID=1&FSID=103631)
"The Holy Martyr Eugenia, was a Roman by birth. She lived at Alexandria, where her father Philip was sent by the emperor Commodus (180-192) to be Prefect of Egypt. Eugenia received a fine upbringing and was noted for her beauty and good disposition. Many illustrious youths sought her hand, but she did not wish to marry anyone, for she was determined to preserve her virginity.

Providentially, she became acquainted with the Epistles of the Apostle Paul. She yearned with all her soul to become a Christian, but kept this a secret from her parents. At that time, Christians were banished from Alexandria by the command of the emperor. Wishing to learn more about Christian teachings, she asked permission to visit one of the family estates outside the city, supposedly to enjoy the countryside. She left in the company of her two servants Protus and Hyacinthus, dressed in men's clothes. She and her companions were baptized at a certain monastery by Bishop Elias (July 14), who learned about her in a vision. He blessed her to pursue asceticism at the monastery disguised as the monk Eugene.

By her ascetic labors, St Eugenia acquired the gift of healing. Once, a rich young woman named Melanthia turned to her for help. Seeing "Eugene," this woman burned with an impure passion, and when she was spurned, she falsely accused the saint of attempted rape. St Eugenia came to trial before the Prefect of Egypt (her father), and she was forced to reveal her secret. Her parents and brothers rejoiced to find the one for whom they had long grieved.

After a while they all accepted holy Baptism. But Philip, after being denounced by pagans, was dismissed from his post. The Alexandrian Christians chose him as their bishop. The new Prefect, fearing the wrath of the people, did not dare to execute Philip openly, but sent assassins to kill him. They inflicted wounds upon St Philip while he was praying, from which he died three days later. 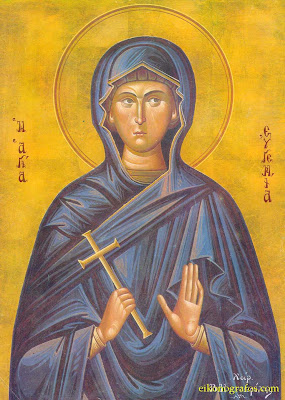 Icon of St. Eugenia (Icon courtesy of www.eikonografos.com used with permission)
St Claudia went to Rome with her sons, daughter, and her servants. There St Eugenia continued with monastic life, and brought many young women to Christ. Claudia built a wanderers' hostel and aided the poor. After several peaceful years, the emperor Galienus (260-268) intensified the persecution against Christians, and many of them found refuge with Sts Claudia and Eugenia.

Basilla, an orphaned Roman girl of imperial lineage, heard about the Christians and St Eugenia. She sent a trusted servant to the saint asking her to write her a letter explaining Christian teachings. St Eugenia sent her friends and co-ascetics, Protus and Hyacinthus, who enlightened Basilla, and she accepted holy Baptism.

Basilla's servant then told her fiancé Pompey that his betrothed had become a Christian. Pompey then complained to the emperor against the Christians for preaching celibacy and denouncing idolatry. Basilla refused to enter into marriage with Pompey, and so they killed her with a sword.

They dragged Sts Protus and Hyacinthus into a temple to make them sacrifice to the idols, but just as they entered, the idol fell down and was shattered. The holy Martyrs Protus and Hyacinthus were beheaded. They also brought St Eugenia to the temple of Diana by force, but she had not even entered it, when the pagan temple collapsed with its idol. 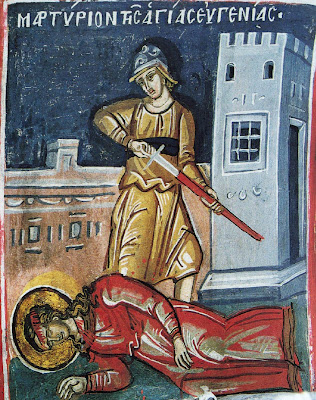 The Martyrdom of St. Eugenia the Righteous Virgin Martyr (http://pravicon.com/images/sv/s0680/s0680002.jpg)
They threw the holy martyr into the Tiber with a stone about her neck, but the stone became untied and she remained unharmed. She also remained unscathed in the fire. Then they cast her into a pit, where she remained for ten days. During this time the Savior Himself appeared to her and said that she would enter into the heavenly Kingdom on the day He was born. When this radiant Feast came, the executioner put her to death with a sword. After her death, St Eugenia appeared to her mother to tell her beforehand the day of her own death."
(taken from: http://ocafs.oca.org/FeastSaintsViewer.asp?SID=4&ID=1&FSID=103631) 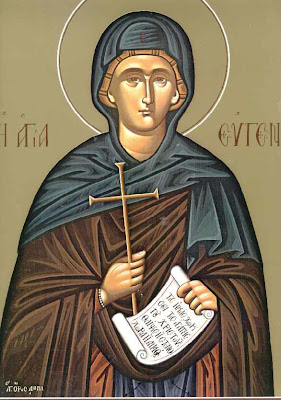 Icon of St. Eugenia (taken from: http://2.bp.blogspot.com/_GcLAjo-5_CM/SzFIWBqGqRI/AAAAAAAAKiY/_sD_LYpUCeM/s1600-h/24.jpg)
Apolytikion in the Third Tone
Being mystically moved by the Spirit, thou didst sing God's praise, thereby receiving the clear light of divine knowledge in thy heart; and shining bright as the sun with a righteous life, thou overcamest the devil in martyrdom. O Eugenia, thou most glorious Martyr of the Lord, entreat Christ God to grant great mercy unto us.
Kontakion in the Fourth Tone
Fleeing from the fleeting world's temporal glory, thou didst greatly long for Christ, and didst preserve wholly unhurt the high nobility of thy soul, O godly Martyr, all-lauded Eugenia.
(taken from: http://goarch.org/chapel/saints_view?contentid=351)
Through the prayers of our Holy Fathers, Lord Jesus Christ our God, have mercy on us and save us! Amen!
Posted by Agioi_Anargyroi at 9:26 PM