St. Juliana the Virgin Martyr of Nicomedia, and those with her

St. Juliana the Virgin Martyr of Nicomedia, and those with her - Commemorated on December 21 (icon taken from: http://4.bp.blogspot.com/_GcLAjo-5_CM/Sy1f_n1WZZI/AAAAAAAAKeQ/Ry0VSxwJD34/s1600-h/AgiaIouliani01.jpg)
"The Holy Virgin Martyr Juliana, daughter of an illustrious pagan named Africanus, was born in the city of Nicomedia. As a child, she was betrothed to a certain Elusius, one of the emperor's advisors. St Juliana was endowed with a profound intellect and goodness of soul. She saw through the delusion and deception of the pagan faith, and secretly accepted holy Baptism.

When the time of her wedding approached, Juliana refused to be married. Her father urged her not to break her engagement, but when she refused to obey him, he began to beat her viciously. Then Africanus handed his daughter over to the Eparch, who happened to be Elusius, Juliana's former fiancé. Elusius fervently asked Juliana to marry him, promising not to require her to abandon her faith. St Juliana refused and said that she'd rather be put to death.

They beat the saint both long and harshly, but after each beating she received healing and new strength from God. Her punishment took place before a large number of people. Of these, 500 men and 150 women came to confess Christ after witnessing the steadfastness and courage of the holy virgin miraculously healed from her wounds. They were all beheaded, and were baptized in their own blood.

Convinced of the futility of attempting to separate the holy virgin from her heavenly Bridegroom, Eleusius sentenced Juliana to death. She accepted the sentence with joy and glorified the Lord for permitting her to receive a martyr's crown. The holy Martyr Juliana was executed in the year 304.

St Juliana is the subject of an Anglo-Saxon poem, believed to have been written by Cynewulf in the eighth century." 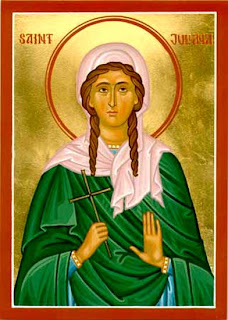 Icon of St. Juliana the Virgin Martyr (taken from: http://christopherklitou.com/icon_21_dec_juliana_of_nicomedia.htm)
Troparion - Tone 4
All-blameless bride and venerable trophy-bearer, you are wedded to the Word of the immortal Father, O glorious Juliana. For having wisely disdained your mortal bridegroom, you strove beyond nature to destroy the serpent, and now you delight in the joys of your Bridegroom!
Kontakion - Tone 1
You were a beautiful virgin, wise Juliana, and as your soul was wounded with divine love, your body was also pierced with the wounds of martyrdom adorning you as a bride of Christ and His martyr. Now as you dwell in the heavenly bridal chamber, you pray for us all.
(taken from: http://www.oca.org/FStropars.asp?SID=13&ID=103601)
Through the prayers of our Holy Fathers, Lord Jesus Christ our God, have mercy on us and save us! Amen!
Posted by Agioi_Anargyroi at 2:54 PM