St. Anysia the Righteous Virgin Martyr of Thessaloniki - Commemorated on December 30 (Icon courtesy of www.eikonografos.com used with permission)
"The Holy Virgin Martyr Anysia lived in the city of Thessalonica during the reign of the emperor Maximian (284-305). Upon the death of her parents, who had raised her in Christian piety, St Anysia sold everything she owned, distributing her riches to the poor, and she began to lead a strict life of fasting, vigil, and prayer.

[Fervent in her love for Christ, she often said: ``Oh, how false is the life of youth, for you either scandalize or are scandalized. Better is old age; but sorrow overcomes me because of the length of time that separates me from heaven.''...When sleep overcame her she would say to herself: ``It is dangerous to sleep while my enemy keeps vigil.'' (http://www.westsrbdio.org/prolog/my.html?month=December&day=30)]

During his persecution against Christians, Maximian issued an edict stating that anyone had the right to kill Christians with no fear of punishment. Soon there were many bodies to be found in cities, towns, and by the roadside. Once, when St Anysia was on her way to church, a pagan soldier stopped her and demanded that she come along to the festival of the sun to offer sacrifice. St Anysia gently pulled herself away from him. When he soldier boldly grabbed her and attempted to tear the veil from her head, she shoved him, spit in his face and said, "My Lord Jesus Christ forbids you!"

In anger, the soldier ran her through with his sword. Those gathering over her body wept and loudly complained against the cruel emperor for issuing an edict that resulted in the death of many innocent people. Christians buried the martyr near the city gates, and a chapel was built over her grave."
(taken from: http://ocafs.oca.org/FeastSaintsViewer.asp?SID=4&ID=1&FSID=103691) 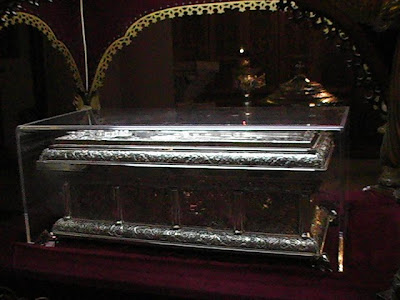 The Holy Relics of St. Anysia, treasured in the Church of St. Demetrios, Thessaloniki (taken from: http://commons.orthodoxwiki.org/images/1/13/Anysia01.JPG)
HYMN OF PRAISE
The Holy Martyr Anysia
by St. Nikolai Velimirovch
Holy Anysia prays to God,
Continually kneeling and shedding tears:
``O Jesus, God and Lord,
The Source of eternal life,
The Treasury of incorruptible goods:
Help me, O God, help me,
To remain a virgin until death,
As a virgin to enter into rest,
And to become worthy of Thy Kingdom.
Grant me, O Savior, Thy grace,
To be able to suffer for Thee,
To sacrifice myself for Thee.
I desire to be a sacrifice to my God-
Oh, help me to gain what I desire!''
God heard the virgin Anysia,
And gave her His grace
To be able to suffer for Him.
Holy Anysia, now in Paradise,
Shines as a star among the stars,
Shines as an angel among the angels,
Praying for us to the Immortal Christ.
(taken from: http://www.westsrbdio.org/prolog/my.html?month=December&day=30) 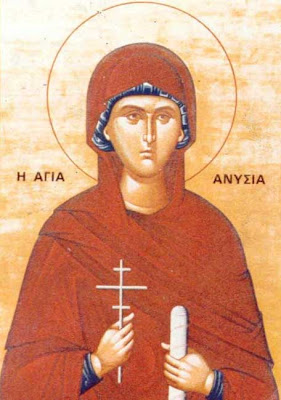 St. Anysia the Virgin Martyr of Thessaloniki (taken from: http://christopherklitou.com/icon_30_dec_anysia_of_thessalonica.htm)
Troparion - Tone 4
Your lamb Anysia calls out to You, O Jesus, in a loud voice: "I love You, my Bridegroom, and in seeking You I endure suffering. In baptism I was crucified so that I might reign in You, and I died so that I might live with You. Accept me as a pure sacrifice, for I have offered myself in love." Through her prayers save our souls, since You are merciful.
Apolytikion in the Fourth Tone (amateur translation)
You righteously traveled the path of virtue, and were betrothed to the Word, O chaste Anysia, and you rejoiced in your struggle, as Melane shines with the radiance of dispassion, shining in the world with the rays of virtue; and now entreat ye Christ the Lord.
(http://tro-ma-ktiko.blogspot.com/2011/12/blog-post_116.html)

Kontakion - Tone 3
As a two-fold lamp you illumine the Church of Christ with truly mystical radiance. You brought forth a hundred-fold fruit through your contest, O Anysia; and you shone forth in asceticism, O Melania. You were both found worthy of the incorruptible life of the righteous.
(taken from: http://www.oca.org/FStropars.asp?SID=13&ID=103691) 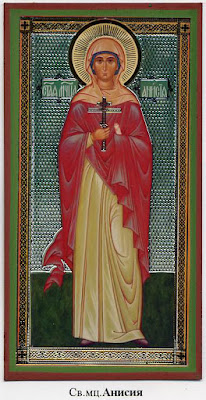 St. Anysia the Virgin Martyr of Thessaloniki (http://pravicon.com/images/sv/s0199/s0199005.jpg)
Christ is born! Glorify Him!
Posted by Agioi_Anargyroi at 4:29 PM

Holy Martyr Anisia, pray for us!