St. Ignatios the God-bearer of Antioch, and Excerpts from his Epistle to the Romans 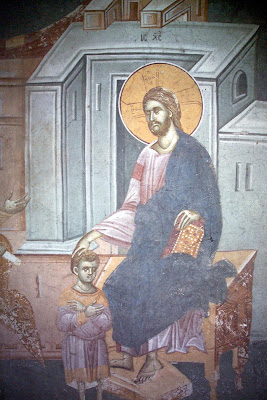 Detail of fresco from Gracanica depicting Christ holding St. Ignatios as a child (Matthew 18:4) (taken from: http://srpskoblago.org/Archives/Gracanica/exhibits/digital/s2-e1e4/large/s2-e1e4-19.jpg)
The Hieromartyr Ignatius the God-bearer - Commemorated on December 20th
"This holy man is called ``the God-bearer'' because he constantly bore the name of the Living God in his heart and on his lips. According to tradition, he was thus named because he was held in the arms of God Incarnate, Jesus Christ. On a day when the Lord was teaching His disciples humility, He took a child and placed him among them, saying: Whosoever therefore shall humble himself as this little child, the same is greatest in the Kingdom of Heaven (Matthew 18:4). This child was Ignatius. Later, Ignatius was a disciple of St. John the Theologian, together with Polycarp, Bishop of Smyrna. As Bishop of Antioch, Ignatius governed the Church of God as a good shepherd and was the first to introduce antiphonal chanting in the Church, in which two choirs alternate the chanting. This manner of chanting was revealed to St. Ignatius by the angels in heaven. When Emperor Trajan was passing through Antioch on his way to do battle with the Persians, he heard of Ignatius, summoned him and counseled him to offer sacrifice to the idols. If Ignatius would do so, Trajan would bestow upon him the rank of senator. As the counsels and threats of the emperor were in vain, St. Ignatius was shackled in irons and sent to Rome in the company of ten merciless soldiers, to be thrown to the wild beasts. Ignatius rejoiced in suffering for his Lord, only praying to God that the wild beasts would become the tomb for his body and that no one would prevent him from this death. After a long and difficult journey from Asia through Thrace, Macedonia and Epirus, Ignatius arrived in Rome, where he was thrown to the lions in the circus. The lions tore him to pieces and devoured him, leaving only several of the larger bones and his heart. This glorious lover of the Lord Christ suffered in the year 106 in Rome at the time of the Christ-hating Emperor Trajan. Ignatius has appeared many times from the other world and worked miracles, even to this day helping all who call upon him for help." 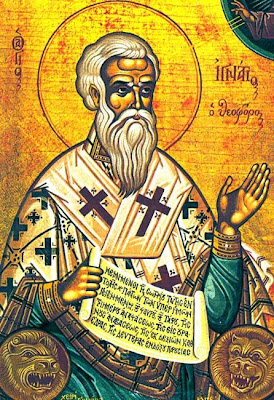 Icon of St. Ignatios the God-bearer of Antioch (taken from: http://christopherklitou.com/icon_20_dec_ignatius_of_antioch.htm)
REFLECTION
"The holy martyrs, seized with the love of Christ, were like unquenchable flames. This love eased their sufferings and made their deaths sweet. St. Chrysostom says of St. Ignatius: ``He put off his body with as much ease as one takes off his clothes.'' Traveling to Rome to his death, Ignatius feared only one thing: that Christians would somehow prevent his martyrdom for Christ, by their prayers to God or in some outward manner. Therefore he continually implored them, in writing and in speech, not to do this. ``Forgive me,'' he said. ``I know what is for my benefit. I but begin to be a disciple of Christ when I desire nothing, either visible or invisible, save to attain Christ. May every diabolical torture come upon me: fire, crucifixion, wild beasts, the sword, tearing asunder, the crushing of my bones, and the dismemberment of my whole body-only that I may receive Jesus Christ. It is better for me to die for Christ than to reign to the ends of the earth…. My love is nailed to the Cross, and there is no fire of love in me for any earthly thing.''*** When he was brought to the circus, he turned to the people with these words: ``Citizens of Rome, know that I am not being punished for any crime, neither have I been condemned to death for any transgression, but rather for the sake of my God, by Whose love I am overcome and Whom I insatiably desire. I am His wheat, and the teeth of the wild beasts will grind me to be His pure bread.'' When he had been devoured by the wild beasts, by God's providence his heart remained among the bones. When the unbelievers cut open the saint's heart, they saw inside, inscribed in golden letters, the name Jesus Christ."
(taken from: http://www.westsrbdio.org/prolog/prolog.htm) 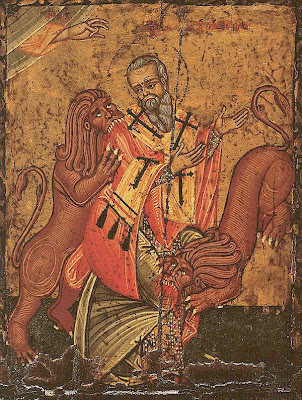 Fresco of St. Ignatios the God-bearer from Studenica (taken from: http://www.srpskoblago.org/Archives/Studenica/Kings_Church/exhibits/e/large/e-l1-18-24.jpg)
Apolytikion in the Fourth Tone
As a sharer of the ways and a successor to the throne of the Apostles, O inspired of God, thou foundest discipline to be a means of ascent to divine vision. Wherefore, having rightly divided the word of truth, thou didst also contest for the Faith even unto blood, O Hieromartyr Ignatius. Intercede with Christ our God that our souls be saved.
Kontakion in the Third Tone
The divine and brilliant day of thine illustrious contests doth proclaim to all mankind Him that was born of a Virgin; for it was for Him that thou didst thirst to delight in, and didst haste to be devoured by beasts in thy longing. Hence, O glorious Ignatius, the name God-bearer was rightly given to thee.
(taken from: http://goarch.org/chapel/saints_view?contentid=346)

Through the prayers of our Holy Fathers, Lord Jesus Christ our God, have mercy on us and save us! Amen!
Posted by Agioi_Anargyroi at 10:00 AM