St. Nicholas feeds the Athonite Fathers during the Fascist Occupation 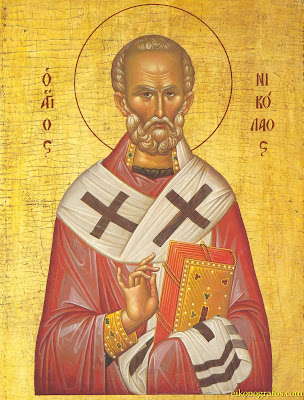 Icon of St. Nicholas the Wonderworker Archbishop of Myra (Icon courtesy of www.eikonografos.com used with permission)
St. Nicholas feeds the Athonite Fathers during the Fascist Occupation
"What are you doing?" the unknown priest asked. "Is this all the wheat you have? No more?"

The fathers at the Athonite monastery replied that this was all they had indeed. It was December, and they were unable to buy any more because of the Fascist Occupation. It should be noted that 10,000 okas' weight of wheat was needed a year for the monastery's survival, and that they could not even buy one oka of it.

The unknown priest took a few wheat kernels in his hand, blessed them and threw them on top of the rest of the wheat. He blessed the four points of the horizon, the monastery, and the sea, and then was about to leave.

"Where do you come from?" the fathers asked him. "Stay to have some bread and olives."

"I come from very far away -- from Myra in Lycia," he said and departed.

One of the brothers had in the meantime gone for some food to offer the visitor, but the elder, who turned out to be the monastery's protector, had vanished. The remaining 150 okas of blessed wheat lasted for half a year, that is, from the month of December when St. Nicholas appeared to them, until the following July when the new crop came in."
(From An Athonite Gerontikon; taken from: http://www.orthodox.net/stnicholas/miracle-nicholas-athos.html)

For the life of St. Nicholas, see: http://full-of-grace-and-truth.blogspot.com/2008/12/life-of-st-nicholas-archbishop-of-myra.html. 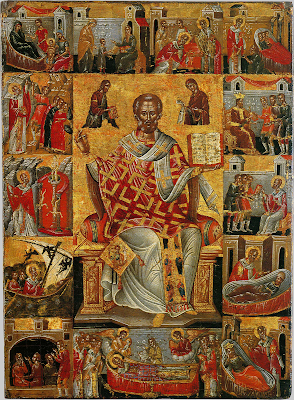 St. Nicholas the Wonderworker, with scenes from his life (http://www.ruicon.ru/images/iconografy/icons/greek-icons-14-18/0088.jpg)
Through the prayers of our Holy Fathers, Lord Jesus Christ our God, have mercy on us and save us! Amen!
Posted by Agioi_Anargyroi at 1:16 PM