A Great Miracle of St. Nektarios - The Healing of Elder Nektarios Vitalis 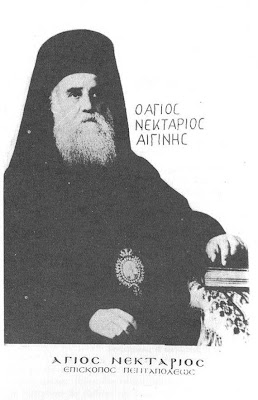 
A Great Miracle of St. Nektarios - The Healing of Elder Nektarios Vitalis (Amateur translation of text from: http://www.imga.gr/enories/ag_nektarios_thaumata.html)

Fr. Nektarios Vitalis, well-known in Lavrio [Attika, Greece] for his deeds and his sympathy to the poor and those written-off by the world in these difficult times, retells the following incident from when he was dying from cancer. What is said below has been told elsewhere, repeatedly, including in the book "I talked to Agios Nektarios" - Athens 1997, by the renowned writer Mr. Manolis Melinos. 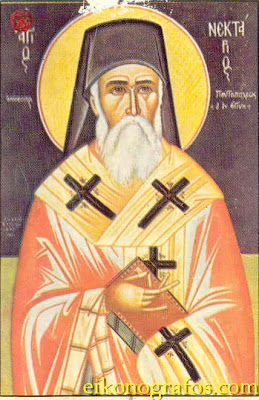 Icon of St. Nektarios (taken from eikonografos.com, used with permission)

Fr. Nektarios Vitalis' words: "I was suffering from a serious form of cancer. My chest was an open wound that was continuously running blood and pus. I would tear my undershirts from the pain. It was a tragic situation, and I was headed directly to death. So you understand, I had even prepared my grave clothes...On the 26th of March 1980, in the morning, I was talking in my office in the basement of the Church with Sofia Bourdoy (the church care-taker [woman who cleans the church]) and the icon painter Helen Kitraki, when the door suddenly opened and an old, unknown man entered. He had a snow-white beard, was short and was slighty bald. He looked exactly the same as St. Nektarios appears in photographs. He took three candles without paying lit only two. He venerated all the icons of the church, but passed over the icon of St. Nektarios without the venerating. He did not see me where I was. I had terrible pains when they pulled aside the curtain of the office and went to see the old man. He faced the Beautiful Gate [the Royal Doors in the Holy Iconostasion], crossed his palms and without looking around he asked,

The church care-taker knowing my disease wanted to "protect" me...
"No, no...he is at home with the flu..."

He replied "Never mind. Pray, and Good Resurrection [the traditional Orthodox greeting during Great Lent in anticipation of Pascha]" as he left.

The church care-taker came running to me and said "Father Nektarios, the old man who just left resembled St. Nektarios himself! His eyes flew flames. It seems to me that was the St. Nektarios and he came to help you..."

I thanked her thinking that she said this to a console me. But deep down something was wrong. I sent her along with the icon painter to find the unknown man and quickly bring him back. I walked into the sanctuary and venerated the Crucified One [the icon of Christ on the Cross in the Holy Altar] crying, and once again asking Christ to heal me. Their footsteps stopped,

"Father, the Elder has come!"

I tried to kiss his hand, but out of humilty he did not let me. He bent and kissed my own! I asked him, "What is your name?"

"Anastasios, my son," he said, relating his baptismal name that had before he become a monk...

I led him to venerate the holy relics. He took out a pair of glasses with only one arm, and as soon as we saw them we were amazed! They were the same glasses of St. Nektarios that we had in the case with the holy relics. They were given to me by the old Gerontissa Nektaria [Abbess or Eldress] of the monastery, in Aegina.

"Belief is everything!" said the stranger, as he put on his glasses.

He began with reverence to embrace all the holy relics as the church care-taker showed, except for the relics of St. Nektarios, which he passed over...

"Geronta, forgive me," I said, "but why don't you venerate the miraculous Saint Nektarios?"

He turned and looked at me smiling. I asked him, "Where are you staying Geronta? He showed me the ceiling, where we were building the new church [dedicated to St. Nektarios], saying,

"My house is still not ready and I'm worried. My position does not allow me to live here and there..."

"Geronta, I must confess, you were told a lie earlier, I have cancer! But I want to get well, to make the Holy Altar, to finish the Church first, and then I can die..."

"Do not worry," he told me. "I'm leaving now. I'm going to Paros [island in Greece] to venerate St. Arsenios and to visit Fr. Philotheos [Zervakos]." he added, starting to leave and passing by the big icon without giving it a second thought...

I stopped him and put my hands to his face.

"My Geronda, my Geronda, your face looks exactly like St. Nektarios who is honored here in our church..."

Then, tears rolled from his eyes...He crossed me and embraced [hugged] me with his hands... Taking courage I opened my hands to hug him. But when I spread out my hands, and while I was watching I could see him before my face, my arms closed back to my chest!

He left from being close to me and stopped in front of his icon and said,

"Oh, my child Nektarios, don't worry. It is a passing trial, and you will be well! The miracle which you are asking for will happen, and it will be told to the whole world. Don't be afraid..."

Immediately he left us by walking through a closed door...

The women ran to catch him. He came to the bus stop. He went inside and disappeared before the bus left!

This story is always told by Fr. Nektarios Vitalis, a respected and reliable person, in the presence of witnesses. Fr. Nektarios eventually became well, frustrating doctors, radiologists, and forecasters of death. Because above all is Christ, our living God, and our intercessors before God the Saints, plus our Mother the Panagia!

Because "where God wills, the laws of nature are overcome..." 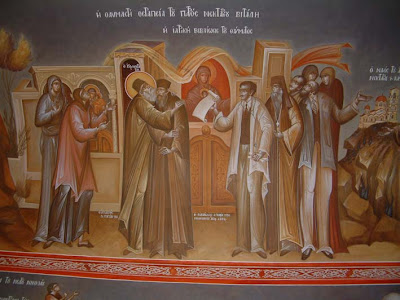 Icon of St. Nektarios embracing and healing Fr. Nektarios Vitalis, along with the two women bearing witness to this to the left, and the doctors confirming the miracle to the right. The icon is from the church of St. Nektarios in Aretaieion Hospital (taken from http://www.eikastikon.gr/xristianika/kordis_erga_agios_nektarios_en.html)

See the following link for a video of Fr. Nektarios Vitalis recounting this incredible miracle himself (in Greek): http://www.pigizois.net/sinaxaristis/11/arxeia/thayma_gerontos.wmv. The following page has more videos and pictures from the pilgrimage he built: http://www.pigizois.net/ieres_mones/i_m_ag_nektariou_kamariza_lavrio_atikis/index_ag_nektarios.htm. Finally, here is the text of a Paraklesis to St. Nektarios written specifically for this great pilgrimage of St. Nektarios in Kamariza, Lavrio, Attica, where St. Nektarios works many miracles: http://voutsinasilias.blogspot.com/2009/11/9.html.

For another great miracle of St. Nektarios, see: http://full-of-grace-and-truth.blogspot.com/2009/11/great-miracle-of-st-nektarios-in.html.

May St. Nektarios intercede for all of us and help us!

Icon of St. Nektarios the Wonderworker, Bishop of Pentapolis (taken from: http://www.rel.gr/photo/displayimage.php?album=26&pos=120)

Apolytikion of St. Nektarios the Wonderworker of Pentapolis in the First Tone
The son of Selybria, the guardian of Aegina, * and the ardent lover of virtue, * who in recent times has appeared, * the God-inspired servant of Christ, * Nektarios, O faithful, let us praise. * For he gushes forth healings of every kind * to those who cry out reverently, “Glory to Christ, who glorified you! * Glory to Him for your miracles! * Glory to Him, who, through you, effects cures for all.”
(taken from: http://sgpm.goarch.org/ematins/bilingual/Nov09.pdf)

Through the prayers of our Holy Fathers, Lord Jesus Christ our God, have mercy on us and save us! Amen!
Posted by Agioi_Anargyroi at 12:03 PM