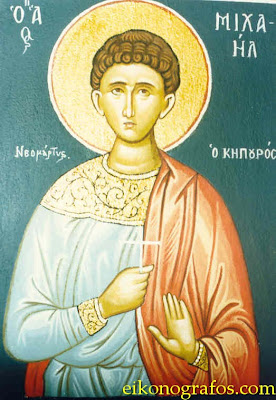 Icon of St. Michael Paknanas the Neomartyr, the Gardener (Icon courtesy of www.eikonografos.com used with permission)
+

"Neomartyr Michael Paknanas was less than twenty years old, and he worked as a gardener in Athens in the [late 18th century]. The Turks, who enslaved Greece at the time, were trying to convince him to become a Muslim. When flattery and wealth failed to persuade him, they put to use some of their more convincing standard missionary work by torturing the teenager. When all the tortures proved to be futile, the executioner was preparing to behead the young man, but at the same time he was feeling some compassion for him. So he began cutting his neck slowly with the sword by administering very light blows, while asking the martyr to reconsider. The martyr's response? "I told you, I am a Christian. I refuse to become a Muslim." The ax-man strikes with another light blow to make some more blood flow, to possibly convince him. The martyr repeats, "I told you, I am a Christian. Strike with all your might, for the faith of Christ." This totally aggravated the executioner. He did exactly that, and St. Michael was sent to the heavenly mansions.
Who taught these very simple but profound words to the teenage martyr? Who else but the Holy Spirit? "Strike with all your might, for the faith of Christ," was the most elegantand apropos response, superior to all the rhetorical abilities of Demosthenes, Socrates and Plato put together, and all the words of the greatest preachers. This most eloquent rhetoric is the work of the Holy Spirit. The confessors and the martyrs make up the spinal cord of our Church. The blood of the martyrs is the greatest proof that Christ is not an idea. Christ did not come to bring us a book. Christ is real." (excerpt taken from the following article on Christian Martyrdom: http://www.saintnicodemos.org/articles/christianmartyrdom.php; for a more thorough account online, see: http://www.johnsanidopoulos.com/2009/06/saint-michael-paknanas-gardner-from.html)
+
Some additional informtion
St. Michael was a parishoner at the church of Panagia Vlasarou, which today is in ruins (see the following link for a photo: http://www.geocities.com/gnwrizontas_tin_athina5/thiseion/P9260169_BLASSAROUa.swf) Also, as he was martyred, he was tied to a pillar of the Temple of the Olympian Zeus in Athens. Today the following inscription there bears witness to this neomartyr's martyrdom: «1771 Ιουλίου 9 απεκεφαλίσθη ο Πακνανάς Μιχάλης» (July 9th 1771 Michael Paknanas was beheaded.) Though he was martyred on July 9th, his feast day is celebrated on June 30th. Finally, because he was a gardner and recommended [σύστηνε?] a diet rich in fruits and vegetables, he has been called a patron saint of dieticians and nutritionists, in addition to gardeners. (translated from: http://misha.pblogs.gr/2008/07/giortazei-o-athhnaios-neomartys-mihahl-o-khpoyros.html) May St. Michael the Neomartyr intercede for us all!
+ 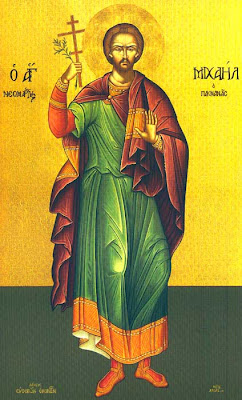 Icon of St. Michael Paknanas the New Martyr of Athens (taken from: http://christopherklitou.com/icon_30_june_michael_pacnanas.htm)
Apolytikion for a Martyr in the Fourth ToneThy Martyr, O Lord, in his courageous contest for Thee received the prize of the crowns of incorruption and life from Thee, our immortal God. For since he possessed Thy strength, he cast down the tyrants and wholly destroyed the demons' strengthless presumption. O Christ God, by his prayers, save our souls, since Thou art merciful.
(taken from: http://www.goarch.org/chapel/saints/422)
Through the prayers of our Holy Fathers, Lord Jesus Christ our God, have mercy on us and save us! Amen!
Posted by Agioi_Anargyroi at 5:49 PM