Sts. Cyprian and Justina the Martyrs of Nicomedia 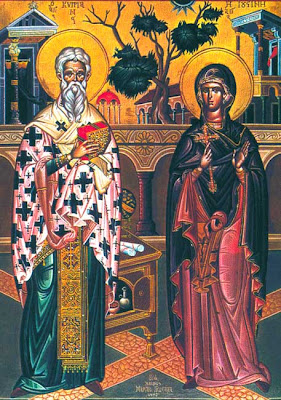 Icon of Sts. Cyprian and Justina the Martyrs of Nicomedia - Commemorated on October 2nd (taken from: http://christopherklitou.com/icon_2_oct_cyprian_justina.htm)

"Hieromartyr Cyprian, Virgin Martyr Justina and Martyr Theoctistus suffered for Christ at Nicomedia in the year 304.

"St Cyprian was a pagan and a native of Antioch. From his early childhood his misguided parents dedicated him to the service of the pagan gods. From age seven until thirty, Cyprian studied at the most outstanding centers of paganism: on Mount Olympus, in the cities of Argos and Tauropolis, in the Egyptian city of Memphis, and at Babylon. 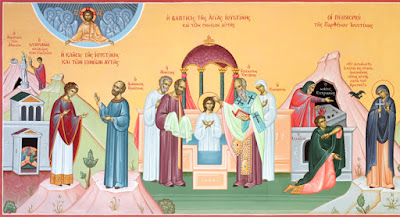 The parents of St. Justina, her baptism, and her being tempted by the demons (source)

Once he attained eminent wisdom in pagan philosophy and the sorcerer's craft, he was consecrated into the pagan priesthood on Mount Olympus. Having discovered great power by summoning unclean spirits, he beheld the Prince of Darkness himself, and spoke with him and received from him a host of demons in attendance.

After returning to Antioch, Cyprian was revered by the pagans as a prominent pagan priest, amazing people by his ability to cast spells, to summon pestilence and plagues, and to conjure up the dead. He brought many people to ruin, teaching them to serve demons and how to cast magic spells. 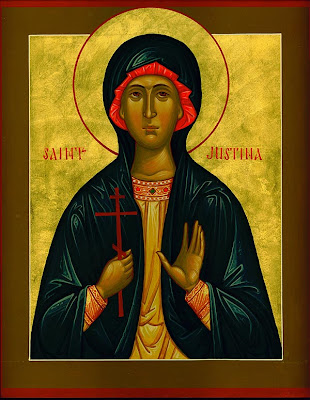 Icon of St. Justina the Virgin Martyr (taken from: http://ocafs.oca.org/FeastSaintsViewer.asp?SID=4&ID=1&FSID=102836)

The holy virgin Justina lived in Antioch. After turning her own father and mother away from pagan error and leading them to the true faith in Christ, she dedicated herself to the Heavenly Bridegroom and spent her time in fasting and prayer. When the youth Aglaides proposed marriage to her, the saint refused, for she wished to remain a virgin. Agalides sought Cyprian's help and asked for a magic spell to charm Justina into marriage. But no matter what Cyprian tried, he could accomplish nothing, since the saint overcame all the wiles of the devil through her prayers and fasting.

Cyrian sent demons to attack the holy virgin, trying to arouse fleshly passions in her, but she dispelled them by the power of the Sign of the Cross and by fervent prayer to the Lord. 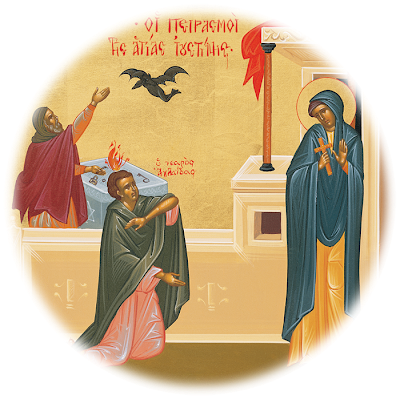 Even though one of the demonic princes and Cyprian himself, assumed various guises by the power of sorcery, they were not able to sway St Justina, who was guarded by her firm faith in Christ. All the spells dissipated, and the demons fled at the mere mention of the saint's name. 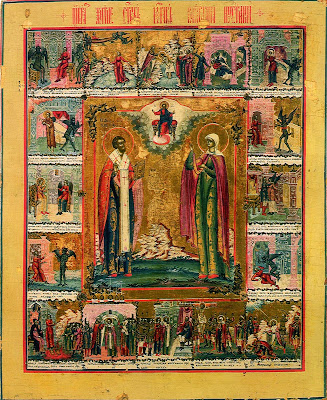 Cyprian, in a rage, sent down pestilence and plague upon Justina's family and upon all the city, but this was thwarted by her prayer. Cyprian's soul, corrupted by its domination over people and by his incantations, was shown in all the depth of his downfall, and also the abyss of nothingness of the evil that he served.

"If you take fright at even the mere shadow of the Cross and the Name of Christ makes you tremble," said Cyprian to Satan, "then what will you do when Christ Himself stands before you?" The devil then flung himself upon the pagan priest who had begun to repudiate him, and attempted to beat and strangle him. 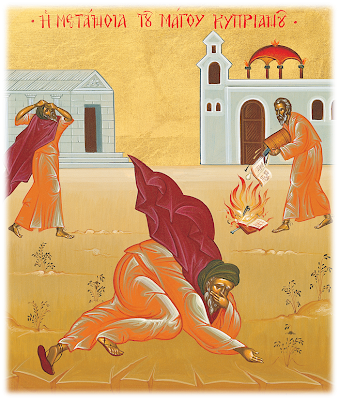 The repentance of St. Cyprian, as he burns his demonic books and potions (http://3.bp.blogspot.com/-DkJ9iQpjL6Y/T1BJaxvxqJI/AAAAAAAACrw/SCB9BitnaOI/s1600/Metania-ag-Kyprianou.png)

St Cyrian then first tested for himself the power of the Sign of the Cross and the Name of Christ, guarding himself from the fury of the enemy. Afterwards, with deep repentance he went to the local bishop Anthimus and threw all of his books into the flames. The very next day, he went into the church, and did not want to leave it, though he had not yet been baptized. 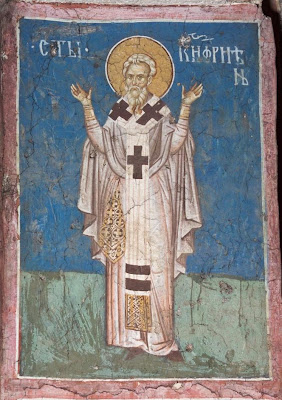 Fresco of St. Cyprian the Hieromartyr, from Decani Monastery (taken and altered from: http://www.srpskoblago.org/Archives/Decani/exhibits/Menologion/October/CX4K3416_l.html)

By his efforts to follow a righteous manner of life, St Cyprian discerned the great power of fervent faith in Christ, and made up for more than thirty years of service to Satan. Seven days after Baptism he was ordained reader, on the twelfth day, sub-deacon, on the thirtieth, deacon. After a year, he was ordained priest. In a short time St Cyprian was elevated to the rank of bishop. The repentance, baptism, and ordination of St. Cyprian (source)

The Hieromartyr Cyprian converted so many pagans to Christ that in his diocese there was no one left to offer sacrifice to idols, and the pagan temples fell into disuse. St Justina withdrew to a monastery and there was chosen Abbess. 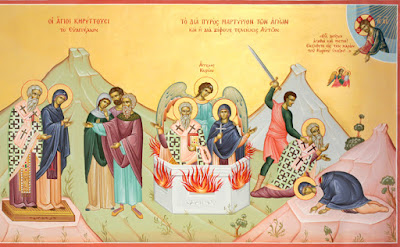 Sts. Cyprian and Justina preaching the Gospel, and being tortured and martyred for Christ (source)

During the persecution against Christians under the emperor Diocletian, Bishop Cyprian and Abbess Justina were arrested and brought to Nicomedia, where after fierce tortures they were beheaded with the sword. St Cyprian, fearful that the holy virgin's courage might falter if she saw him put to death, asked for time to pray. St Justina joyfully inclined her neck and was beheaded first. 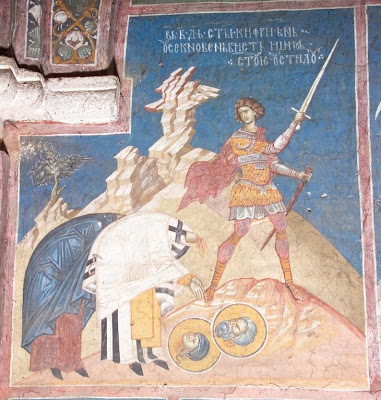 Fresco from Decani Monastery depicting the Martyrdom of Sts. Cyprian and Justina (taken and altered from: http://www.srpskoblago.org/Archives/Decani/exhibits/Menologion/October/CX4K3522_l.html)

The soldier Theoctistus, seeing the guiltless sufferings of St Justina, fell at Cyprian's feet and declared himself a Christian, and was beheaded with them." (taken from: http://ocafs.oca.org/FeastSaintsViewer.asp?SID=4&ID=1&FSID=102835) 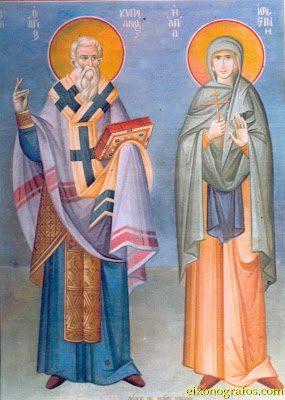 Another icon of Sts. Cyprian and Justina the Martyrs of Nicomedia (Icon courtesy of www.eikonografos.com used with permission)

Apolytikion in the Fourth Tone
As a sharer of the ways and a successor to the throne of the Apostles, O inspired of God, thou foundest discipline to be a means of ascent to divine vision. Wherefore, having rightly divided the word of truth, thou didst also contest for the Faith even unto blood, O Hieromartyr Cyprian. Intercede with Christ our God that our souls be saved.
(taken from: http://goarch.org/chapel/saints_view?contentid=226)

Troparion - Tone 4
You abandoned ungodly darkness, becoming a light of truth; you were illustrious as a pastor; you were glorified in contest: O righteous Father Cyprian together with godly Justina, intercede for us before God the Creator of all!

Kontakion - Tone 1
You turned from the art of sorcery to the knowledge of God, and were shown forth as a skilful healer for the world, Cyprian, inspired by God. Together with Justina you grant cures to those who honor you; with her, pray to the Master who loves mankind that He may save our souls.
(taken from: http://www.oca.org/FStropars.asp?SID=13&ID=102836) 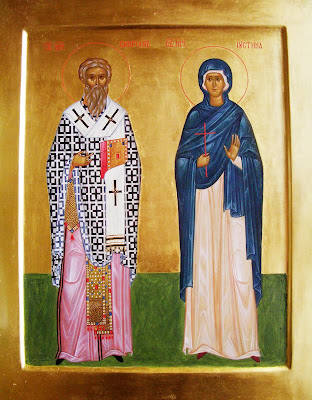 Through the prayers of our Holy Fathers, Lord Jesus Christ our God, have mercy on us and save us! Amen!
Posted by Agioi_Anargyroi at 9:45 AM

Thank you very much for sharing this information in your article. Holy Martyrs, pray for us!

Thanks so much for having this page!