Christallou and the Miracle of Saint Andrew 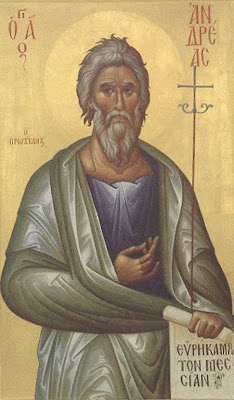 Icon of St. Andrew the First-called Apostle (taken from: http://vatopaidi.files.wordpress.com/2009/11/apostolos-andreas-01.jpg)
Christallou and the Miracle of Saint Andrew: A Folk Tale from Cyprus based on a true story
"There was once a woman named Christallou and this woman had only a son in this world. Her son was very smart and was very good in letters-not only that, but he was also very handsome and vibrant in life.

One day, the Turks came and saw that the boy was [virile] and took him. From that day on his mother cried day and night.

One night, Saint Andrew appeared to her and told her:

-What is the matter and [why are you crying]?

-You should not worry and feel sad, Saint Andrew said to her, he is well looked after where he is.You should not cry, and in ten years from now, go to my Monastery at the karpas and you will find him.

From that day on, the poor woman stopped crying having taken confort from the words of the saint. A year passed by, and another one...Anyways, in order to make things short, the ten years of waiting came to an end. Christallou got ready and took her votive offerings which she dedicated to Saint Andrew and went to his Monastery at the other end of Cyprus. She took holy bread, lit candles, made his comemoration celebration, asked for his prayer, attended the church service, took communion and afterwards went outside the church. She was on guard and was looking around...She saw many foreigners showing up for Saint Andrew's memory celebration. She saw many people comming down from a ship, and among them a Turkish officer, tall, handsome and [virile]. He looked around and his eyes fell on the woman. When he saw her, he recognized her. "She is my mother" he told himself.

-Oh my boy, they stole my son, they stole him, they killed him, I do not know what they did with him. However, Saint Andrew told me to come to his Monastery after ten years time, and I would find him.

-Will you recognize him after such a long time?

-Saint Andrew will help me my boy and I will recognize him.

-Does he have any distinctive spot on his body? He asked her.

-He has on one of his legs.From the time that he was a baby, while playing near the fire herth, a burning charcoal rolled down and fell on one of his legs. He got burned and had a sore before I had the time to run to him as soon as I heared his cries. I took him to a doctor and he put something on the burned spot which made his pain less, and [slowly], the sore got well. However, the burned spot did not recover.

-I also have a burned spot on my leg. He pulled up his clothes, and started weeping.

-Yes it is me! He said, and they both started crying.

Without lossing time, her son went and bought Christian clothes in order to take off the Turkish clothes that he was wearing, and run to the priests and told them his story.

-Come and read me a prayer and make a church service for me, so I can wear my Christian clothes because I found my mother.

The priests read him a prayer, conducted a church service, and gave him communion. After that he burned his Turkish clothes and put on Greek ones.

Can you see now what Saint Andrew can do! We must have faith inside in order that God who is our Master can hear us.Faith and kindness."

A Folk Tale from Cyprus based on a true story.
Transfered into written form by: Charalambos Epaminontas

For the life of St. Andrew see: http://full-of-grace-and-truth.blogspot.com/2008/11/st-andrew-first-called-apostle.html.


Through the prayers of our Holy Fathers, Lord Jesus Christ our God, have mercy on us and save us! Amen!
Posted by Agioi_Anargyroi at 1:41 PM