A miracle of St. Nicholas in Kozani 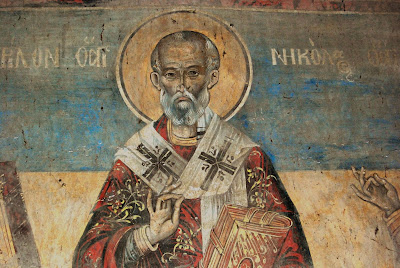 St. Nicholas the Wonderworker, Archbishop of Myra (Icon courtesy of www.eikonografos.com used with permission)
A miracle of St. Nicholas in Kozani (amateur translation from a talk by Metropolitan Augoustinos Kantiotis of Florina, of blessed memory)
"Some say: “‘At that time!’ You make us crazy with this. We constantly hear ‘at that time’, ‘at that time’, ‘at that time’ [a miracle occurred]”. These are not correct, however. It was not only back then that miracles occurred. The power of Christ remains inexhaustible; yesterday and today and tomorrow, and until the close of the age, until the setting of the sun and the rivers cease to flow and the stars cease to shine in the heavens, the power of Christ and of His Saints will work wonders. Do you want an example?
From 1943-1945 I was in Kozani, the capital of Western Macedonia. Those were terrible days for our nation. The rebels seized over 300 people from Kozani, innocent people, and they locked them in prison in Kozani, where they were awaiting their fate. There was great agony throughout the city. The morning of December 6th was the day on which Kozani celebrates St. Nicholas as their patron in their beautiful and historic church of St. Nicholas, Kozani. It was a feast day therefore in Kozani, but the Christians however were so saddened and worried, that that day tears were running from their eyes. Then I was a preacher of the city, and so I ascended the ambo, and moved by sacred emotion, I said the following few words:
“Today St. Nicholas of Kozani celebrates. Today St. Nicholas is in mourning and weeps, for innocent men are in the prisons. As those glorious soldiers were in the prisons and were saved by Nicholas, thus today also, in the prison of Kozani there are these innocent men.” Continuing, in danger of my life, I called out drammatically to the rebels, towards the Captain Marko Vafeiadi, who ruled the region during that time and was an untamed terror. I told them: “In the name of the Nazarene, in the name of the righteous one, in the name of humanity, you must, on this holy day of St. Nicholas, free these innocent men.”
Thus I spoke. And though I was addressing hard hearts, through these the Saint appeased the most relentless characters. As the sun melts wax, thus his intervention melted the hearts of those men. The same evening, before the sun set, the 300 people of Kozani were freed and on the streets of Kozani! And no wonder why the miracle with the three soldiers is especially moving. He saved the three soldiers when he was in Lycia bodily, he saved the three in Constantinope when he was in heaven, and he saved 300 people of Kozani in our days."
(http://www.augoustinos-kantiotis.gr/) 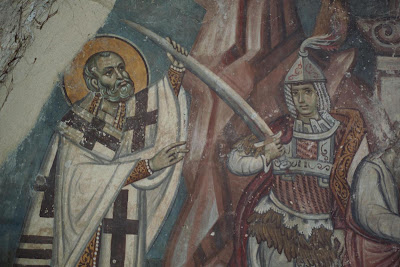 St. Nicholas saving the three innocent men from death (http://www.srpskoblago.org/Archives/Sopocani/exhibits/digital/chapel-n,miracles-an/large/sop-cx4j0633.jpg)
Through the prayers of our Holy Fathers, Lord Jesus Christ our God, have mercy on us and save us! Amen!
Posted by Agioi_Anargyroi at 7:41 PM

Dear brother in Christ,
I took the liberty of translating your post into French. It will be on my bog on the December 8, 2010
at
http://orthodoxologie.blogspot.com/

Your blog is great! I love all the posts concerning Miracles of our Saints...