The Miraculous Return of the Relics of St. Savvas the Sanctified

The Miraculous Return of the Relics of St. Savvas the Sanctified - Commemorated on October 25 (http://pravicon.com/images/sv/s1812/s1812006.jpg)

St. Savvas the Sanctified during his lifetime told his disciples that his incorrupt body would be removed from his monastery and later would rest in the Lavra, which he founded. He said this return of his relics would come before the end of the world. This prophecy was fulfilled when the holy relics of St. Savvas were stolen by the crusaders of the First Crusade (1096 - 1099) together with many other relics and brought to Venice, Italy where he was enshrined in a church dedicated to St. Anthony. Nearly nine centuries later his relics were returned to Israel.

Though it is commonly recorded that this gesture on behalf of the Pope was made merely as an ecumenical gesture, such as that of the skull of St. Andrew in Patras, with regards to the return of the relics of St. Savvas there is more to the story. In fact, it was St. Savvas himself who was urging Pope Paul VI to have his relics returned, appearing first to his predecessor Pope John XXIII in his dreams and causing a scene in his reliquary.

Fr. Seraphim, the Abbot of St. Savvas Lavra, explains everything as follows:

"The Pope did not give us the holy relic because he loved us, but because he [St. Savvas] would constantly appear to him [Pope John XXIII] and would bother him to have his relics returned to his monastery. When the Pope died he did not take the wishes of the Saint into account, so he appeared again to his successor [Pope Paul VI]. Even in the church where his holy relics were treasured in a glass coffin, he would hit the glass and cause trouble, frightening the guards and the Latin monks."

When the Orthodox representatives arrived at the Church of Saint Anthony in Venice they wondered if indeed these were the relics of Saint Savvas. Fr. Seraphim observed every inch of the incorrupt relic to see if he could see a sign of authenticity. He noticed that one of the eyes of St. Savvas was missing. This proved it for him, since in his biography it is said that the Monophysites removed one of his eyes. Moved by this Fr. Seraphim would not leave the side of the relics till they arrived at his monastery. Even when the holy relics arrived in Athens where they were to be venerated by the faithful prior to the return, Fr. Seraphim stood all night guarding the holy relics while everyone else was sleeping. Metropolitan Kyriakos of Nazareth describes the scene as if Fr. Seraphim and St. Savvas were having a conversation that night.

A problem arose when it came time to dress the holy relics in Orthodox vestments, since the Latins had dressed him in Latin vestments. After nine centuries it would be impossible to manoeuvre the body so as to put on the rason, the monastic schema and epitrachelion among other things. To further complicate matters, the hands of St. Savvas were crossed over his chest. Metropolitan Kyriakos of Nazareth describes what then happened as follows: "We then saw Abbot Seraphim kneel before the holy relics and pray for a good amount of time. At one point he arose and did prostrations and lifted the arms of Saint Savvas as one would a living man before the amazed eyes of us all." They were able to change the vestments without a problem in Venice before the return to Jerusalem.

When the glass coffin arrived at the Piazza San Marco on the pier, there was a gondola that transported it by escort to an area near the airport. In a strange coincidence it was the same pier the sacred relic had disembarked centuries ago. Countless pigeons were gathered there, as if they were there to honor the event. Even many years later, when Fr. Seraphim and Metropolitan Kyriakos would reminisce about those days, they would always talk about the pigeons.

When the holy relics finally arrived in Jerusalem it was first brought to the Church of the Resurrection for many days. Here the women could venerate the holy relics prior to being brought permanently to the all-male monastic Lavra of St. Savvas. Fr. Seraphim tells of a certain miracle at this time in Jerusalem. An Orthodox nun who was waiting to venerate the holy relics had doubts over whether or not the Latin's had indeed given the authentic relics to the Orthodox. It was then that she saw the head of St. Savvas lift and turn to her, then it returned again in its place. Her joy removed all doubts.
(http://www.johnsanidopoulos.com/2010/12/miraculous-return-of-relics-of-st.html, see the following for Greek accounts: http://www.impantokratoros.gr/1D95BED0.el.aspx, http://romfea.gr/index.php?option=com_content&view=article&id=9665:-46-&catid=25:2009-12-18-08-37-46) 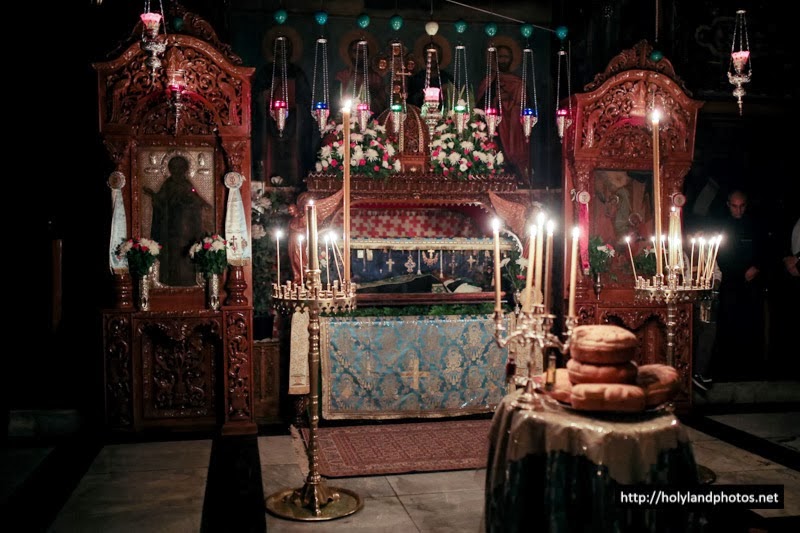 The holy, incorrupt and wonderworking Relic of St. Sabbas the Sanctified, treasured in his Holy Lavra. Photograph from the feast of the return of St. Savvas to his monastery, in 2013 (source)

A brief account of a recent celebration of the feast of the Return of St. Sabbas' Relics
"On Wednesday October 25th 2011, in the Holy Lavra of St. Sabbas the Sanctified, in the desert of Judea, there was a great and radiant celebration of the 46th anniversary of the transferral of the holy and incorrupt body of St. Sabbas, from Venice. The feast and festival was presided over by the Blessed Patriarch of Jerusalem Theophilos.

The church was packed with a multitude of pilgrim priests, monks and laity from Greece (from Mount Athos, Fr. Antipas from Karyes chanted for the feast), from Cyprus, and from as far as Switzerland and France, along with many Arab Orthodox from the flock of the Greek Orthodox Patriarchate of Jerusalem from all around the Holy Land.

The preparation and the hospitality was great of the tireless and chosen Fr. Evdokimos, the spiritual father of the Lavra, and that of all of the Sabbaite fathers.

The church, the katholikon of the Monastery reminded one of heaven, amid the multitude of vigil lamps, in which the holy and fragrant incorrupt relic of the Saint, amid a multitude of flowers, brought to mind paradise, and the glory of the good things and rewards of the heavens...

St. Sabbas the Sanctified was a great defender and proponent of our holy Orthodoxy. He worked a multitude of struggles, together with his friend, St. Theodosios the Cenobiarch, against heretics. St. Sabbas is a prototype for us today, and may we have his prayers and intercessions. He is seen also as the protector and helper of those who suffer from cancer, and of childless couples. A multitude of miracles and healings are recorded daily by the Sabbaite monks of the Jordanian desert, and by the Elder Evdokimos in the Holy Land."
Archimandrite Ignatios is the Proistamenos of the Holy Monastery of the Shepherds in Bet Sachur, a dependency of the Holy Lavra of St. Sabbas the Sanctified.
(http://romfea.gr/index.php?option=com_content&view=article&id=9665:-46-&catid=25:2009-12-18-08-37-46)

For the life of St. Sabbas and information about his Lavra, see: http://full-of-grace-and-truth.blogspot.com/2009/12/st-sabbas-sanctified-and-his-holy-lavra.html. 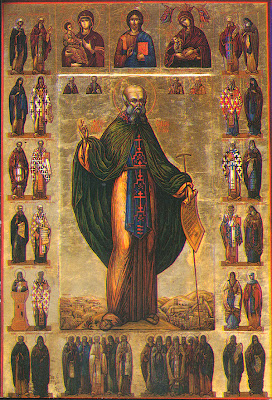 Through the prayers of our Holy Fathers, Lord Jesus Christ our God, have mercy on us and save us! Amen!
Posted by Agioi_Anargyroi at 9:17 AM