St. Paisios on the death of children 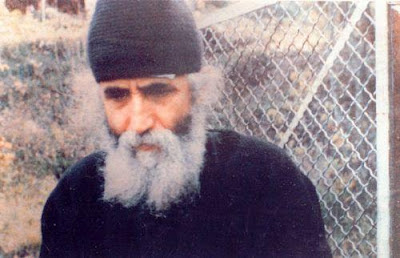 St. Paisios on the death of children (amateur translation)

God arranges things correspondingly. When I hear of the death of some youth, I mourn, but I mourn as a man. Because, if we examine things more deeply, we see that, the older someone gets, the greater struggle he has, and the more sins he adds. Especially when he is wordly, as the years pass by, instead of his spiritual state improving, it gets worse with cares of life, with injustices, etc. Because of this, it is more triumphant when God takes a youth.


-Elder, why does God allow so many young people to die?
No one has a say with God when he will die. God takes each person in the best instant of his life, in a special way, for him to give up his soul. If He sees that someone will become better, He allows him to live. If, however, He sees that he will become worse, He takes him, in order to save him. There are some further who have a sinful life, but have the attitude to do good, and He takes them near Him, before they are allowed to do it, because He knows that they would do good, if only He would give them the chance. It is as if He tells them: “Don't tire yourself; your good intentions suffice.” With others, because they are very good, He decides to take them near Him, because Paradise requires flower buds.


Naturally, it is difficult for parents and relatives to understand this. They see that a small child dies, that Christ took a little angel, and the parents cry and wail, while they should be joyful, because, do they know what would happen if he grew older? Would he have been able to have been saved? When we left Asia Minor by boat in 1924 to come to Greece, I was a baby. The boat was full of refugees, and, as my mother had me in swaddling clothes, a sailor trampled on top of me. My mother thought that I had died and began to cry. A fellow villager of ours opened the swaddling clothes, and confirmed that I had not been hurt at all. If I had died then, I surely would have gone to Paradise. Now that I am so old, and [though] I have done so much asceticism, I am not sure that I will go to Paradise.


But parents can also be helped by the death of children. They should know that, from that instant, they have an intercessor in Paradise. When they die, their children will come with the six-winged angels to the gate of Paradise to greet their soul. This is not a small matter! To small children who were further burdened here by sicknesses or by some disability, Christ will say: “Come to Paradise, and receive the greatest portion.” And then they will tell Him: “It is beautiful here, our Christ, but we want our mommy to be near us.” And Christ will hear them and save the mother also in some manner.


Of course, mothers should not reach the other extreme. Some mothers believe that their children who died became Saints, and they fall into error. One mother wanted me to give me something from her child who died as a blessing, because she believed that he became a Saint. “Is it blessed,” she asked me, “for me to give away his things?” “No,” I told her, “it is better to not give them away.” One other had attached a photograph of her child who had been killed by the Germans to the Crucified One on the evening of Holy Friday, and said: “And my child suffered like Christ.” The women who were sitting around passing the night by the Crucified One let her go, so that she would not be wounded. What could they say? She was [already] wounded.
(source) 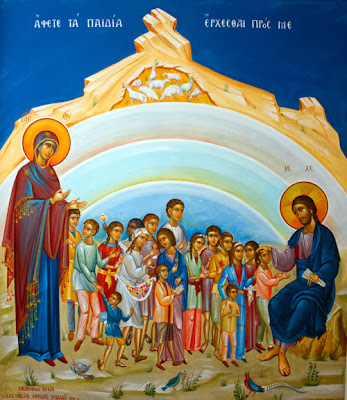 Christ an the Theotokos with children: "Let the children come to me..." (source)


Through the prayers of our Holy Fathers, Lord Jesus Christ our God, have mercy on us and save us! Amen!
Posted by Agioi_Anargyroi at 1:15 PM