St. Paisios on Panagia liberating the Holy Mountain from the Turks 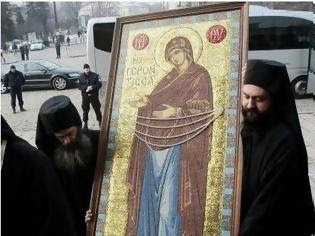 St. Paisios on Panagia liberating the Holy Mountain from the Turks (amateur translation)
Note: Between 1821 and 1830, Mount Athos was occupied by Turkish soldiers. They eventually left the Holy Mountain on St. Thomas Sunday, which is an additional reason why all of the Athonite Fathers celebrate this feast with such rejoicing. Below is a beautiful quote of Elder Paisios attributing this to the Panagia.

The good God ordains everything in the best way, but much patience and care is needed, because many times, when people struggle to free themselves from the net, they get tangled further.

God with patience untangles them. This situation will not go far. God will take a broom!

In 1830, because there were many Turkish soldiers, for a period of time, at Iveron Monastery on Mount Athos, there did not remain a single monk.

The Fathers had left, some with the Holy Relics, some to help in the [Greek] Revolution.

One monk would come from afar to light the vigil lamps and to sweep.

Inside and outside of the Monastery was the Turkish army, and this poor monk that was sweeping said: “My Panagia, what will happen with this situation?”

He prayed once with pain to the Panagia, and he beheld a woman approaching—it was the Panagia—who shone and whose face was radiating light.

She took the broom from his hand and said: “You don't know how to sweep well; I will sweep.”

And she began to sweep.

Later she disappeared into the Holy Altar.

And in three days, all of the Turks had left!

They were cast out by the Panagia.
(source)
Christ has risen from the dead, by death he has trampled on death, and to those in the graves given life!

Truly the Lord is risen!

Posted by Agioi_Anargyroi at 4:43 AM