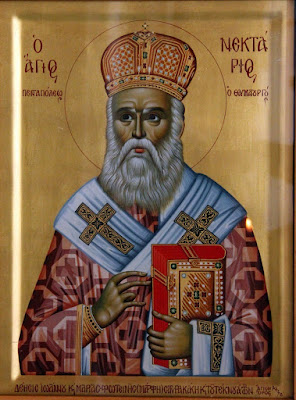 "In 1996, at the age of 7, my twin brother was hit with a rare illness and we went to the Children's Hospital "Agia Sophia" for a whole month. The doctors, after a few days, believed that my brother had osteomyelitis. They told me that it could even be worse than they thought! They told us that he must go to surgery.

In the evening, before the day of his surgery, my brother saw in his sleep St. Nektarios. He showed him a red geranium, and told him to pick it from the bones of the Saint [i.e. the flowers on top of the Holy Relics]. In the morning, he told the dream to our grandmother, who slept that night in the hospital with him, and he asked her if there was a Saint named Nektarios, and he tried to describe the flower (he didn't know the name, because he was only seven years old), saying it was the flower that we have in the house!

The surgery occurred and it was a success!

The next day, he saw in his sleep the grave of St. Nektarios on Aegina, and he told us that he was sitting underneath the pine tree which is above his tomb. I should tell you that we had never gone to Aegina before. We later went as a family to venerate the Grave of the Saint in thanksgiving, and we were struck to see red geraniums that St. Nektarios gave him on top of his tomb! From then on, the Saint is the protector of our family, and most likely always was, even though we didn't know it..."
(source)


Through the prayers of our Holy Fathers, Lord Jesus Christ our God, have mercy on us and save us! Amen!
Posted by Agioi_Anargyroi at 2:38 AM