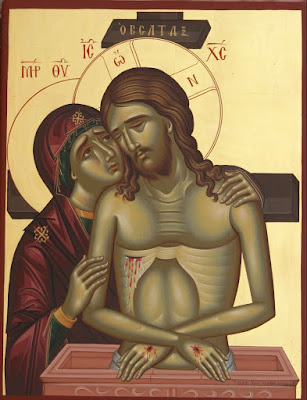 Christ crucified, in extreme humility, beside His Most-holy Mother, the Theotokos (source)

And seeing Him upon the Cross, She was pained so much in her heart...Because of this She can understand every painful existence, and She suffers together with every human who is pained, because She exactly knows what "pain" means. When the soul is seized by the love of God, then, O, how gracious, beloved and joyous is everything! Love, however, goes together with sorrow, and the deeper the love is, even greater is the sorrow.

The Theotokos never sinned, not even in thought, and She never lost grace, and even She had such great sorrows. When she stood beside the Cross, then Her sorrow was impassable like the ocean, and the pains of Her soul were incomparably greater than the pain of Adam after the expulsion from Paradise, because Her love was incomparably greater than the love of Adam in Paradise.

And though She survived it, She survived only with divine power, with the strength of the Lord, because His will was for the Theotokos to later see the Resurrection, and later, after His Ascension, that She might remain the consolation and joy of the Apostles and of the new Christian people. We do not reach the fullness of the love of the Theotokos, and because of this we cannot fully conceive of the depth of Her sorrow.

Her love was perfect. She loved her Son and God incomparably, but She also loved the people with great love. And what did She sense, then, when they whom She herself loved so greatly and whom She so greatly pained for their salvation, when She saw them crucifying her beloved Son?

The Theotokos did not relate in the Scriptures Her thoughts, nor her love for Her Son and God, nor the sorrows of Her soul at the hour of the Crucifixion, because even then they couldn't conceive of it. Her love for God was stronger and more fervent than the love of the Cherubim and Seraphim, and all the powers of the Angels and Archangels were amazed with Her.
(source) 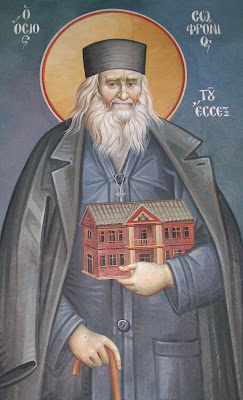 
Through the prayers of our Holy Fathers, Lord Jesus Christ our God, have mercy on us and save us! Amen!
Posted by Agioi_Anargyroi at 7:15 AM