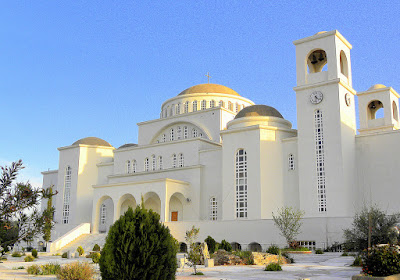 Monastery of the Transfiguration of Christ built by St. Porphyrios in Milesi, Attica (source)

Brief history of the Monastery
The Holy Monastery of the Transfiguration of Christ (celebrated August 6th), though technically a dependency, was founded by St. Porphyrios of Kavsokalyvia in Milesi, Attica, geographically between Oropos and Malakassa in the northern suburbs of Athens.

From one's first step as a pilgrim in the area, one encounters the sanctity of the place and the total silence. One is struck by the astonishing Holy Church and the beautiful green surroundings.

A multitude of people hasten to the holy Hesychasterion which honors the memory of the Venerable Porphyrios on December 2nd, the day of his repose, in order to partake in the grace of this Saintly Elder.

The building of the monastery began in 1981, and the building occurred in stages, with the Katholikon being founded in 1990, with permission of Archbishop Seraphim of Athens. The walls of the church were completed in the spring of 1992, a few months after the repose of St. Porphyrios. 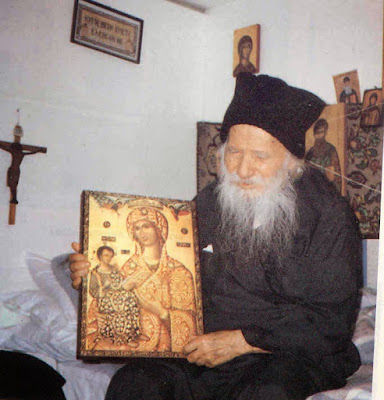 St. Porphyrios on his bed at the monastery near the end of his life (source)

After St. Porphyrios retired from the chaplaincy at the Polyclinic of Athens (St. Gerasimos near Omonoia), he lived a few years at St. Nicholas in Kalisia, Penteli, but ultimately moved to Milesi of Malakassa, where he continued to live humbly, struggling with his illnesses.

That place became a true pilgrimage. The Elder chose obscurity, but God glorified him. "The world," as he wrote later, "took me from my good place, and everyone calls me a saint. However, I feel that I am the greatest sinner of the world...and I entreat all those who knew me to pray for me." 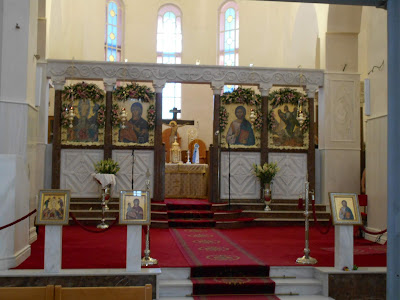 The interior of the Katholikon (source)

His last breath was humble and far from the world in Kavsokalyvia of Mount Athos, on December 2nd, 1991, as he had been informed by God that his end was near. His repose was known only by his fellow cell-mates in Kavsokalyvia, and so his funeral was humble in the Garden of the Panagia.
(source)

The Monastery is open from sunrise to sunset, except for being closed from 2-4PM daily. Vespers is served daily at either 5PM (winter hours) or 6PM (summer hours). Orthros and Divine Liturgy are served every Sunday from 7-10AM.
(source) 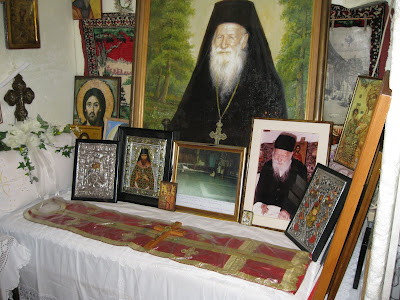 Pilgrims to the monastery can venerate the bed and personal articles of St. Porphyrios, a place full of grace (source)


Through the prayers of our Holy Fathers, Lord Jesus Christ our God, have mercy on us and save us! Amen!
Posted by Agioi_Anargyroi at 6:44 AM