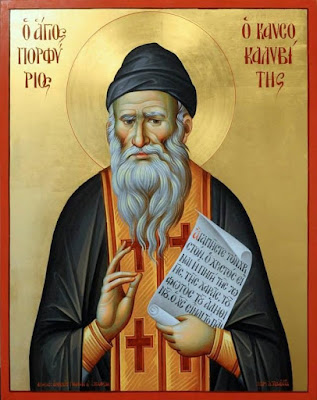 One Sunday morning, St. Porphyrios of Kavsokalyvia was traveling together with a well-known older villager towards the village church. On the road, they met a group of six or seven young people traveling in the opposite direction. The villager asked the young people:
"Where are you going guys?"
What did they respond? "To the coffee shop."
Then, the villager (who was very austere) told them:
"Aren't you ashamed, today on Sunday morning, of going to the coffee shop instead of church? Are you Christians?"
And he pelted them with a zealous sermon. The young people cursed at him and continued on their way. St. Porphyrios was silent. The villager, full of excitement and self-assurance, said to the Elder:
"Did I speak well to those brats?"
And St. Porphyrios responded: "No, you did not speak well..."
The villager, who was expecting congratulations, was embittered by the response of the Saint. They reached the church and St. Porphyrios went to the Holy Altar and the villager took a seat in church.
Not even a half hour passed, until all of the young people of that group entered the church! The villager was rubbing his hands out of satisfaction. As soon as the Divine Liturgy was finished, St. Porphyrios left the Holy Altar, and the villager hastened to meet him and pointed to the young people, saying to him:
"You said that I didn't speak well? They thought of my words and came to church."
And St. Porphyrios smiled, and explained to him that they came because he was praying silently for them and not that they were moved by the villager's stance....
In reality, prayer moves and transforms other people, not our words... Because of this we should not [primarily] speak to others about God, but speak to God about others.
(source)


Through the prayers of our Holy Fathers, Lord Jesus Christ our God, have mercy on us and save us! Amen!
Posted by Agioi_Anargyroi at 9:06 AM